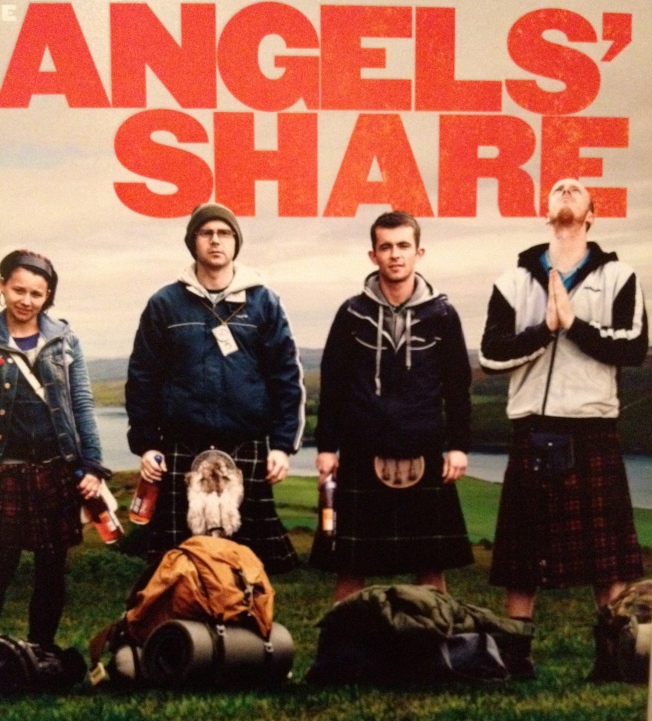 Angels’ Share introduces us to a group of Glasgow’s young offenders as they spiral down into nowhere…and then it adds hope, urgent, illogical hope.

It’s a ninety minute diamond of a film, with an age-restriction of 15, some on-your-nose violence, and great publicity for whisky and Irn-Bru. It also shows the meaning of useful compassion, and it feels real.

Shown in cinemas in the UK in June 2012, and released on DVD the following September, the film is directed by Ken Loach and the screenplay is by former lawyer Paul Laverty.

Robbie, the lead role, is played by Paul Brannigan. We meet him in court alongside other young offenders as they receive community sentences. Most offences are petty apart from Robbie’s, which is grievous bodily harm. He only avoids a jail-term thanks to his girlfriend’s pregnancy, but then has to face the feuding hatred of his estate.

The film would be bleak and brutal if it weren’t for Harry, the community service supervisor played by John Henshaw. Harry’s solid generosity is the best chance, maybe the first chance, most of the offenders have had. It is Harry who arranges a trip to a distillery for them all, unwittingly introducing the youngsters to the possibilities of whisky.

He smacks into violent dead-ends so hard that it’s tempting to give up, but his friends and their Glaswegian banter glue life back together in such a way that it’s impossible to leave. We want to know what happens.

Jokes and the speed of the sequences tumble us from fright to laughter, from the point of retching to the impossible world of fine whisky.

The pace is skilful and held together brilliantly by a compelling cast whose minor characters fit their roles almost as completely as the leads. An example is the restorative justice scene in which Robbie is taken to meet his victim’s family. The plain room fills utterly with shame as the victim (played by Roderick Cowie) relives the night Robbie attacked him.

I loved the film. Built around the themes of joblessness, and the holes in society, it fills its spaces with laughter and pain…and the possibilities of hope.

For my money, to watch will cost less than a dram, and the glow will last far longer.