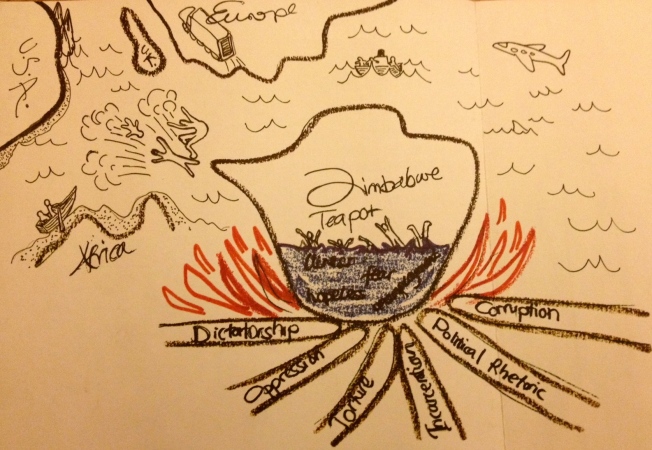 In 2013 Hasani, who writes protest poetry and advocates for recognition of human rights and justice in his homeland, Zimbabwe, was on stage at the Bath Literary Festival as one of the cast in “Souvenirs”.  The play was written by the cast, who were all members of Freedom from Torture’s creative writing group – Write to Life.

Sadly I never got to see the performance, but here is a link to the organisation that nurtured the creative writing group that wrote the play.

My thanks to Hasani for the image above which captures so well the violence and corruption that have done so much damage to Zimbabwe.

One of the most irritating travellers I’ve ever met ... . Thanks to Eland Publishing for a copy of this book about a young Englishman and his travels around the East in 1834. If you want to know the meaning of supercilious, reading this is a good way to find out. Also fascinating about some of the quarantine arrangements they had then for the plague. . If you’d like to know more there’s a review of the book on my blog, The Phraser. . #eothen #elandpublishing #williamkinglake #travelwriting #bookreview #thephraser