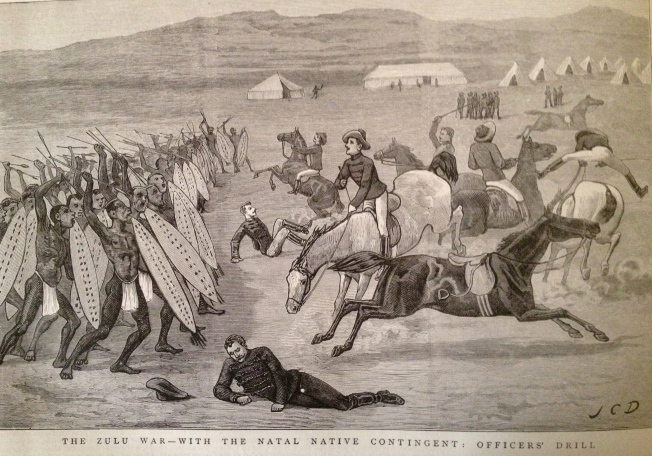 The Zulu War – with the Natal Native Contingent: Officers’ Drill

The way the world looked from London in May 1879

The Graphic, an illustrated weekly newspaper from London, takes a sweep around the world and hands back what it sees.   Here are some cuttings – the text and illustrations are as produced in the original publication.  The award of the Victoria Cross to the “gallant” defenders of Rorke’s Drift is covered in a paragraph.

I have added links to similar articles in recent news – if you have the time please click.  Not much seems to change except in the matter of gloves.

THE LONDON CABMEN.-Like most other men in easy circumstances, the Prince of Wales has doubtless found it a great comfort and convenience to bowl about in a Hansom cab, and we are glad that he expressed his gratitude in a practical form by agreeing to take the chair at the banquet of the Cabdrivers’ Benevolent Institution.  This is a snob-ridden country, and there are a good many people in it who, although hitherto oblivious of the merits of a deserving charity, will cheerfully subscribe when they see a real live Prince of the Blood Royal making a speech in its behalf.  The Prince spoke effectively and unaffectedly, as he almost always does, but we think he said a little too much in praise of the cabmen’s honesty.  It is rather of the nature of a left-handed compliment to pat a man on the back for not being a thief, and, according to the Prince, although cabbby takes a wonderful lot of lost property to Scotland Yard, he is not immaculate on the subject of umbrellas.  There were, we observe, eight genuine cabbies present at the banquet.  We wonder whether they were impressed by the spectacle. It does not indicate a very high standard of civilisation that it should be thought necessary for people to go through all this guttling and guzzling, in order to put a guinea or two in the treasury of a charitable institution.  Why not be content with far simpler and more wholesome repast, and give the balance to the charity?  ….

WITH THE NATAL NATIVE CONTINGENT – OFFICERS’ DRILL.–In order to accustom the horses to the noise of the rattling of the shields and assegais, which is very startling to ears unfamiliar to the sounds, and which is a mode of approaching the enemy usual with the Zulus, it was thought advisable for some of the officers to charge our native soldiers, who, on the other hand, were to rush on like the enemy.  Officers and men duly fell into their respective lines, ‘charge’ came the word, away went the opposite parties at one another, the natives rattled their shields, and nearly all the horses were so astonished, that away went some, others stopped, or kicked and plunged or reared, others turned tail full speed, while many a gallant warrior sprawled ignobly on the ground.  Next time the riders were cautious!”

MISCELLANEOUS.–The gallant conduct of the defenders of Rorke’s Drift has received meet recognition from Her Majesty by the bestowal of the Victoria Cross.  The recipients are Lieutenants (now Captains and Brevet Majors), Chard and Bromhead, Corporal William Allen, and Privates John Williams, Henry Hook, William Jones, Robert Jones, and Frederick Hitch, all of the 24th regiment; and it is added that had Lieutenants Melville and Coghill survived they would also have been recommended to the Queen for the same honour.  The Cross carries with it an annuity of 10⁄. to all except commissioned officers.

The Sheffied School Board has established a truant school, in which all children who have not been regular attendants are to be subjected to a kind of semi-imprisonment, being only allowed to go home when their parents undertake to send them to school regularly.

GLOVES WITH THIRTY-TWO BUTTONS are being worn in Paris for full dress; those with eighteen buttons being considered fit only for demi-toilette.

SOME HIGHLY ECCENTRIC BONNETS are reported from Paris this Spring.  There is the “Stewpan,” adorned with a garland of spring verdure, the “Scullion’s Pie,” the “Extinguisher,” usually smothered in poppies, and very pointed in shape, the “Restoration Calash,” a copy of the old style, and the “Learned Dog” bonnet.

GERMANY.–The all-absorbing topic has been the new Tariff Bill, which Prince Bismarck brought forward last week in a most energetic speech, declaring that the first motive for reform was “the need of financial independence for the Empire … the contributions of the various States to the general Exchequer were unequal,” and he desired to see the necessary income raised in the least burdensome form.”  Without entering into the respective merits of Free Trade and Protection, he declared that one thing was clear, that through the widely opened doors of its import trade the German market had become the mere storage place for the over-production of other countries.  These gates must be shut, and the markets reserved for native industry.  “Countries which were enclosed had become great, and those which had remained open had fallen behind.” …

UNITED STATES.—An extraordinary murder, resulting from religious mania, has been committed at Pocasset, Massachussets, by a man named Charles Freeman, a member of the Second Advent Congregation, who had been attending Revival meetings.  Declaring that he had received a divine revelation, he stated that God had directed him to sacrifice his little daughter, five years of age, and that she would rise again in three days.  He accordingly improvised an altar, and killing her, poured out her blood upon it.  His wife assented to the murder, and both prayed before the altar.  He then called an Advent meeting, and told the members of what he had done, and then, driving everyone from the house, barricaded the doors and windows.  Next day he conducted an incantation service prior to the resurrection, but in the afternoon he was arrested, and, together with his wife, taken to prison – declaring that he was a second Abraham obeying a divine mandate.

MISCELLANEOUS. — From SOUTH AMERICA we hear that the declaration of war against Peru and Bolivia has been received with great enthusiasm throughout Chili.  Two thousand Peruvian troops and 1,000 Bolivians are marching to invade Chili, and 3,000 Peruvians are in garrison at Iquique.  The Peruvian fleet is being provided with heavier cannon and receiving munitions at Callão.

VARIOUS.– On Tuesday Mr Spurgeon delivered an address at the 15th annual conference of the Pastors’ College, counselling his hearers to rely upon unity and faith, and declaring that he himself did not think the outlook as bad as many supposed it to be.  Some years ago the sceptics fought with courage and dash (like the Zulus), and appeared to win some victories, but now they seemed to have a steady fear of the orthodox.  Unbelief and Freethinking had not yet won the victory, and he troubled ministers to think less about them.  It was possible to mend a road with such diligence as to render it impassable.  They kept on mending the road at such a rate that nobody could go over it, and sinners did not find their way to Christ because of their attempts to block up certain holes which atheists had made.  Let them run the steam-roller of tremendous faith over the whole concern; it would then be a better road, and they might expect happier and increased traffic.