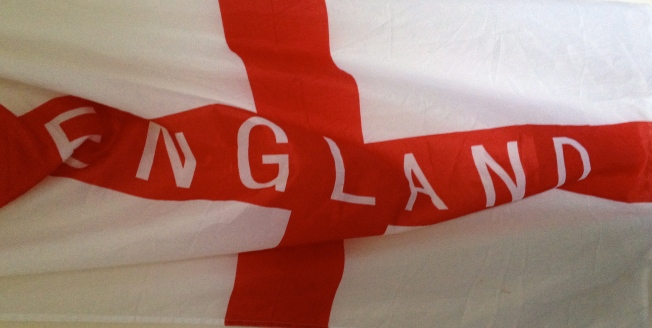 Winter is stuttering into view but the cockles of British hearts are being warmed by perfect turmoil.  The three pillars of UK plc – football, cake and the post – are in a state of flex and flux.  It has been an exhausting ten days.

The Royal Mail went on sale on Friday 11 October 2013.  Goodbye to the historic postal service that Henry VIII got on the road in 1516 and the public got a taste for in about 1635.   We’ve been waiting around for the mail for centuries and now it’s gone – sold off by us, the 2013 lot.  The shiver-up-your-spine part is why was Mrs Thatcher too worried to do what we’ve just done?  This question will keep us in a fret for decades.

Tuesday night saw one of the most nerve-shredding clashes in British television history – England took on Poland in a World Cup qualifying match on ITV while, at the same time, Beca and others took on Ruby in The Great British Bake Off on BBC2.

England had to slam home victory past the red-chested Polish defence while Beca and company had to MasterChef an opera cake to the laser-sharp standards of Mary Berry CBE and Paul Hollywood.

Tension?  This was tension – beautiful tension.

On ITV, England’s men raced over Wembley’s green trying to fly a ball past the 6′ 5″ Polish goalkeeper, Wojciech Szczesny.  Just his name told us it was going to be difficult and it was – 41 pounding minutes passed before Wayne Rooney arrowed an elegant header into the right hand corner of the net.

The nation could breathe for a few seconds …  unless they had switched over to BBC 2.

There, in the baking tent, minutes either side of Rooney’s majestic delivery, Kimberley was perfecting lime layers, Beca was dabbling with banana essence and Frances was lavishing lavender and lemon into her delights.  Our screens were ticking in all directions with clock-stressed high achievers.  For the sofa-fans, even our most hardened, it was exhausting.

Thankfully the opera cakes peaked at 8.50 and the judging decisions were decorated and dusted within a few minutes.  Beca got her marching orders and the others a few minutes to compose themselves before the cameras zoomed in to give us the joy of carving up the left-overs.  Then, a quick flick, and back to the football … still only one goal to England and Poland looking dangerous.

The stats tell us that at one point eleven million of us were glued to the flying feet of Andros Townsend.  With him on the pitch, and after all the cake and glory of the bake off watched by 5.6 million of us, it did seem possible that England might just win.  Surely that speed, plus the steel of Gerrard, would gift the ball to the finishers for England?  It was a tea-cup jangling wait but, with only four exhausting minutes left, Steven Gerrard MBE wrenched us out of our misery as he manfooted the ball into the back of the net.  Hurray!

The delicious joy of it –  England is off to Brazil (the squabbles have started already – something about an astronaut and a monkey) and our best bakers are even now twiddling their frills in preparation for next week’s final!

Do we really mind about the Royal Mail?