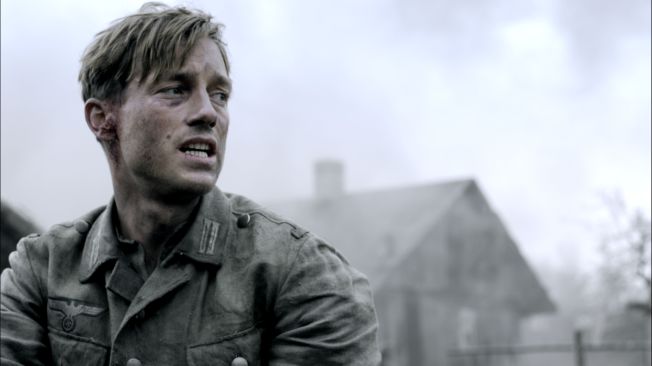 I am not a fan of war movies and the title of this series is only a flea’s finger from my normal cut off point.

Why did I watch it ?  Curiosity.  The programme had been discussed on Radio 4 with a concluding comment that suggested that the German producers would like to hear what the British thought about the series.

I forced myself in front of it on Saturday evening gloomily convinced I would not be entertained.  I was wrong.

Absorption was instant.  Everything about episode one floods with emotion and with acting so supple that the situations feel real and engaging.  We’re not asked to imagine ourselves into the Nazi mindset or into the horrors of Auschwitz –  just to believe in the ordinariness of being young and eager.

The date is 1941, we’re in Berlin and Hitler is about to invade the Soviet Union.    Five young friends, one of whom – Viktor (Ludwig Trepte) – is a Jew, are being enveloped by a war unfurling on a scale they can only understand in terms of imminent victory for Hitler.  His is the regime they have grown up with and in whose name three of them are about to leave for the Eastern Front – the two brothers, Wilhelm (Volker Bruch) and Friedhelm (Tom Schilling) as soldiers, and Charlotte (Miriam Stein) as nurse.

Their farewell party, before meeting again in Berlin for Christmas (at least that is what they hope), is in an ordinary room with a record player, a sofa, alcohol and the 1940’s equivalent of a group selfie.

The actors draw out disbelief and lure us alongside them, inside their totalitarian state.  Once there it’s shocking to realise, even for a split second, that our certainties might be unravelling alongside theirs.

On Saturday I could not have switched channels if I had wanted to. I was entertained and provoked by the vivid complexities that suddenly punched home. I was made to think.

I’ve watched one subtitled episode and I plan to watch the rest.  I want to know how it will turn out for the young singer, Greta (Katherina Schuttler), and her Jewish boyfriend.  I feel anxious for the naive enthusiasm of Charly the nurse, and a part of me has been frozen in the mud alongside officer Wilhelm, and his younger brother, the thoughtful Friedhelm.

The series, commissioned by German broadcaster ZDF and directed by Philipp Kadelbach, has rich, hand-made detail and a quality that comes with real care.  It took eight years to produce, was filmed across Germany, Latvia and Lithuania, and it is personal.  The producer, Nico Hofmann, said that the part of the young leader Wilhelm was used to depict Hofmann’s father’s own journey through the war and the changes it meant for him.