The role of a padre serving with the Royal Army Chaplains’ Department (RAChD) is to minister to soldiers and their families, to give them pastoral, spiritual and moral support. The padres are commissioned as chaplains but wear officers’ rank, leaders but without command. They are sent wherever soldiers are sent, and are moved individually between units every two to three years.

Reverend Alan Steele MBE, senior padre of 16 Air Assault Brigade based in Colchester, has accompanied soldiers on two full operational tours to Afghanistan, as well as tours to Macedonia and Northern Ireland.

“I think as padres we’re in a tremendously privileged position. We’re Christian clergy who are an integral part of an organisation that values us and wants us to be there.”

I ask Steele if he feels confident that padres on operational tours can make a difference.

He is emphatic: “Yes. Definitely.” He says: “there is very little that you cannot effect for the benefit of the blokes.”

He says it could be anything from requesting some leniency over a minor issue to dealing with some of the really big and difficult questions such as leadership on kinetic operations.

“The padre is almost the only person in a battle group who can counsel, confront and challenge the chain of command.”

Then there are the fatalities – “the most shocking events, if you like, for people”.

I ask if it is always the padre’s role to identify the dead.

“If we go back to the Second World War, to the Korean War, it was the chaplain who would be expected to go and recover the dog tags from soldiers killed in combat. There was a field burial unit then that would go around with the chaplain to do the burials. We don’t do field burials any more of our own people – the tendency now is to repatriate them – so that burial unit doesn’t exist any more but, historically, it has been the padre’s role to do the identifying of the dead.”

Steele explains that early on during Herrick 8 he witnessed a young corporal break down when asked to identify a soldier who had been caught in a blast. He said that he and the Regimental Sergeant Major (RSM) then agreed that “as far as was humanly possible”, they would do the identifications themselves to spare others the task.

Steele has faced the trauma of losing soldiers he has come to know well. He refers again to Herrick 8.

“Because I had been with 2 Para previously I knew loads of the blokes already and a number of them I was very, very fond of and when you see people you know getting killed it’s quite …” his voice tails off.

He pauses then begins again.

“So you’re going through a process of grieving yourself but you’re providing a vehicle for soldiers to appropriately grieve and appropriately commemorate their comrade or friend. I think that’s really important.”

He’s happy to acknowledge that there are soldiers who are not Christian. He counts many of them amongst his friends. “I know that a number of them are agnostic at best, atheist at kind of most extreme. I had lots of conversations with atheists who would say to me: ‘Padre, if I die I don’t want you doing any of that religious stuff.’ So I would say to them: ‘Do you want the Regimental Collect?’ ‘Of course I want that.’ ‘Well, that’s kind of religious.’”

He says that when there were fatalities he would try to hold a commemoration service within a week for the soldier’s ‘mates’ and as close as possible to where the incident happened. The service would consist of a Bible reading and a couple of prayers, including the regimental collect, but he would always leave the bulk of the time as silence.

“I would say to them: ‘We’re going to have a time of silence. For those of you who would like to you can pray. For those of you who don’t want to pray, or don’t believe in God, then this is time for you to remember Jim (or whoever) and to think about him, and to think about his family and so on.’ Almost invariably I would have soldiers coming up to me afterwards saying: ‘Thank you so much for that silence. It was really helpful.’”

He says that the format for such services varies between padres – there is no set formula. However, when it comes to how padres conduct themselves generally he believes that, as they all hold a commission from the Queen and are often amongst the oldest and the better-educated members of a regiment, padres should have: “a certain gravitas because of what we represent and who we are.”

Steele, who has a degree in classics and archaeology adds: “Also, presumably, we all have a vocation from God.”

Rev Alan Steele waiting to patrol out to another location 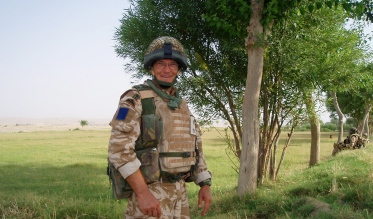 Rev Alan Steele out on the ground

My thanks to Reverend Alan Steele MBE for being so generous with his time and to the Royal Army Chaplains’ Department for helping to arrange this and other interviews.

2 thoughts on “Military operations and the padre: reasons for being there”