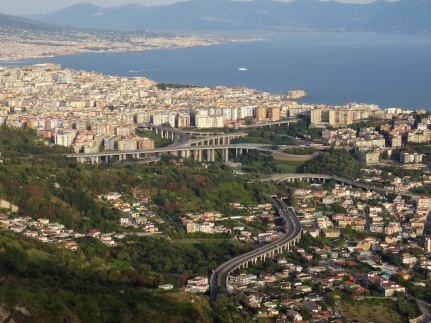 Naples, two thirds of the way down Italy’s west coast, is the country’s third largest city with a population of 2.373 million. It sprawls up from the bay at its feet and is separated from the Amalfi Coast by Vesuvius and Pompeii. Centuries of geologists, historians, artists, and adventurers have all visited its treasures and each has left their mark on a city that is now tourist-wise and wary. This summer we called in – our first encounter of substance was with the tangenziale.

Mid-August, three in the afternoon, and we were on the Naples tangenziale for the first time in our lives. This fine, pothole-free highway bypasses the city with tolls at each of its innocent exits.

It seemed so simple when we began. There were tunnels and speed limits, views to see and the space to see them. Tutto bene until we took our first misguided, toll-barrier exit.

Suddenly our ribbon of tarmac frayed and its markings faded. Clear blue signs turned into billboards of tiny arrows and strange names that led to roundabout rapids. We floundered, car-horned by the ‘bumped’ and the ‘not-so-bumped’ as we struggled to the edges, to the litter and rampant bamboo-cane. To stop, even to sensibly pause, was greeted with blaring disbelief.

We clutched at the vitals of our ‘not-yet-bumped’ car and edged on.

The ‘bumped’ and the ‘not-so-bumped’

The sign when it came it was so small we nearly missed it – a slither of green and the word ‘tangenziale’.
We bobbed after it, desperate to be back among straight lines. Relief was brief. Vesuvius had moved. We were trapped now in a new direction and forced on fast to wherever.

To our right, cloaked briefly in sulphur, were the Campei Flegrei, Virgil’s mythical gates of hell. Unnerved we exited amongst the craters, plunged briefly towards one of the most geologically unstable areas on earth, then changed our minds …

The closer we came to Vesuvius the closer Naples came to the rails. Washing, balconies, aerials, oleander, high altitude vines leaned over us in row upon tower-block row. This was not where we should have been. We looped down to another toll.

For the third time in 15 minutes we flung in our 95 cents – ‘arrivederci‘ the metal box grinned as the sun beamed, and we evaporated down to our skeletons.

This time Vesuvius was where it should have been – to the rear. We stayed glued tight for miles until eventually the promised exit came into view.

Finally we flopped off the tangenziale several euros poorer and with our first lesson well-pocketed: Naples is a game of nerves.

Our Fiat is now lopsided with maps.