‘What a beautiful day.
We’re not scared.‘

On a hot weekend afternoon we crammed four bodies into our Fiat 500 and headed down to the Naple’s seafront for a stroll and a pizza. The only obstacle between us and the chef was the tangenziale.

Not a problem we thought. We knew the sudden ins and outs of this fine road. We had the maps. We had the coins. We had a plan. 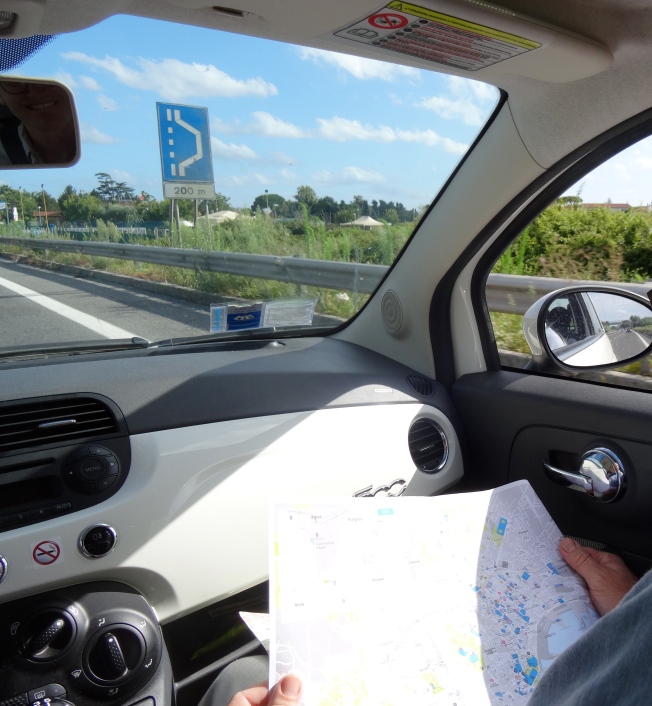 We had a plan

Our last tank fill had been in a self-service petrol station on a twisted road up to the monastery at Camaldoli. The unattended pumps there are in a dark space across the road from steep blocks of flats. We’d managed then and now thought the service areas on the tangenziale would be a spacious, modern doddle.

We swished in like happy lambs, turned off the engine and one jumped out to handle the pump. The rest of us cricked round to watch.

That was when we saw him. We tried to look away but it was too late. Large, and in no hurry at all, the wolf grinned at us from his stool.

“Ingleeesh …” he said and his smile spread. He rubbed his hands but he did not stand up. The pump pootled on.

“Hotel stay …” He stood, large and square. We were trapped on the empty forecourt while the pump trickled. Slowly the wolf moved towards us until suddenly his huge frame bent over the snub of our bonnet.

“No,” we bleated firmly.

He considered, then straightened to his full height. “Radiator? Water?”

We hesitated and he spun to crouch round by the door.

The bonnet, almost on its own, popped wide. The wolf picked up a watering can, sloshed its contents about the engine with one hand while with the other he used a short length of hosepipe to drain the radiator. Job done in a second.

“Par flu. Par flu …” he insisted as we peered in shock through the windscreen at him. He had big hands, a big voice, and apparently he was doing us a huge favour. We scrambled round to join the wolf as he scowled at the brand new, blameless engine.

“Par flu. Par flu … important.” He jabbed a big finger at the empty radiator tube that gulped up at us. From somewhere three bottles of pink liquid were produced, exhibited briefly, then their caps spun off and thick liquid glooped into the tube. At our feet streams of water slunk away across the concrete and around the abandoned hosepipe.

Then the wolf stood back and slammed the bonnet. He flashed his teeth: “Par flu … 45 Euros.”

Our bleats were brief. We paid … too soft, too slow, too Anglo-Saxon, and too shorn do anything else.

We squashed back in amongst our knees and headed on to the tangenziale. The car, baked in 30 degrees of summer sunshine and high on neat, un-digested anti-freeze, had no choice but to get on with it. To save even a slither of honour we had to reach the beating heart of Naples.

‘What a beautiful day.‘

With thanks, and apologies, to We’re Going on a Bear Hunt by Michael Rosen and Helen Oxenbury.

5 thoughts on “Wolfed on the Napoli tangenziale”