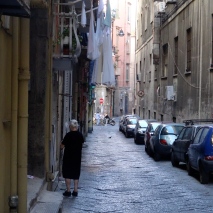 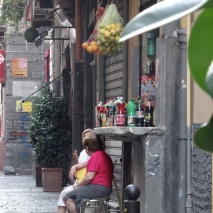 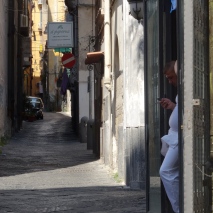 There are more eyes in Naples than there are doorways. In August there is the space to feel them both as they sit out the heat, and watch.

Our role as resident tourists is to provide the entertainment … if we can survive the swirl of the traffic jacuzzi by the seafront.

We were told that August is the month to drive in the city as many Neapolitans leave for the holidays. In hindsight it was good advice – at the time it did not feel like it.

The traffic in Naples has attitude. It streams through guided by common sense rather than highway code. Signs and traffic lights are difficult to see and unreliable due to the inconvenience caused to the hands-included world of the mobile telephone.

That is not to say that this densely occupied city, and its communicators, are in any way disrespectful of life. No – rather they have decided to focus on two rules. These, as explained to us, are: first – pedestrians are guilt-free in traffic accidents; second – so are those on two-wheels (unless they hit a pedestrian).

The way to learn these rules is through frontline experience. It took us several August trips to hone our radar and to learn to aim the Fiat the right way up the great Bourbon tunnels of traffic that pour in and out of the centro.

Each driving adventure was then followed by a walk to try to map the city into our frazzled minds.

Last Sunday, late September, our training notched up a level – Naples was back in town. The traffic jacuzzi had turned into a whirlpool, and the eyes had morphed into crowds.

Once parked we joined the families who crammed the sea-front and the centre – sons and daughters escorted elderly mothers and aunts; young men flaunted their girlfriends; and old men sat and remembered.

The carabinieri were there – spread out in small clumps along the main shopping street of the Via Toledo. They were part of the flow, part of the interaction between espresso and best clothes, between the crowds and the doorways, between the people of Naples and their city.

There was a new mood – more engaged, less watchful and very different to the Rome we had visited the day before where tourists had smothered the monuments and piazzas. We did see the beautiful city but less of its people who we tended to see backed into their taxis, or trapped beside tables to explain menus.

Our hostess in Rome, Italian and lithe as a leopardess, had spent much of her childhood in Naples. We asked what she thought of the city. Her eyes welled with warmth. She said she had wept when they left.

Laughter flashing, she then demonstrated the characters of both the capital and its southern neighbour.

First – she played the Roman and his demand that his listener go and do unto himself what it is normally done by others. In one fizz, she exploded like a firecracker from her toes to her furious fist, the words hissing in a blast between her teeth.

Next – she showed the same message delivered by a Neapolitan. She shrugged, mumbled a few words and gave a dismissive flick of the chin. Her eyes looked away and her fist stayed low.

In both cases the message was clear.

There are only 225kms between the cities – perhaps with Vesuvius in its backyard Naples has no need for dramatics … until there’s football.

Luciano De Crescenzo on Naples and the Neapolitan Character from Steven McCurdy@StoryCollectors on Vimeo.

5 thoughts on “The eyes in the doorways of Naples”