Nothing is ever quite what you expect it to be …

A month ago, freshly arrived, we tried several times to drive through Naples.  That memory is still stuck in crocodile swamp land with a few other tales,  however the tension is easing.

The problem isn’t the roads – many of them could lay down with pride alongside the best autobahns and highways.  Locally the Tangenziale still catches my eye as it tunnels through the volcanic hills then swings on its stilts past balconies and bedrooms.  It’s an urban poem of a road – unabashed and right in amongst the washing.

The ‘Tangenziale’ winding its way through the hills towards Naples

So why the worry?  It’s something to do with the traffic.

In the outskirts of Naples the best, and sometimes only, way to move around is by road.  So … off we all go:  families crowded into every generation of Fiat; scooters wrapped in couples; tiny cars driven as though they were Vespas; crumpled vehicles that limp down the slow lane; undefeated, dented fliers; t-shirts that blast out of nowhere on motorbikes; the elbow in the sun of the lane-weaver taking his time; the confident Alfa Romeos; and the likes of us – nervous visitors in blindingly unblemished cars.

Then there’s the early morning commute into Naples when the less-dented take to the roads.  They know where they’ve got to get to.  When I had to join them for three weeks to reach my language lessons I wasn’t nearly so sure.

I had to learn quickly.  Lesson one: the city is not full of gesticulating, furious drivers; lesson two:  the horn warns rather than rants; and lesson three: skills to aim for are super-aware peripheral vision, telepathic anticipation, and the ability to use a mobile ‘phone while surfing across a wave of oncoming traffic.

At rush hour the Tangenziale is the easy bit.  Even the tunnels are okay once everyone is sorted into two lanes to go through them.  It’s the unrestricted jostle of four to six squiggly lines of cars and scooters, squeezed into dual carriageways that pop the eyes as they sweep round the great bends to merge with a similar front approaching from the side.  The speed isn’t fast but its shift is constant and beeped on either side by the two-wheelers that fly to left and right, then suddenly at right angles.

In the past three weeks I’ve had two bad moments: early on I caused a jam at a tunnel entrance and got abuse from the back of scooter; and then, more recently, I hooted at a tired, mirror-less, brake-light-less car that chose a busy single lane for a leisurely drop-off of three older women.   As first car in the queue I felt it my duty to hoot.  The steady silence, and the unhurried women, still haunt me!

However rebuke and shame are nothing on a morning commute when the Bay of Naples shimmers out to one side with a few fishing boats dotted in front of the blue silhouette of Vesuvius. 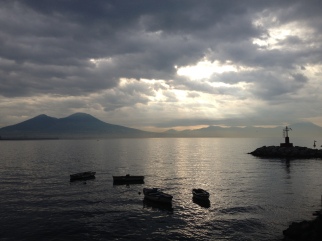 The Bay of Naples after rain …

If you have some time try this website: “100+ things to know if you’re going to Italy”.  I found it two days ago – a bit late.  These are some of its final points:

“85.  Driving in Italy is not terrible.  Keep your right, be careful, but many Italians are terrified to drive in California so you should be just fine.

86.  However, don’t even think to drive in Naples.  Road rules are different from what you’re used to, and despite being incomprehensible to most, they keep the city going.  You’d be the wrench thrown in the perfectly oiled wheel.”

My apologies to Naples if I’ve wrenched anything.

5 thoughts on “Driving in Naples, Italy: spanner in the works”