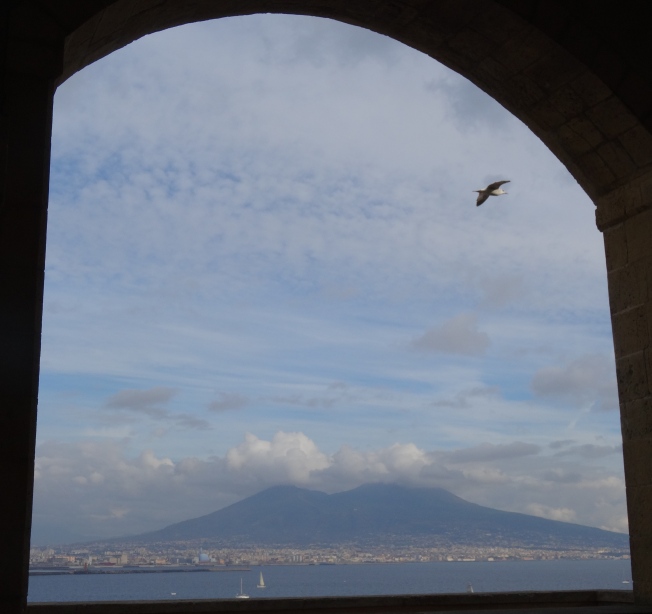 Vesuvius from the Castell dell’Ovo

We should have known better – nothing is obvious about Vesuvius.

The volcano has sat across the bay from us all summer – big, blue and balmy.  It reclines like some artist’s prop, a balance to the curve of sea and islands, a backdrop for the scuttle of life on its slopes and down to the shore.

It looks benign, the perfect place for an afternoon stroll, perhaps even a villa or two.

We set off on a warm afternoon in late October to take a closer look.  Easy walk we’d been told and we didn’t even think to ask for directions … obvious wasn’t it?

It turned out it wasn’t.  There were some miles of confusion between road signs, satellite directions, steep suburbia, and strips of hotels.  By mid-day we’d managed to get ourselves out of the ‘park-and-jump-on-a-bus-point’ and found our way up towards the ‘park-and-walk’ point.

It had been a frustrating hour or so but nothing in comparison to what earlier tourists had faced to get to the top.   Johann Goethe in 1787, Joseph Turner in 1819, Charles Dickens in 1845 and Mark Twain in 1875 had all managed to peer into Vesuvius without the aid of Tarmac.

Our comfortable road hair-pinned us up towards the summit with thick bush and small trees to either side.  It felt ordinary and slightly scruffy, not as though we were scaling the back of the legendary Vesuvius, the most dangerous volcano on mainland Europe.

Vesuvius has erupted many times.  The one in 79AD that buried Pompeii is amongst the best known thanks to eye witness report of Pliny the Younger who watched as his uncle, Pliny the Elder, sailed fatefully towards the danger.

Less well known and still debated is information on the Avellino eruption thought to have occurred during the Bronze Age, around 1780BC.  Scientists have been working on evidence relating to this eruption for over two decades.  Here is a description from an article published in National Geographic in 2007:

” … in an event like Avellino, the conduit of the volcano is so tightly corked by solid rock that it takes an enormous amount of pressure building up from below, in the magma chamber, to blow a hole to the surface. When it does, the violence of the explosion—the boato, Italian for the enormous roar—propels liquid rock into the air so fast that it breaks the sound barrier, unleashing a sonic boom. During the Avellino eruption, the boato accompanied a blast that hurled nearly 100,000 tons a second of superheated rock, cinders, and ash into the stratosphere. It reached an altitude of about 22 miles (35 kilometers)—roughly three times the cruising altitude of commercial airliners.”

The last time Vesuvius erupted was in 1944.  In eruption terms it was grand but not that grand.

The experts believe that another extreme eruption is due and many are deeply worried about the lives and livelihoods velcroed on to the sides of the volcano.  Science is doing its best to keep tabs on Vesuvius but can’t guarantee that she’ll give much warning when she next bids for the headlines. 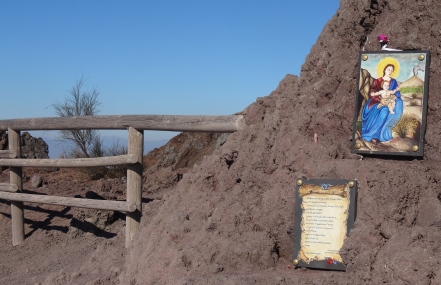 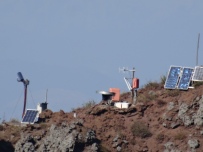 It’s all, even for the shoulder-shrugging optimist, a little unnerving.  It’s not hard to understand the need for the signs, some scientific, some religious, in fact it’s ridiculously reassuring to see them tacked, tiny and hopeful, to the side of the great crater.

In the meanwhile, as we wait for the odds to be revealed, three things are certain:  Naples will still creep towards Vesuvius; tourists will still climb its slopes; and artists will continue to be fascinated.

In 2005 ten international sculptors were commissioned to produce a piece each for the Parco Nationale dell Vesuvio. Here are my two favorite pieces from the ten sculptures in volcanic rock. 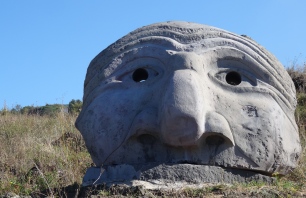 The following sources were amongst those used to research this article:

3 thoughts on “We thought it would be obvious …”

Looking across the Bay of Islands in New Zealand