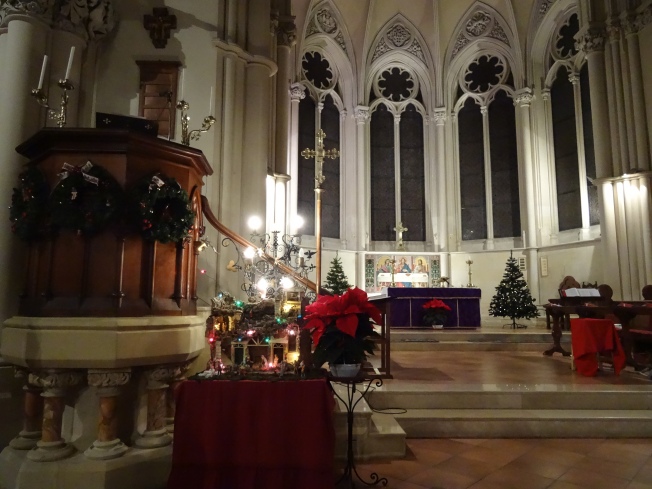 We could have been in England – the pure voice from the shadows behind us lifted the words into the church, floated them high above the candlelit pews and on towards the altar.

“Once in Royal David’s City …”

The 2014 Festival of Nine Lessons and Carols in the “inglesi” Christ Church in Naples, was beautiful.  It wasn’t grand but it had such threadbare, dexterous music, that we were knew we were linked in the truest way to the core part of the English church’s traditional celebration of Christmas.

Listening, and joining in with enthusiasm, was a cheerful mix of nationalities including Italian, German, American, and, of course, the English with a variety of Italian root systems.

Christ Church isn’t wealthy.  It’s surrounded by need, and its own English-speaking community has been washed to and fro by history, geography and politics … that’s what makes it extraordinary.  Here in Naples, bashed by earthquakes, volcanoes, disease, revolutions, and wars, this church has found a foothold and managed to matter enough to survive.

It was self-assured Victorians who laid the foundations.  For years, particularly in the early 19th century, they had pestered the Bourbons with requests to be allowed an Anglican church in Naples but the answer was emphatic … ‘no’.

Their chance for a church came in 1860 when Giuseppe Garibaldi, cheered on by the British, led his revolutionary and victorious army into the city.  This leader, new dictator in Naples, had hardly unlaced his boots before he faced a fresh front – an admiring posse of British ladies seeking permission to build a church.  It seems the ladies were well chosen for if there was any resistance from Garibaldi, it proved futile.

Today Garibaldi’s handwritten note granting the permission and the land for the building are proudly displayed at Christ Church.

In the five years following this gift the large, very ‘inglesi’ church, was built.  The design, Victorian-gothic, was by an Englishman and the materials were all imported from British territories.

Christ Church was officially consecrated by the Bishop of Gibraltar in 1865 and one hundred years later, in 1965, a plaque was placed on the outside wall to pay tribute once more to Garibaldi’s generosity.

In the almost-150-years since the church was founded it, and the once grand but increasingly impoverished city to which it belongs, have faced challenges and tragedies of every kind.  These include:

three major earthquakes – in 1883 it’s reported that 4,000 people lost their lives on the island of Ischia just off the Bay of Naples.  Amongst the dead was the young son of Canon Barff, chaplain at Christ Church.  In 1930 more than 1,400 people were killed in the Vulture earthquake near Avellino, 40kms east of Naples; and in 1980 the Irpinia earthquake, whose epicenter was 85km east of Naples, killed 2,914 people.

two world wars – Naples was bombed to shreds in the Second World War and many of its people left destitute (when Italy joined the war in 1940 Christ Church had to be closed until the arrival of the Allies in 1943);

disease –  amongst the most terrible were the two cholera epidemics of 1884 and 1910;

Outside the church this commemorates the death from a single brigand’s bullet of a young, English honeymoon couple 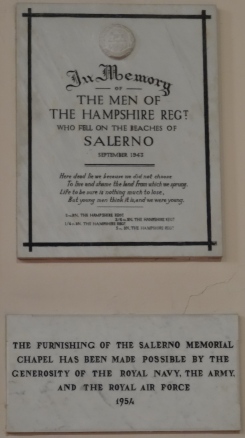 In the midst of this the churches of Naples have stood their ground, the best of them flexible and ingenious.   Christ Church, an extravagant building when it arrived, has learned with the rest.  It has moderated its size, clung on to its music, and continues to serve Naples and the English-speaking community however it can.

A new chaplain and his wife have just arrived, and in the great tradition of English churches everywhere, fund-raising for long-needed roof repairs are well under way.

If you would like to support this stoical, historic church which has done so much to support so many please use this link to their Facebook site.

A treat – the 2013 YouTube clip of two carols, including Once in Royal David’s City, sung by the renowned choir of King’s College Cambridge in England

(My thanks to Michael Rae for his excellent: “A short history of Christ Church Naples MDCCCLXV-MMX”)

Other sources have included:

BBC YouTube series of clips City of the Damned