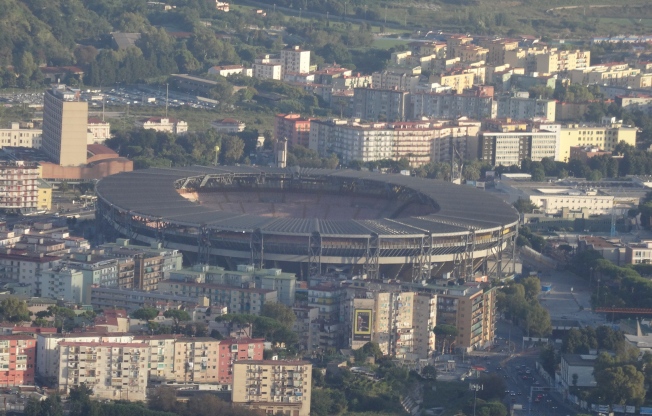 “Arsenal?” we stared at our son.

“Arsenal,” the son repeated with a grin.  What was he thinking?  Panic seized me – this was Napoli.

Luigi clattered saucers on to the counter.

Then Luigi turned his large back on us and hissed steam and froth into metal and ceramic.

We waited nervously.  My cappuccino was delivered last.  Luigi pointed at the large “N” written across the top of the milk.

“Forza Napoli!” we chorused, volume cranked up to meet the glower.  Then off, fast, to drill some local etiquette into our recently-arrived first born.

That evening all of us were on the sofa to watch Napoli face all-time rivals Juventus in Doha for the Italian Super Cup.  It was as if Luigi was there with us – we hardly dared leave the room.

The commentary was in Italian and the scoreline through large chunks of the match in Juventus‘ favour.  Napoli were always within inches but in the back of the net only once.

Then, suddenly, Gonzalo Higuaín, Napoli’s Argentinian-born striker, scored his second goal to bring his team level two minutes from the end.  Game on.

Penalty shoot out … we pulled the sofas closer … Napoli had to win for us, it was the least we could do for Luigi.

The Christmas tree blinked in the corner as Napoli’s Jorge Jorginho stepped forward to take the first shot but the gifted, brilliant goalkeeper Gianluigi Buffon, saved it.

Carlos Tevez, scourge of Napoli and scorer of both goals for Juventus, was the first to take a penalty for his team.  He hit the post …. he hit the post?  Tevez had crumbled and planted a splinter of impossible hope in all of us.

The next four penalties for each side, including Higuaín’s for Napoli, were perfect.  The goalkeepers didn’t stand a chance, not even the mighty Buffon.

We inched closer to the brink.  Now it was ‘sudden death’ – the first in a pair to lose would drop the cup for his team.

Occasionally the camera would swing into the crowd to catch the euphoria and the misery as each ball flew to its fate.  Children were wretched with agony, dignitaries collapsed on to cushions, the air was punched and grabbed and cursed … there were saves and misses and always the brilliant Buffon.  How could Napoli win?

With the scores again even it was Kalidou Koulibaly for Napoli who managed to send Buffon the wrong way and to somehow bounce his lucky ball off the post and into the back of the net.

It was almost too terrible to watch.  Now, once again, everything rested on a Juventus foot and on the reactions of Napoli’s Brazilian goal keeper Rafael Cabral, three inches shorter and a over a decade younger than Buffon.

The Juventus’ foot swung … for split seconds we could feel the sofa collapse, the cup start to slip and then … Rafael’s fluorescent green had reached the ball, had stopped the ball, had spun the ball wide.  Napoli had won!

Forza Napoli sempre!  Somebody caught the light fitting that nearly smashed to the floor in the excitement.

If you are passionate about football this YouTube clip has all the highlights.  If you’re not that passionate go straight to the end, I suggest around minute 12 and catch the last agonies.

A lonely ribbon on London’s skyline