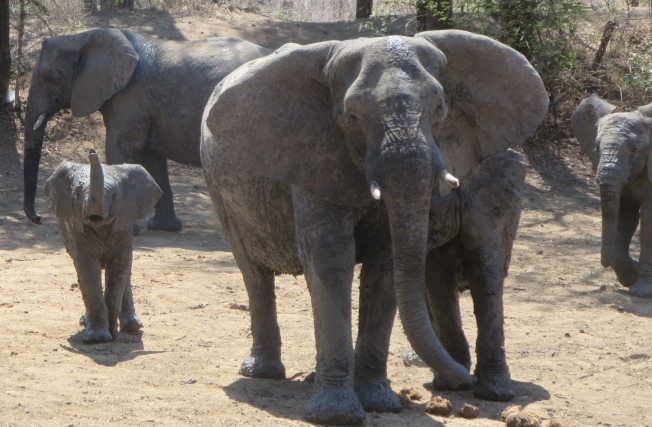 Elephants, the big-eared nomads of Africa, are in trouble. They are squeezed for space, many are slain for ivory, and others are sold into captivity.

Zimbabwe, in southern Africa, is blessed with large herds of elephants, some of the happiest on the continent … but there is danger, both from poaching and live export. The elephants are up for sale and buyers are waiting.

I wrote my first piece about the export of live young elephants from Zimbabwe to China in 2013. Today such sales continue. They are not illegal but nothing about the deals seems right.

Herds of wild elephants are targeted, assaulted, and separated.  The young are then captured, and taken to be held in enclosures for months. If they survive they are crated up ready to be transported to their new owners, wherever they may be. If they’re as far away as China hours of air travel lie ahead.

” … you represent to perfection everything that is threatened today with extinction in the name of progress …” (Words of Romain Gary in Dear Elephant, Sir)

Experts have spoken of the intelligence of elephants for years. They are social animals who learn from, and protect, each other.

“Studies of established herds have shown that young elephants stay within 15 feet of their mothers for nearly all of their first eight years of life, after which young females are socialized into the matriarchal network, while young males go off for a time into an all-male social group before coming back into the fold as mature adults.”
Charles Siebert (poet, journalist and essayist) “An Elephant Crackup?” in the New York Times(8.10.06)

Iain Douglas-Hamilton, a renowned expert on the African elephant and the first to study their behaviour in the wild, states:

“Elephants are intelligent animals which resemble us in some of their behaviour. They give an example of a society in which individuals behave with exceptional tolerance to their own kind, and even in times of distress and danger, hold fast to their family ties. As such they deserve respect in the same way that human life deserves respect.”
Among the Elephants, published in 1975

Maya, the matriarch of the Poetics herd, and her daughter greet Boone,
an elderly bull that spends most of his time east of the reserve. Samburu National Reserve, Kenya, 2007 from Earth to Sky, photographs by Michael Nichols (Aperture, 2013)
Copyright ©MichaelNichols, National Geographic

Research by many has shown that disruption to an elephant’s family group, particularly violent disruption, has complex consequences that ripple outwards, with individuals showing symptoms similar to post traumatic stress disorder (PTSD) in humans:

Why then, given the evidence, do we tear young elephants from their families and then condemn them to a lifetime of captivity?

“… we now find ourselves having to make an equally profound and, for many, even more difficult leap: that a fellow creature as ostensibly unlike us in every way as an elephant is as precisely and intricately woundable as we are …”
Charles Siebert (poet, journalist and essayist) “An Elephant Crackup?” in the New York Times(8.10.06) 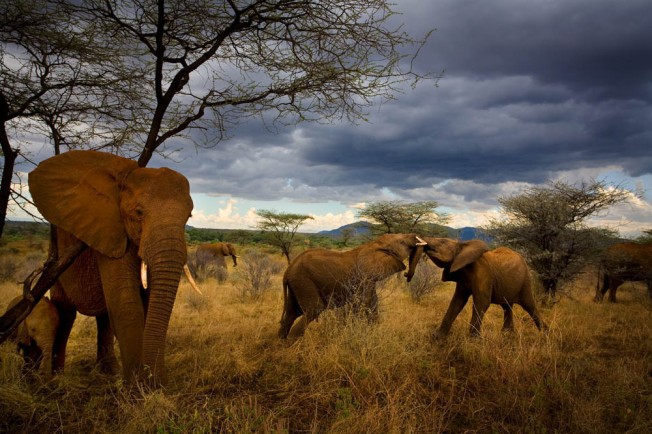 At the end of Among the Elephants Iain Douglas Hamilton hopes that Africa will understand the need to protect its wildlife:

“I believe that the people of Africa will, even though some sacrifice be involved, show the non-materialistic side of their nature by protecting their natural heritage, which is the richest in the world.”

In the main he is correct but certain African countries remain overwhelmed by poaching, and now bankrupt Zimbabwe forces its wild elephants through a loophole in the law, into captivity in foreign lands.

The distress caused to the elephants, particularly for those chosen for distant zoos and tourist parks, is undeniable and understood – surely we have a duty to protect all elephants from such trade? Unless we do so cruelty, such as that fuelled by Zimbabwe’s lack of funds and China’s appetite, looks set to continue.

Sources used for this article include the following:

Article in The Guardian on recent capture of elephants in Zimbabwe (October 2017)
An article in National Geographic illustrating the results of a recent, extensive survey of elephant numbers in Africa.
Aperture’s book:  Earth to Sky by Michael Nichols
Here are links to two of Charles Siebert’s articles about elephants, both are fascinating:
An Elephant Crackup? (New York Times Magazine)
Orphan Elephants (National Geographic)
The following will take you to a recent article on the accumulating evidence regarding the intelligence of elephants:
Elephants are even smarter than we realized (Scientific American)