Naples loves to have music – classical music, world music, new music, Neapolitan songs – music from palazzo to piazza, music that breaks your heart and throws you up to the sky all at once.

Take a stroll down Via Toledo any day of the week and the chances are that somebody somewhere will play you a tune and they’ll play it well. 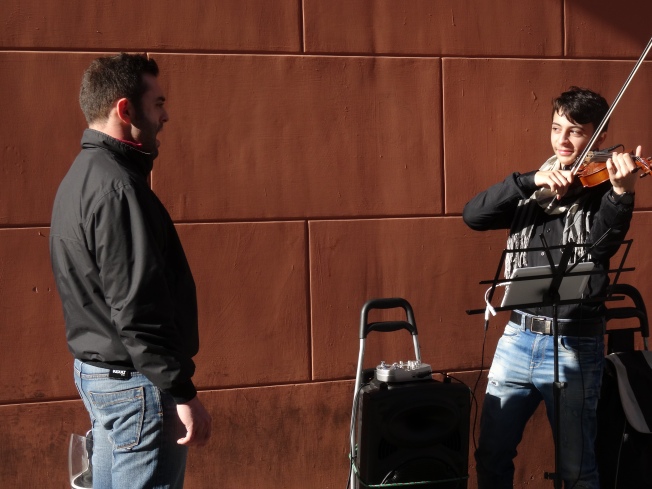 Young violinist is joined by a voice from the crowd, fresh from his scooter

Naples has one of the longest, non-exclusive, musical pedigrees in Europe.  It began over four centuries ago when the city first started to teach music as a trade, a life-skill, to some of its poorest children.

Key to the spread of talent in the city were the early ‘conservatori’.

The word ‘conservatorio‘ (as in music conservatory) is said to have come from Naples.  It means to ‘conserve’ or ‘save’ and was used first with reference to the city’s children and not its music.  Thesaurus now lists the original meaning of conservatorio as:  “hospital for foundlings in which musical education was given.”

The first conservatorio in Naples to get a reputation for its music teaching was Santa Maria di Loreto which opened  in  1537.  Within a little over a century its fame had attracted professional teachers and paying students.  In addition three other orphanages (conservatori) had opened with a similar focus.

It was a good time for music.  In 17th and 18th century Europe the churches and courts were on the hunt for trained musicians, and across society it was well known that strong musical skills could mean a high-flying career.

Here Naples had an advantage.  In the 17th century it was amongst the cities of choice for a wide range of aristocrats.  In 1606 there were 27 princes in the Kingdom of Naples and by 1640 there were 67 – quite a crowd – and nearly all keen to have some fine musicians of their own.

The most sought after talent of all was that of the castrati – highly-trained male singers who had been castrated before puberty, and whose voices could cover much of the same range as a woman’s but with more strength.  At one of the Naple’s conservatori, the Conservatory of Sant’Onofrio a Porta Capuana, a fifth of the pupils were castrati. 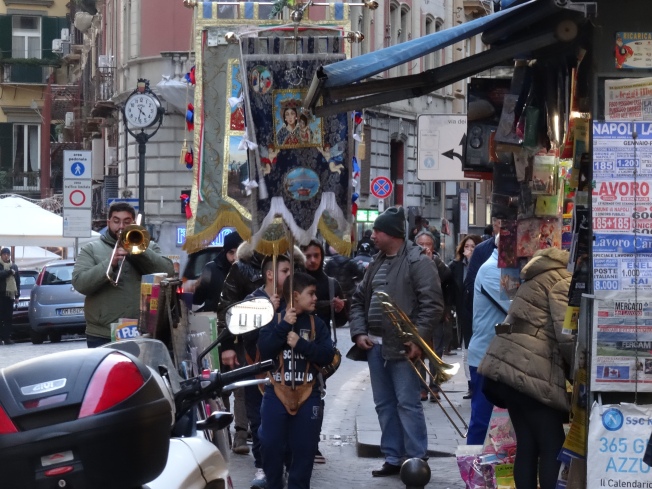 Raising money for the ‘pescatori di Mergellina’ in Naples

Then came change.  In the late 18th and early 19th centuries the Napoleonic Wars stirred across Europe and many old ways were lost.

By 1807 in Naples only one of the musical conservatori survived – the Pieta dei Turchini.  This, which had already absorbed some of the children from the other conservatori, was moved to the Monastero delle Dame Monache di San Sebastiano.

Then in 1826, a little over two decades later, Francesco I, King of the Two Sicilies, ordered that the conservatorio be moved to the monastery San Pietro a Majella. 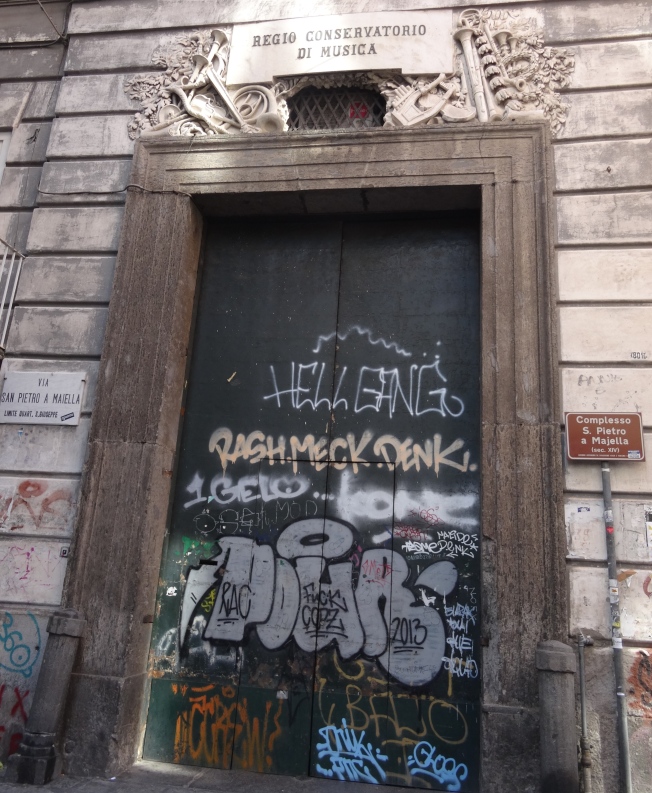 This is where it stands today – the Regio Conservatorio di Musica in Via San Pietro a Maiella.  You might not notice it set back into the dark wall of its narrow street – but if you’re lucky you’ll hear it – still making music.

Today it may not have quite the same standing across Europe as it once did have but it has survived almost everything – waves of rulers; sudden administrative changes; disease; plagues; volcanic eruptions; earthquakes; and bombings.

In the mid-19th century a German visitor to the conservatorio,  Von Wasielewski, printed his thoughts in the Berlin Echo. They were reproduced in American Journal of June 8, 1867.  His conclusion:

“Neapolitans have no little reason for being, to a certain extent, proud of this Conservatory; for not only is it the oldest of its kind in Europe, but many celebrated artists, including some masters of the first rank, received their professional education there.”

To me, in Naples without a prince in sight, it seems that these artists and masters, many of them once the city’s children, have made their city proud and sown a love of music Neapolitans have never forgotten.

These gentlemen were between a jazz band and a violinist on Via Toledo – they stole the show. 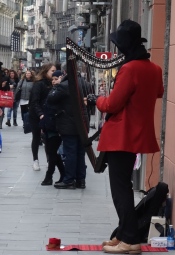 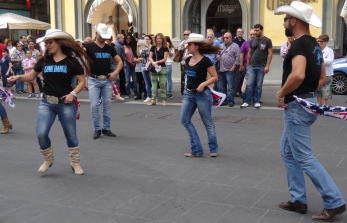 The sweet sadness of the saxophone – Naples 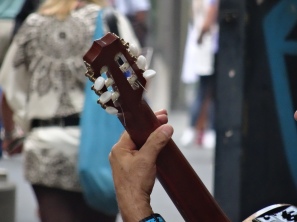 The Teatro di San Carlo, the oldest opera house in Europe, is the well-known jewel in this legacy but even it may not have survived without the city’s passion for song.

Today you’re not likely to walk far down the streets of Naples without bumping into a tune in one form or another.  And they’re not just for show – they matter.

The recent funeral of Pino Daniele showed just how much they matter.   Pino, a Neapolitan guitarist, and singer/songwriter, began as a busker in Naples.  When he died early this year the city was heartbroken.  A day of mourning was declared and flags were flown at half-mast. Thousands crowded the Piazza del Plebescito to say good-bye to ‘Pino’ who had sung for them and about them, and meant everything to them … another son of Naples made famous through music.

There are some links given in the piece but here are further links to some of the sources I used to research this:

On the trail of the missing music conservatories by Jeff Matthews

The website of the Conservatorio di Musica San Pietro a Majella

Music in Seventeenth-Century Naples:  Francesco Provenzale (1624 – 1704) by Dinko Fabris published by Ashgate Publishing (page 51 has the amazing statistic about the number of princes in the Kingdom of Naples)

One thought on “Naples loves music”