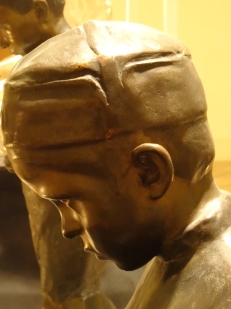 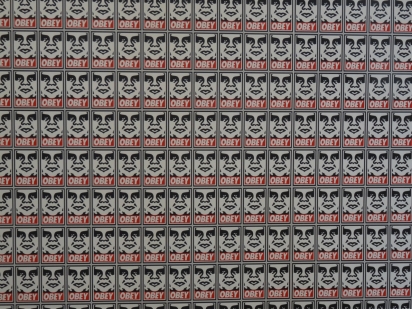 Andre the Giant by Shepard Fairey

I’ve been to two art exhibitions recently in Naples – one on sculpture  and the other on street art.

The first, ‘il Bello o il Vero’, is on ‘Neapolitan sculpture from the late 18th and the early 19th century’,  and is in an old monastery complex.

Just reading that now makes my brain go foggy.  If it’s happening to you – resist!  The show is ‘bellisima‘.

I’ve been twice and would quite happily go again.

I could see right inside the characters on display and wouldn’t have been surprised if they’d all started chatting to each other.

I stepped into rooms full of strangers from a different age and I got to know each of them without saying a word, without even having to remember their names.

Francesco Jerace’s busts of the wealthy steal virtually one whole room of the show, while other sculptors from the same period fill other halls with a crowd of moods and social classes.

There are rows and rows of displays but also enough light and space to meet each individually.  Some have come from public galleries and others from private collections but it’s the first time they’ve all been together. 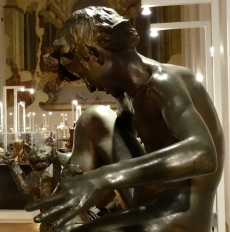 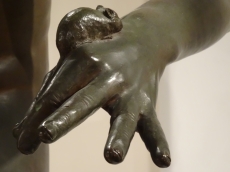 I know it was the best few hours I’ve ever spent in any exhibition and that was without even trying to use the digital information system I could have picked up on my iPhone.

As well as the sculptures another big attraction of the show is that the building hosting it is the church and former monastery complex of San Domenico Maggiore near the historic centre of Naples.

The big church is crammed with impressive chapels and the remnants of royal patronage, whilst the monastery complex beside it, where the exhibition is held, is full of light whitewashed space and stone.

Saint Thomas Aquinas  used to teach there when the buildings housed the Naples’ University of Theology, and the door to the revered teacher’s old room is tucked behind the displays. 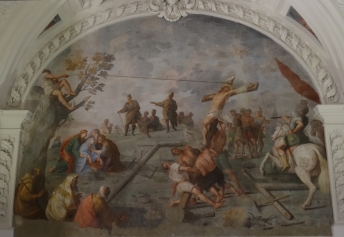 The whole exhibition can hardly be more traditional or welcoming.  Information is everywhere and certainly on our visit photography was encouraged.

#OBEY, on the other hand, has its own approach.

This show, on the work of  the 21st century American street artist Shepard Fairey, is in a different part of town – the upmarket Chiaia area of Naples – and photography is banned.

It’s hosted by a former palazzo, once the grand home of a grand family, and now the Palazzo delle Arti Napoli (PAN).   The plain interior is spacious but unfinished, and the entrance a fitting hashtag of scaffolding.

We had a guided tour which was excellent and which made sure we got each subversive point.

We started with the true meaning of #OBEY, a word not there to make you obedient but rather to challenge you to at least ‘think’.

That understood we then began with Shepard Fairey’s original street art of Andre the Giant, and finished with his famous, blue and red, mixed media portrait of Barack Obama.

In between we saw giant US dollar bills with an anti-consumerism makeover; posters that gave war a kicking; and elaborate framed designs featuring Fairey’s friends, the gang who watched his back in the street art days.

The unwritten message that gets consistent wall-space is the power of the poster, the impact of the disposable, printable image.

It’s strange to see a street art celebrity tidied up in an exhibition, and tied to a president, but it does prove two things:  a) who is influencing who and b) the savvy of Obama.

And, like ‘il Bello o il Vero’, it fits so well with Naples, a city still with shades of blue-blood but now so ‘in-its-own-skin’ that you’d never guess.

As for street art … well, Naples has never been shy. 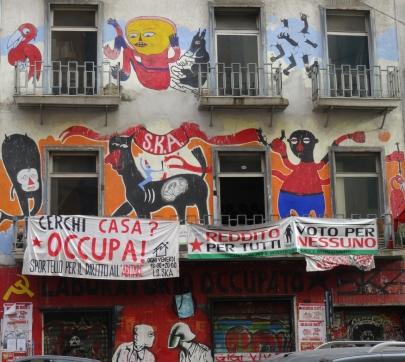 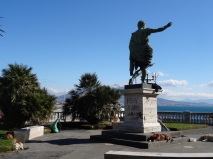 Below are two links with further information on Jerace and Shepard Fairey:

2 thoughts on “Art in Naples: Jerace and others; Shepard Fairey and #OBEY”