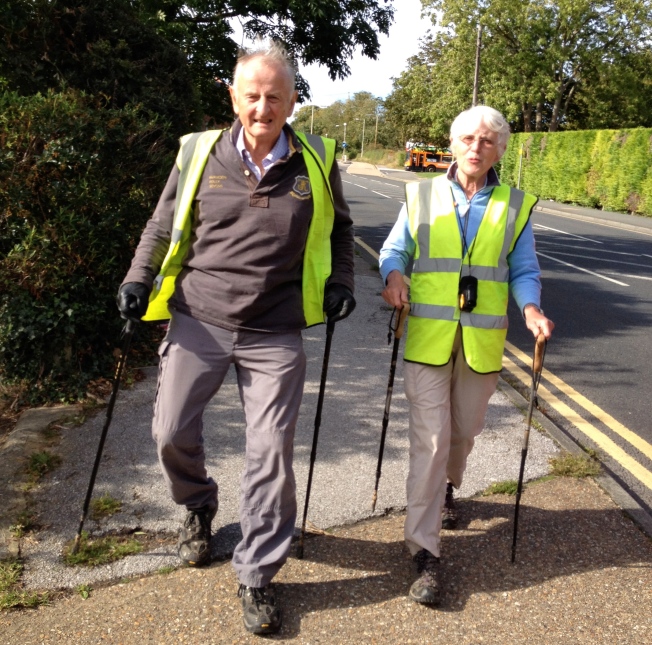 Help! He’s at it again – Tom Benyon OBE, a man in his prime, is about to set off on another charity walk.

The route, programmed to take less than a month, is Holyhead to Oxford – just under 280 miles.

The purpose of the walk is to raise money for ZANE (Zimbabwe a National Emergency).  Tom’s three previous walks, totalling 1,136 miles, have raised £840,000, roughly £739 per mile.

This time it’s not the days; it’s not the miles; it’s not the toenails that matter – it’s the million.  Tom’s already calculated that if he can raise £800 per mile his walks will have succeeded in raising a million for ZANE.

Taking the Shylock view we can be sure, as donors, that every mile will exact its toll. Tom is 70 which means he’ll have to put in more or less double the effort required from a man half his age.  In an alarming article on aging the Mail Online provides the following statistic:

Gravity; jammed joints; splintered toenails; and standard levels of disillusionment (not to mention the lungs) might have done Tom in by now.  Not a chance.  He’s out and about urging startled audiences to join him.

Who are these audiences?  Some of them are Zimbabwean and still trying to come to terms with the fact that it’s their communities this irrepressible Englishman is giving his feet for.

The last audience heard him speak at St Michael’s Church, in Chester Square in London.  It was midday in the  middle of the week in May. Holyhead and a 280 mile walk starting four weeks further down the line seemed a safe distance away.  It clearly isn’t.

Most of us, knowing this and having read the Daily Mail article, will be in need of a lie down.  Not Tom.  He’s warming up for his walk.  Probably not by doing useful stretches and the like but certainly by fine-tuning his donors.

Even as we lie in our darkened rooms summoning up the energy to turn on the kettle an envelope will flump through the letterbox.

Have we heard how ZANE’s work is transforming the lives of Zimbabwe’s pensioners left bereft and penniless by hyperinflation?

Do we know that ZANE has now partnered with Homes in Zimbabwe and is supporting the old age residences there?

Have we seen the miraculous work of the club foot programme?

It doesn’t take much more than a glance to recognise how effective ZANE’s work is.  This small charity, with no fancy buildings or fleets of vehicles, finds lives in heartbreaking circumstances and gives them a lift.

The reason many of us have heard about ZANE at all is either because we know someone who the charity has reached or because of Tom Benyon.

So, if you’ve got a minute and some money to help Tom reach his million please click on this link.  If you feel like a little exercise pick a spot on the route between Holyhead and Oxford, let them know you’re coming, and join the walk for ZANE.