A few weeks ago we were treated to a concert there.  First we had to find the theatre.

Pinpointing the teatro on the map was easy – spotting the entrance was more complicated.

The reason?  Naples has bandaged its opera house so tightly in scaffolding that it’s almost completely hidden. The only giveaway is the large red and gold billboard above the balaclava-style hole of an entrance to the opera’s cafe, Scaturchio.

Scaturchio – cappuccino in the opera café

The cafe, with yellow sofas and screens showing orchestras in rehearsal, is the curtain raiser for the teatro itself but it was a couple of cappuccini before we were sure of the connection, and another five minutes before we found the tiny ticket office.

Here two weary staff fielded questions about seating and tickets and options … all in Italian.

We tried what we thought were the right words and then agreed that ‘online’ would be best.

Two nights later we found our way back to Scaturchio’s then followed the well-dressed, Italian, February-crowd around another corner, up the curving marble stairs and into the plush of the Teatro di San Carlo.

Our box was halfway up the layers, Palco IV, and near the centre.  We were shown to our seats by a young lady with long, chestnut curls, dressed in elegant blue who unlocked our door and ushered us in. 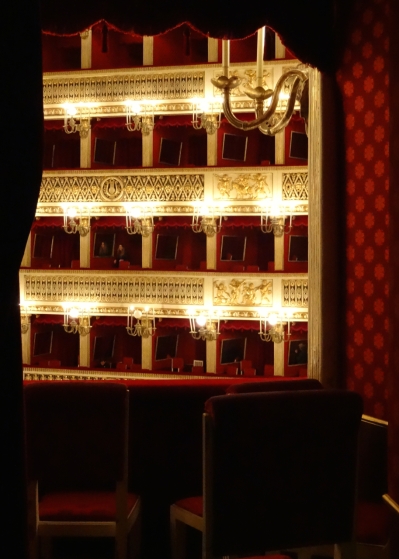 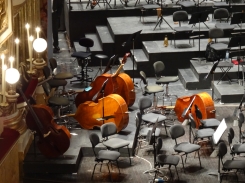 Suddenly we were beneath the painted ceiling surrounded by pockets of padded balconies and golden nymphs with the huge (17m long and 12m high) main curtain in front of us pulled back above the waiting cellos and music stands.

The crown above the Royal Box – Teatro di San Carlo

Our box was right next to the Royal Box which looked empty apart from a camera crew.  Clearly the force behind the original 1737 teatro, Charles VII, first Bourbon ruler of Naples, was not in.

He’d gone for the best, built a jewel, and it’s still here however threadbare the city’s pockets.

What we saw was stunning but not quite original.  In 1816, when the theatre was just short of eighty, it was nearly destroyed by fire but then rebuilt in less than a year with almost more dazzle than before.

There have been a few facelifts since the fire but nothing major.  The most recent upgrade and repaint was in 2010 which means right now is a great time to feel the full gleam of royal bling.

We were treated to Mahler’s Third Symphony the night we took our seats in the San Carlo.

It was an evening of music and mirrors, of light and luxury – of opulence in old Naples.

Here is a clip from a performance at the Teatro di San Carlo in early March by violinist David Garrett.

6 thoughts on “Concert at the Teatro di San Carlo in Naples, Italy”