San Gennaro, patron saint of Naples, being positioned for the Pope’s visit

Popes do visit Naples but not often and usually their presence is connected with some disaster in the city.

This time Pope Francis has chosen to spend a day here and he’ll include one of Naples’ most troubled suburbs – Scampia.

I was in Naples today with less than 24hours until the Pope’s arrival.

I’m not a Catholic and I’ve never met a pope, but I’m impressed that this one is going to one of the places where Italy hurts most, to its third largest city: volcanic, often shaken; coping with one of the world’s busiest ports; and managing a constant influx of immigrants washed ashore from Africa. 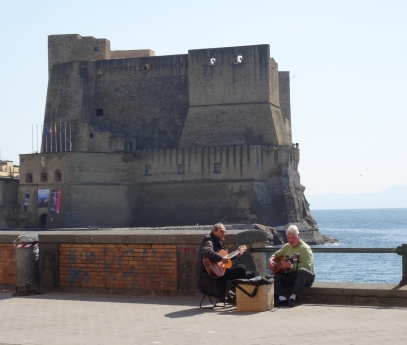 Ready for the visitors to Naples

Ready for visitors to Naples

Visitors in Naples for the Pope

It’s a part of Italy that many tend not to bother with but tomorrow Pope Francis, dressed I assume in very visible white, will step inside one of the most difficult scabs in lovely Naples, the Poggioreale Prison, where he’ll have lunch with inmates.

I asked a young Italian if she thought the visit was important.

“Si,” she said but without the fervour I’d expected.

She explained that the Pope did live in the neighborhood, and that she could visit him on any Sunday in Rome if she chose.

Would she try to see him?  Here she hesitated.  The thought of being one of millions in the narrow streets of Naples had no appeal.

“We’re not Rome.  We don’t have big wide avenues.” 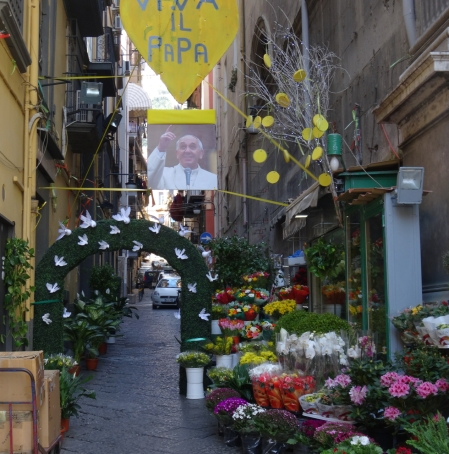 A flower seller welcomes the Pope in Naples

Photo shoot in Naples at the time of the eclipse

Taking the sun with dogs in Naples

The solar eclipse through dark glass in Naples

Getting on with getting on in Naple

I re-adjusted my excited view as I walked back across the city.

Naples was going about its business.  The day was stunning – the perfect curtain raiser for a big occasion.

As I walked the Lungomare along the seafront I could hear a mix of languages.  Hundreds rather than thousands but there were definitely visitors in town.

In places scaffolding that’s wrapped the city for months was being removed.  Even the bandaged opera house, Teatro di San Carlo, was unwrapped a little to allow it a peek at what was going on across the road in the Piazza di Plebiscito.

Piazza di Plebiscito and its neighbours

I thought a little harder about the visit.  Not only did Naples have to face the threat of Islamic extremists but many of its own citizens would be in an awkward position ahead of this visit.

This particular pope is not shy of speaking out against organised crime and Naples has more than its fair share of complications in this area.

Perhaps this is why the chatty city seems to have gone a little quiet – this visit is from a pope who won’t look the other way.

Difficult perhaps but there are some easy wins: the potholes have vanished (on the Pope’s route anyway); and Poggioreale Prison has probably been given the scrub of its life.

Naples waits for the Pope

Naples waits for the Pope

One thought on “2015: Pope Francis to spend whole day in Naples, Italy”