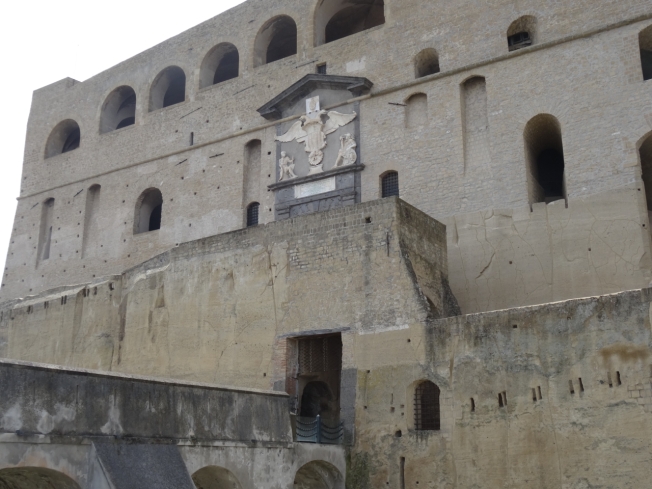 The Castel Sant’Elmo Naples, Italy with coat of arms of Charles V and the double-headed eagle

Bump into Castel Sant’Elmo, with Vesuvius just there, and you realise that you probably have no idea what ‘trouble’ even is.

When we visited there was trouble. 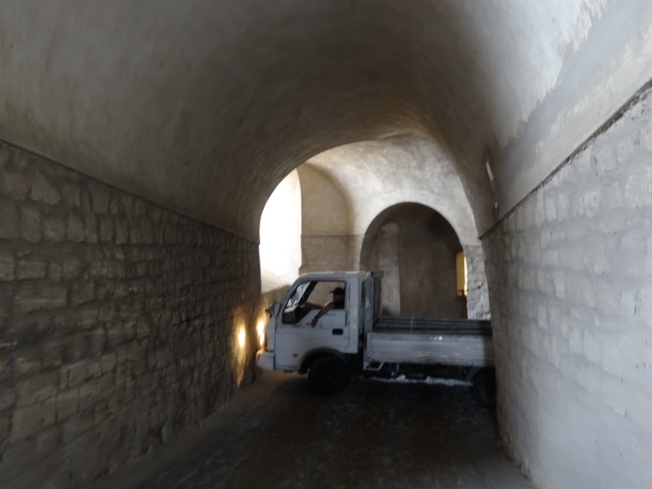 Only minor trouble but it came with the grinding smell of over-heated engine oil.  The invader this time was a small white lorry that eventually scraped a turn where there should have been none.

For us it was a lesson in underestimation – never misjudge the determination of the Neapolitan who feels he might be denied access. Don Pedro di Toledo did not.

His task, as viceroy of Naples from 1532 to 1553, was to bring order and progress to the city on behalf of the Holy Roman Emperor, Charles V.  He had a lot to do – the city was abused, disorganised and plague-prone, and it also faced continual threats from the French, the Turks and from local rivals, including belligerent barons.

Don Pedro decided to take a look at the city’s defences, amongst them Belforte, the castle founded by Robert of Anjou in 1329.  The location was fine but Don Pedro wanted a rebuild.  Work started in 1537 and took nine years to complete.  When finished its ‘I’m-in-town-for-good’ message was clear. 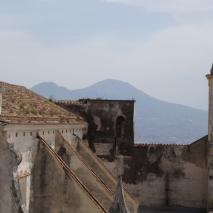 The fortress, now known as Castel Sant’Elmo, has massive walls of pale ‘yellow Neapolitan tuff’, and sits at the top of the city on constant look out, carved from the ground that it’s been built to hold.

You might think that solid equals ugly but somehow it doesn’t.  Visit the top of the castle and it’s like freeing a bird – you are at the highest point for miles with views in all directions.

To one side there is Vesuvius and Capri, then the scene sweeps round over the Bay to where Capo Miseno, and the islands of Procida and Ischia fade against the distance.  From that view turn in either direction and i mille colori, the thousand colours, of the city patchwork up against the volcanic hills behind.

I mille colore di Napoli – the thousands colours of Naples (from Castel Sant’Elmo) – to the far right Capo Miseno, Procida and Ischia

Since Don Pedro’s day the castle has buttressed its way through most events, only flinching at a lightning strike in 1587 which hit its ammunition supplies.  The huge explosion killed a 150 and plummeted debris on to the city below … but by 1610 repairs had been completed.

“To the martyrs of the Parthenopean Republic, who on 21 January 1799, declared a Napoletan Republic from this place …

Then, just under 200 years later, there was a different kind of trouble at Castel Sant’Elmo – political trouble commemorated by a plaque on the wall of the castle about a hundred metres down the hill from the visitors’ entrance.

Like a dark stain it remembers those who died for the ‘Parthenopean Republic’ in 1799, amongst them a number of local intellectuals and professionals who supported the republican ideals that the French had brought south through Italy with their army – ideals that had sent the royal family of Naples rushing across the sea to Sicily.

The new republican order did not last long.

Passageway between outer walls of Castel Sant’Elmo in Naples, Italy

Within six months of the declaration, faced by increasing violence, supporters of the republic were forced to seek sanctuary in the city’s fortresses including Castel Sant’Elmo.  There, after intense negotiations, they took what looked like a fair deal – safe passage to France.  They were escorted on to waiting ships …

Then?  It seems that King Ferdinand’s wife, Maria Carolina – daughter of the Empress of Austria, and sister to Marie Antoinette who had been beheaded in France – did not take kindly to republicans.  One point of view is that she, assisted by the persuasive talents of her great friend Emma Hamilton (who was wife of the British Ambassador in Naples and keen ‘friend’ of Nelson) may have persuaded her King and the British naval commander, to stop the ships sailing and to find the local ringleaders.

Terrible consequences followed – the gallows and firing squads ended the lives of some of the city’s finest intellectuals, whilst the courts sent others into prison or exile.  The stiff dark lettering on the implacable walls of Castel Sant’ Elmo are a reminder of that time. 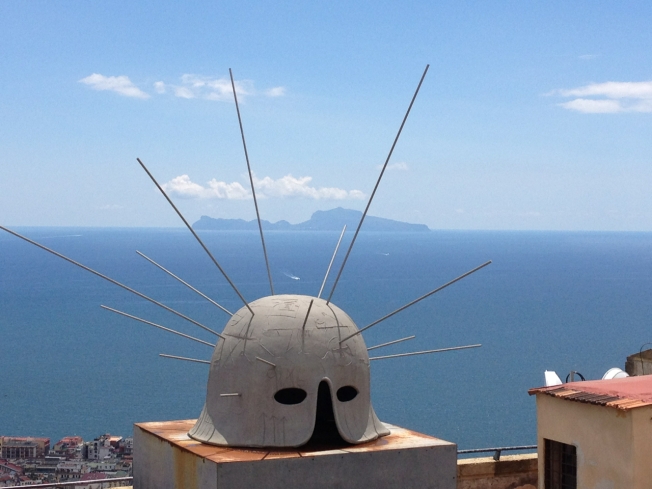 Mimmo Paladino’s sculpture at Castel Sant’Elmo with Capri behind

1799, from whichever way you look at it, was a murderous year in the history of Naples … but it was by no means the only one, and the strength of the castle walls suggest that Don Pedro di Toledo was never in any doubt that the city would attract trouble for many years to come.

View to Capri from Castel Sant’Elmo

Today his castle still stands and it has taken on many roles since it was built – fortress, prison, sanctuary, and now tourist attraction and art gallery.  It is bulky and unmissable … a memorial to man’s madness set high above the Bay of Naples.

Time and the Castel Sant’Elmo, Naples 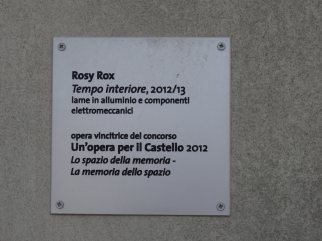 Time and the Castel Sant’Elmo, Naples

Here are some of the sources I used to research this article:

For God and Glory: Lord Nelson and his Way of War (by Joel S A Hayward)

The Reign of Charles V (by William S Maltby)

Too Great a Lady: The Notorious, Glorious Life of Emma, Lady Hamilton (by Amanda Elyot)

Article in the New York Times on Gothic Locations in Naples

Article on the Kingdom of Naples by the Encyclopedia Britannica

(There were many others …)

A lonely ribbon on London’s skyline