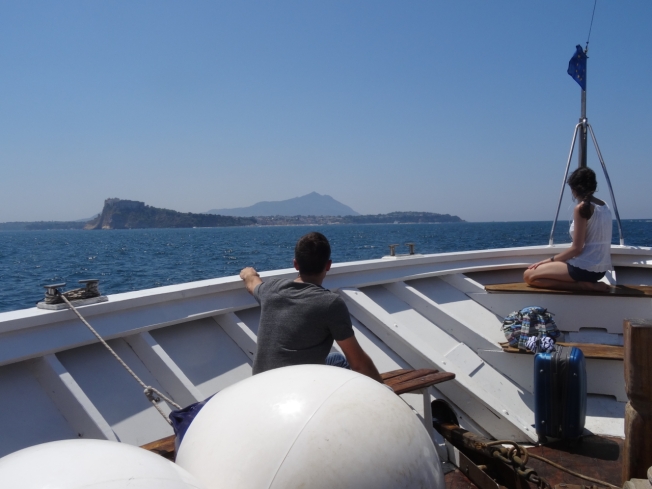 Ferry to Ischia with Procida in the foreground

Islands are impossible to resist.   Sit for just one pizza on the seafront in the Bay of Naples and you’ll feel the pull. Capri is the big magnet but swing your eyes to the other side, away from the Sorrentine Peninsular to the opposite end of the bay, and you see Ischia with little Procida tucked between it and the mainland.

Our trip was to Ischia by ferry – a brief journey to join an afternoon sail. 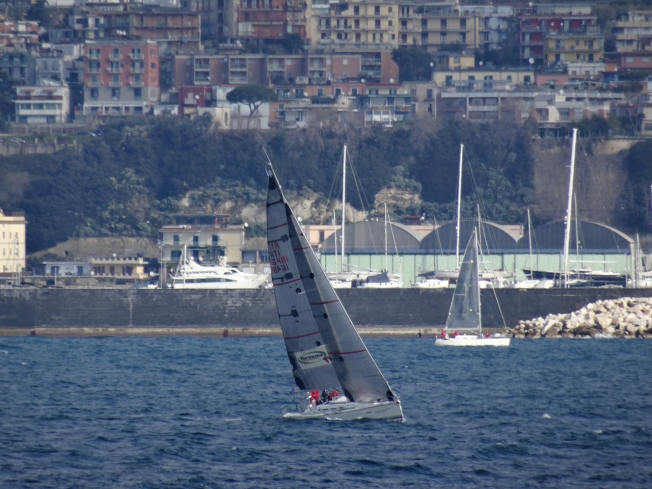 Pozzuoli in the background – the place to be was at sea.

We left from a shadeless harbour in Pozzuoli with help from the website procidabiz. It was a 40º weekend in the first of two July heat waves.  The mid-morning sun wilted shadows and curled the skin.  The only place to be was at sea.

The small passenger ferry did not waste time.  It accelerated into the spray and pushed back the heat as it laid out Pozzuoli harbour behind us.  Over the stern we could see its mix of old stone, new builds and the constant judder of port traffic.  We could feel, even from a distance, the flex and strain as it carried trade in from the sea then shouldered it up the hill behind – a flow that’s been going on for centuries.

Pozzuoli harbour – without cloud the day we left

It looked busy the day we sailed but it would hardly have registered on its ancient scale of activity.  For the two centuries before Christ, the Roman republic used Puteoli (its name then) as its main port.  The harbour received grain shipped in from Egypt and then sent it on to hungry Rome, the first city ever to feed over a million residents.

Today, look back at Pozzuoli from the sea, and its hard to spot signs of Roman grandness partly because some is now underwater thanks to bradyseism – the sudden, sporadic shift in the earth’s surface that sinks or raises secrets according to its direction.

Mixed building techniques in part of a harbour wall in Pozzuoli

The Roman structures might be hard to find but it’s worth looking as their survival two thousand years on, despite the saltwater, is remarkable. 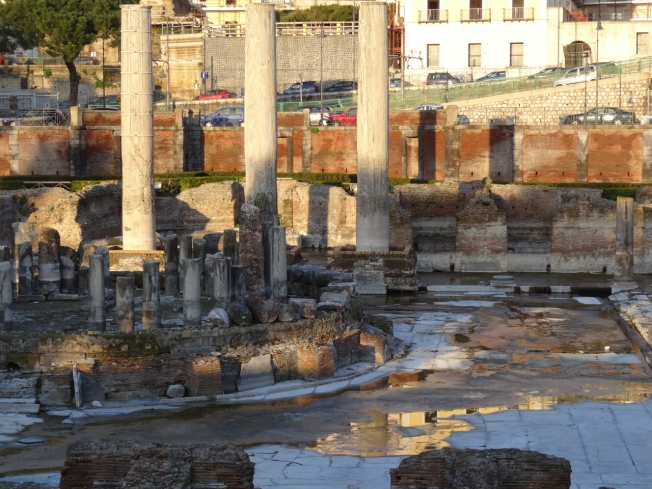 ‘The Temple of Serapis’ now known to be a Roman market place in Pozzuoli. The watermarks on the three tall pillars show the effects of bradyseism over the centuries

The reason for their survival at all in such a physically unstable area is one of the by-products of that instability – volcanic ash – ‘pozzolan‘.  The local Romans mixed this into their concrete and when they understood the results they took them north to help build Rome.

I couldn’t see any of the sunken past as our boat sped out towards Ischia but I knew there was a world of resorts and villas in the water around us – a reminder that Nature did not spare the wealthy. 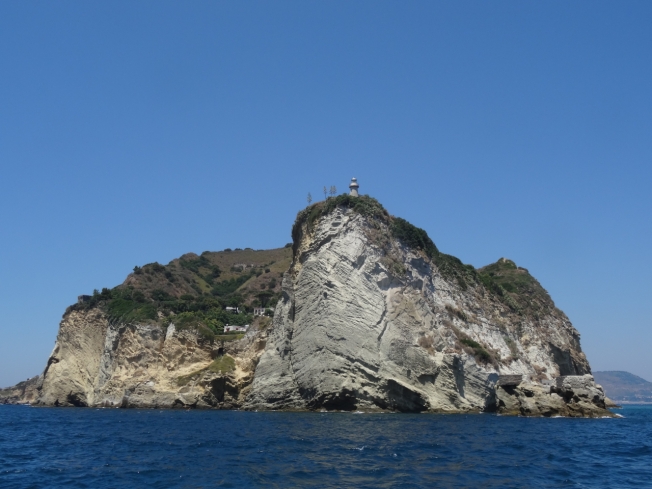 View of Capo Miseno as we headed out to Ischia

At the edge of the bay we reached the gatepost of Capo Miseno – an ancient full-stop.  It was from here that Pliny the Elder watched Vesuvius erupt in 79 AD, and it was in the shadow of its point that Agrippa nurtured Rome’s young navy following the Battle of Actium in 31 BC.

Heading home – Capo Miseno with Vesuvius in the background

The cliffs of Capo Miseno are a pale yellow with caves that dip into the sea.  It’s  named for the trumpet-player Misenus, murdered in Virgil’s Aeneid by Triton, who hurled the young musician into the waves when he dared challenge the gods to a music contest.

The pastel colours of Procida

We bounced past, cool in the wind, headed for the pastel-coloured harbour of Procida, then on beyond to its bigger neighbour, the volcanic Ischia, five times larger than Capri. 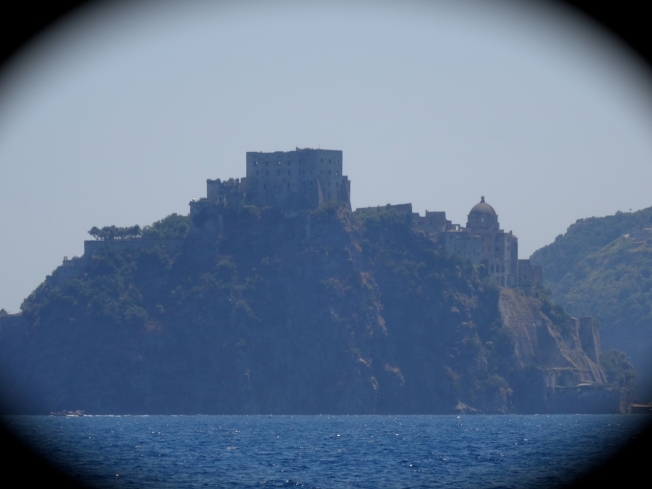 The Aragonese Castle at Ischia

First impression from the water is that Ischia is a stern place with its Aragonese castle and steep wooded sides.  Then, a little further around the bay, it becomes clear that there is a softer side much loved by tourists.

Ischia and its newer, softer side

We were not there long enough to explore but if any island should be forgiven for looking even a touch grim it’s Ischia.

For a start it is volcanic, seismic and has been shifting for centuries. The last actual eruption was in 1302, but there have also been frequent damaging earthquakes.  A relatively recent and significant earthquake was that of 1883 which destroyed the towns of Casamicciola Terme and Lacco Ameno.

On top of this instability, and as if battling geography isn’t enough, the island has also had to deal with a fractious history.

The Greeks are thought to have been the first to arrive in around 770 BC followed by every other passing ‘would-be’ power.  The list of battles, snatched ownerships, resulting chaos and disease, is long and exhausting but possibly the deepest, most humiliating scar has been left by Rome’s first emperor, Augustus, who swapped Ischia (46.3 km²) for tiny, then Neapolitan-owned Capri (10.4 km²).

Entrance to the ferry port on Ischia

Today, historically, the island is quiet.  Since the unification of Italy over 150 years ago Ischia has been part of Campania and the only waves of invaders have been film enthusiasts and tourists, amongst them many Germans who come to enjoy the island’s famed thermal springs.

On our afternoon we sailed along one side of the island and then anchored to swim in the sea off its sharp edges.

Sailing past the steep sides of Ischia

It was only a glimpse of Ischia, a brief stop and then back to the port full of taxis with their tourists waiting for a ride home.

The ferry for Pozzuoli was the smallest with the biggest queue.  It was also the last ferry home on a hot Sunday evening.

Our queue’s sweaty egos might have boiled over but they didn’t thanks to the genius display of good-humoured muscle from our boatman.   He loaded us in waves and then shipped us, low in the water, back across the Tyrrhenian Sea towards the Bay of Naples.

Boats in harbour on the Tyrrhenian Sea

One thought on “Ferry trip from Pozzuoli to Ischia and back”