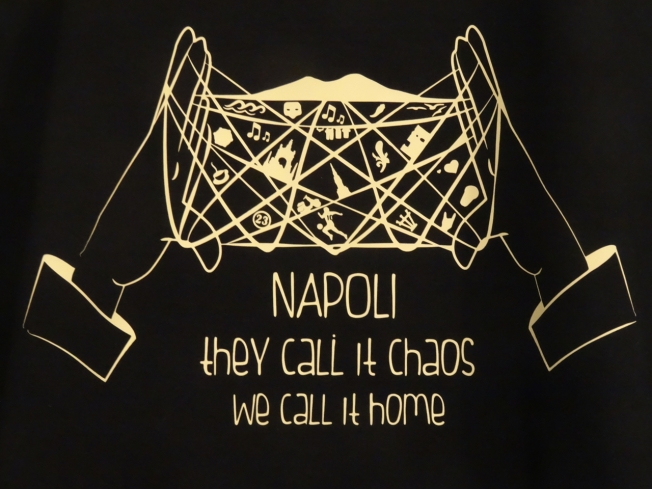 In the summer of 2014 we arrived in our new home on the outskirts of Naples.  We left this autumn.  Two years in total, two years in which we were privileged to see places many Neapolitans themselves never get the chance to visit.  Some of the sights we saw were outside the city but many were squeezed into its narrow streets.

This post, mainly of photographs, is a glance at the context, at some of the neighbourhoods and corners, that frame a few of those places that were in Naples itself.

One side of the vast city of Naples

Seen from above Naples is a jigsaw held between volcanic lands and blue sea.  It’s a mix of the ancient and the new, and its life is neither easy nor still. 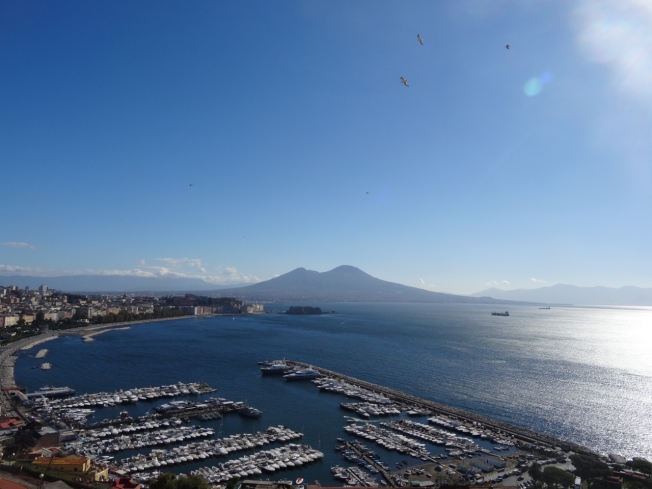 Views of the Bay of Naples and its city are held in a cup, guarded along its rim by Vesuvio, Capri, Ischia, Capo Miseno and the Campi Flegrei.  On clear days the sun bounces in silver off its Tyrhennian Sea.

Tambourine in the Via San Gregorio Armeno

In the centro storico – the old core of dark, narrow, high-sided streets – the city sits unshifted, guardian of its artists and its artisans …

… of its saints and traditions …

A fashion shoot outside the main post office in Naples, Italy

On every corner, whatever its era, it lives …

A side street in Naples, Italy

… there is the every day.

The shoe cleaner on Via Toledo

When employment fails entrepreneurs step in – some are professional and experienced …

Pulcinella by the Castel dell’Ovo in Naples, Italy

… others are seasonal and hopeful. 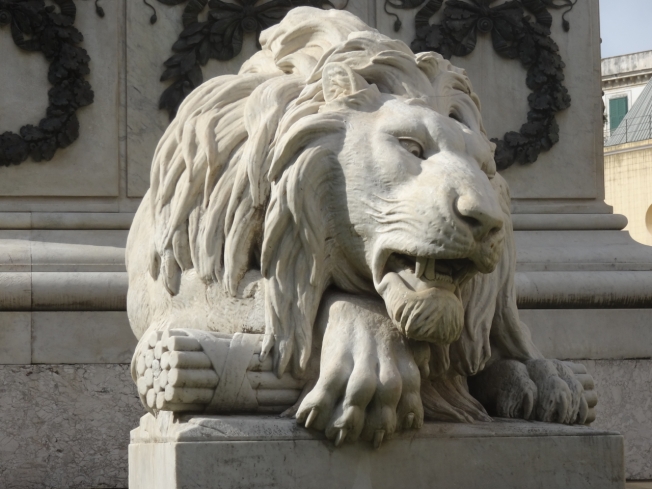 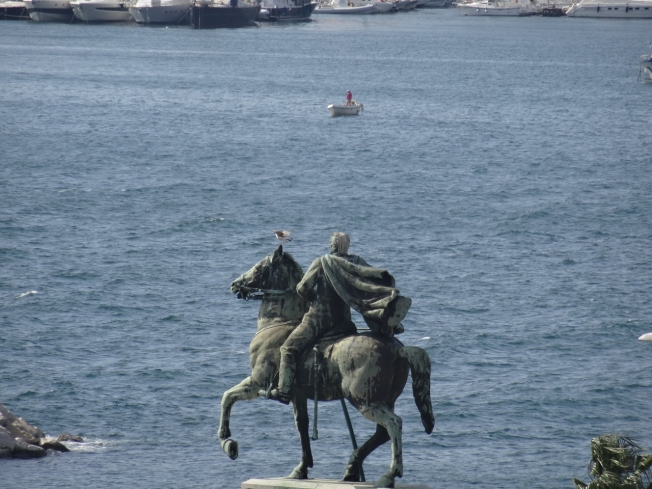 Statue of Armando Vittorio Diaz, the Italian General born close to Naples who signed the Armistice for Italy at the end of the First World War.

Some take the best seats in the city.

Character and personality fill every inch of Naples, each connected to the next, merged but separate.

There is wealthy Chiaia.

There are the close-packed streets of the Quatieri Spagnoli. 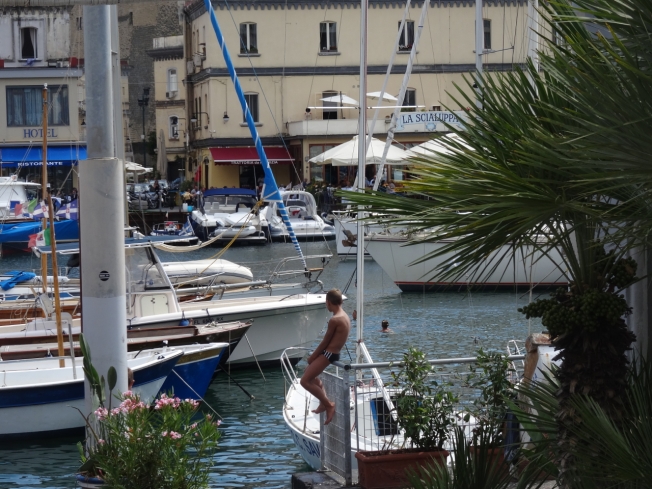 The marina in front of the Borgo Marinaro in Naples, Italy

There are marinas built over waters that swept in Parthenope herself.

And Posillipo sits lush above its shore.

It is a city where time has passed but never left.  There is the new and shiny …

Walls and doors tell their stories. 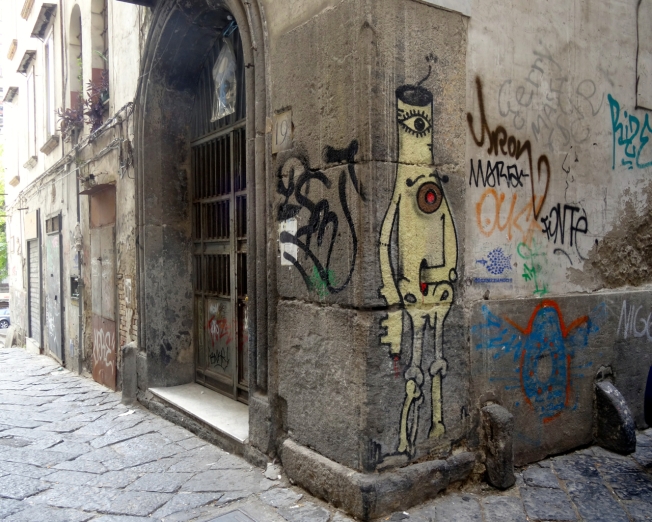 They sketch aggression and consequence.

They mark the university and where students have been.

They put a face on religion.

The bad, the good and the even badder  – Naples, Italy

They tell of the struggle between state, corruption and crime.

… and the passion that comes with it. 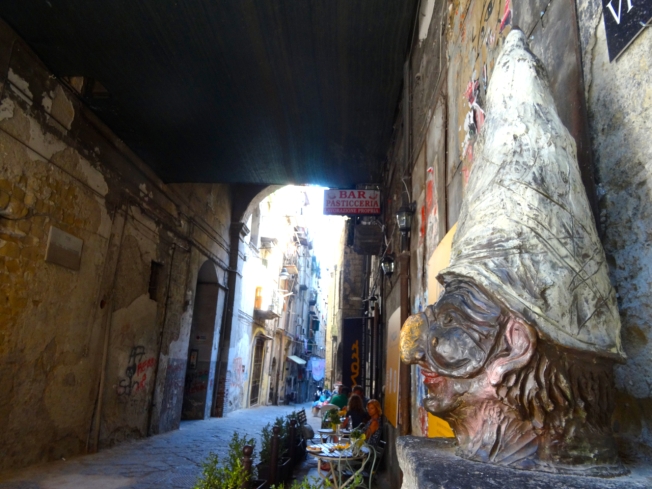 Naples is a city with complex roots, too elusive to capture fully as a visitor, but intriguing to step into. 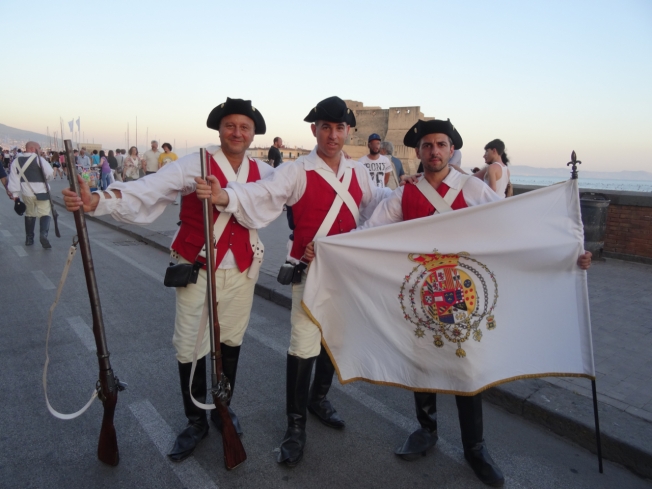 The flag of the Kingdom of the Two Sicilies

It’s been loved, abandoned, decorated, bombed, and threatened … it’s a city that survives.

If you have the chance to visit don’t hesitate. There are not many cities in Europe that combine so much treasure with such character – that bear the fingerprints of the Greeks and the Romans; the mythical and the sacred; of so many kingdoms and peoples.  It’s alive and it’s captivating.

Two tips to make the most of your time – visit when the temperatures will suit you most, and, if it’s your first visit, take a guide.

Napoli … a city to remind us of what other cities have lost.

Fireworks around the Bay of Naples seen from Posillipo

Two short YouTube clips to end the year with.  One stars the voice of Pino Daniele and the other Tom and Jerry.

6 thoughts on “Naples, Italy: on its way to the New Year”