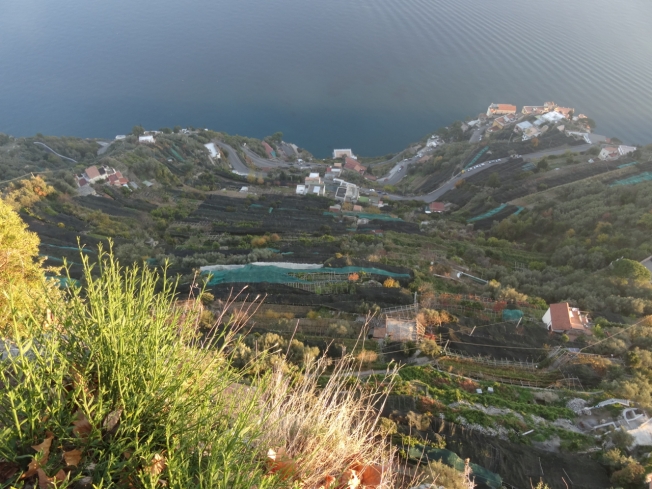 There is little more beautiful than a view that falls down cliffs over patterns of lemon groves, to the sea way, way below.  The senses drift in the sunshine, caught between sky and sea.

We found such a view on the Terrace of Infinity at the edge of the gardens of the Villa Cimbrone in Ravello.  It was a late afternoon at the end of December and hardly anyone was there. 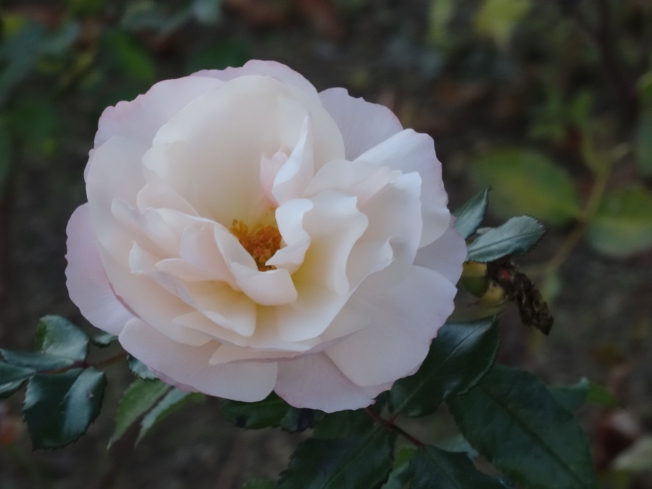 A December rose in its garden at Villa Cimbrone, Ravello, Italy

Ravello is so popular with tourists that in the summer it’s hard to know what would be there without them.

Part of the reason it gets so swamped is its location. 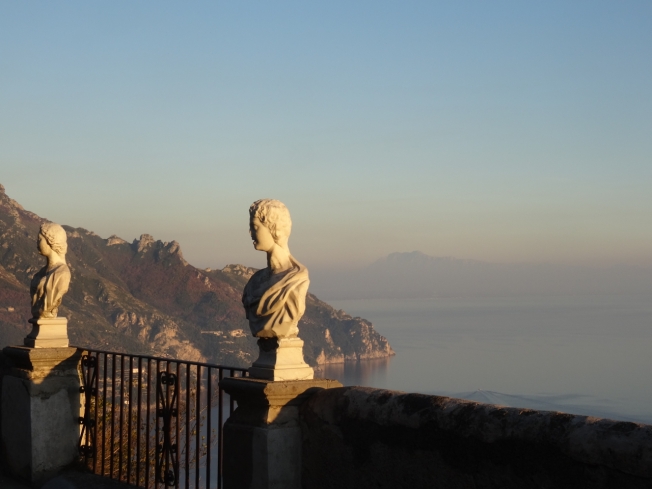 View across the sea from the Villa Cimbrone in Ravello, Italy

It’s high, it’s cooler than below, and when the clouds aren’t there, the gardens at Villa Cimbrone seem to have fallen entirely into a pot of sunshine and then been perched on the edge of a cliff to soak up some blue. 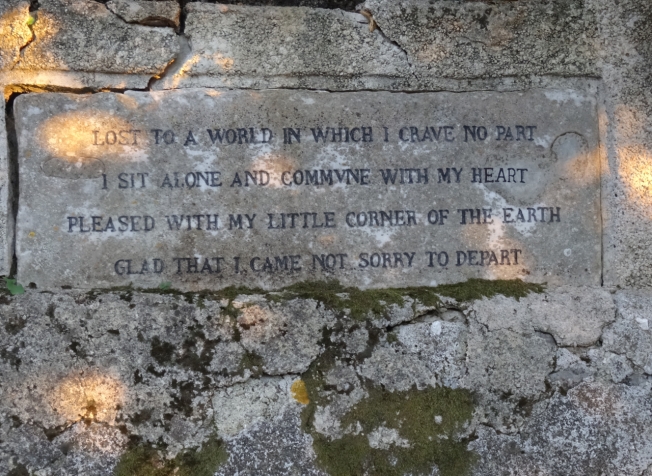 Inscription above Mercury’s Seat in the gardens of Villa Cimbrone, Ravello

On days without crowds there is a great feeling of seclusion, of places to hide. 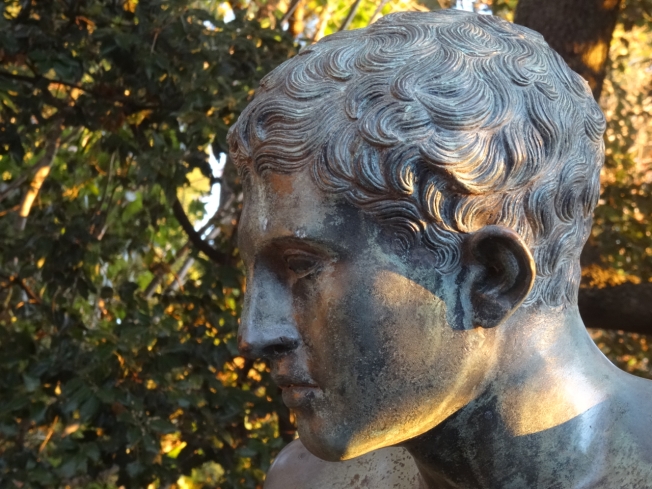 Statue of Hermes at Rest by Mercury’s Seat at Villa Cimbrone, Ravello, Italy

Statues pose amongst rose gardens and ornamental pots; busts turn their backs on the handsome view; and all around grand, ridiculous umbrella pines (Pinus pinea) stretch their cheerful arms up to the sky. 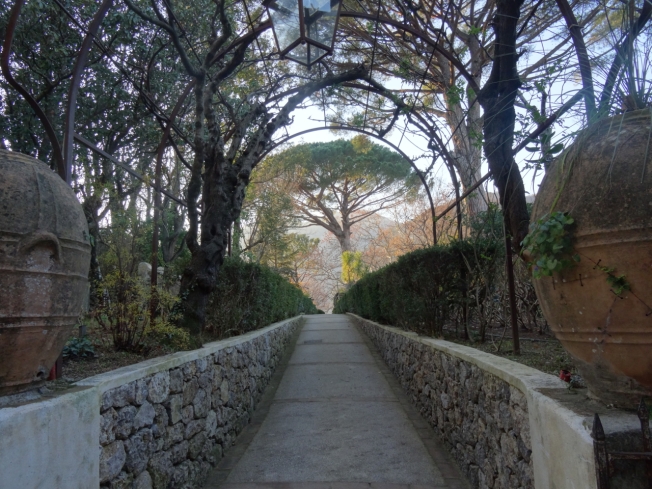 The gardens of Villa Cimbrone in winter

Time seems still on that cliff top, but its speed, and the repeated effects of love, neglect and restoration over the centuries have all left their scars. 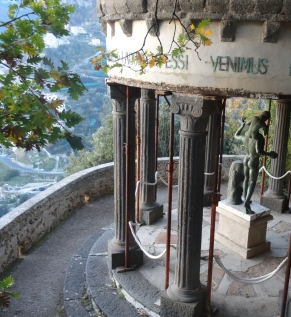 The Temple of Bacchus in the Gardens of Villa Cimbrone in Ravello, Italy

The villa, first a farmhouse and then an increasingly important residence and garden, was in powerful Italian hands until 1904 when it was bought by a wealthy Yorkshireman, Ernest William Beckett, who became Lord Grimthorpe. 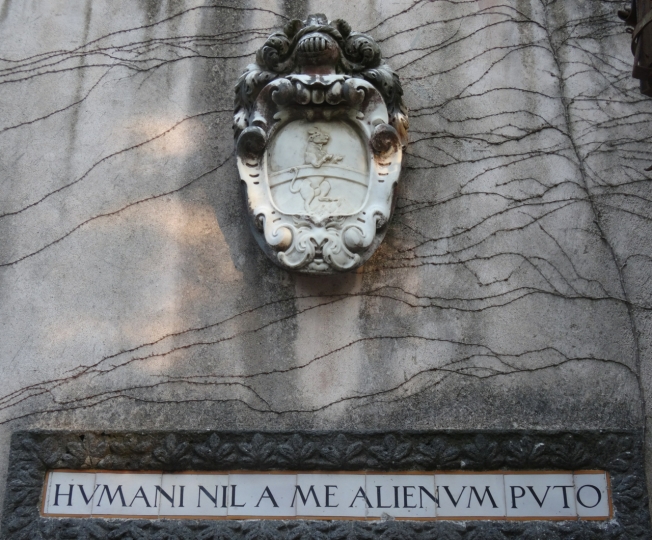 The Grimthorpe family crest and then this quotation: “Nothing of man is alien to me”

His young American wife had died in 1891 and he, known both before her death and after it, as a lover of beauty in all its forms chose Villa Cimbrone as an outlet for his passions. 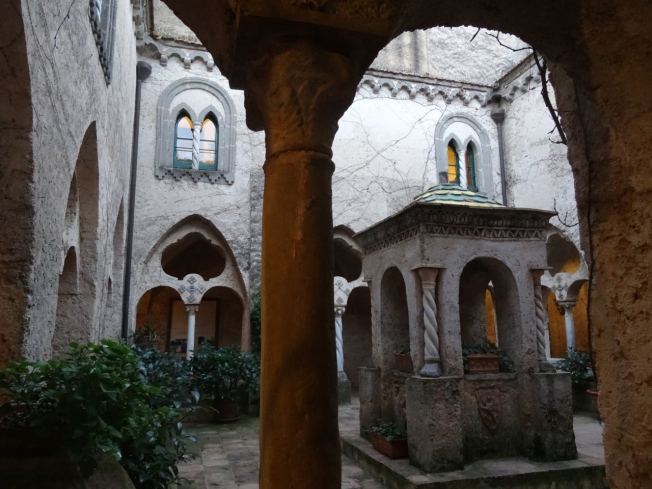 The location suited him perfectly, and the house and gardens went on to host some of England’s most creative and influential names from the early twentieth century.  It seems everyone from D H Lawrence, to John Maynard Keynes, to Greta Garbo has stayed there. 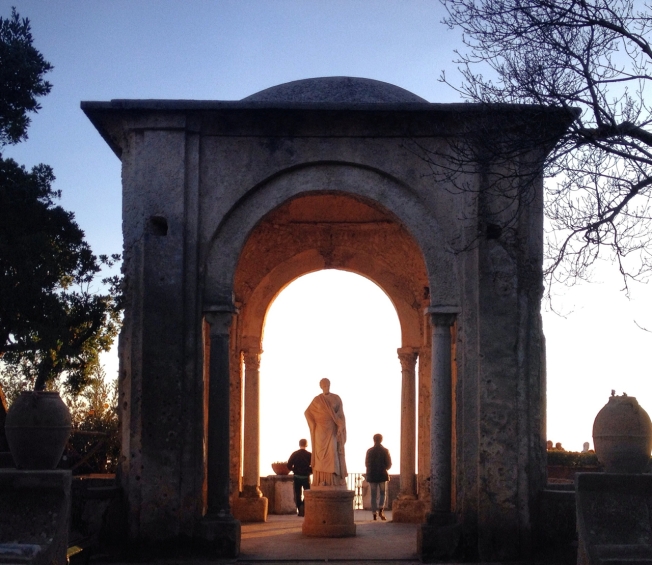 After Lord Grimthorpe’s day and the Second World War the Italian state took over the villa and it fell into decline, but there have been new owners since and extensive restoration.

Now, a little wobbly in parts, it sits as serenely as ever whilst the world traipses to and fro.  In high season it’s not easy to find a quiet day in Ravello but if you’re in the area in the off-season, and the skies are clear … don’t hesitate. 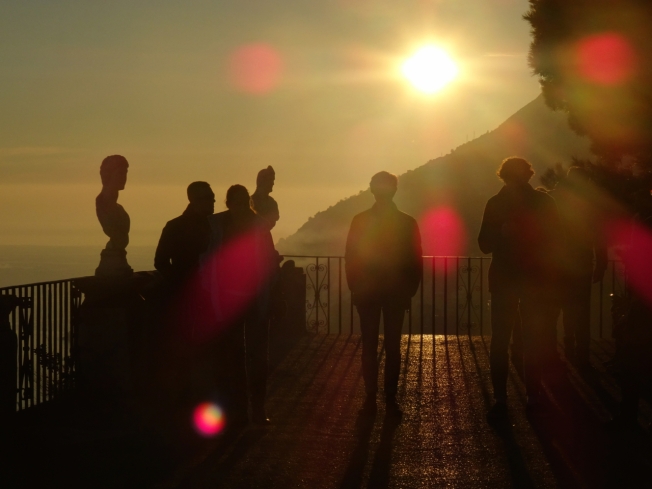 6 thoughts on “Ravello: The Gardens of Villa Cimbrone”

I don’t think this is as easy as it looks . #thethames #london #tugboat #citylife #riverview #onthewater #thephraser