Mural in rione Sanità in Naples, Italy – the district (rione) was known as Sanità originally because of the health benefits of living there.

The possibility of progress brings pride and hope, but it takes courage to guard the flame.

No-one needs to tell this to Sanità.  The district, ridden over by a road and tucked out of sight at the back of the city centre in Naples, is building a future for its children one day at a time. One bright gleam of opportunity shines around Sanità’s collection of treasures. 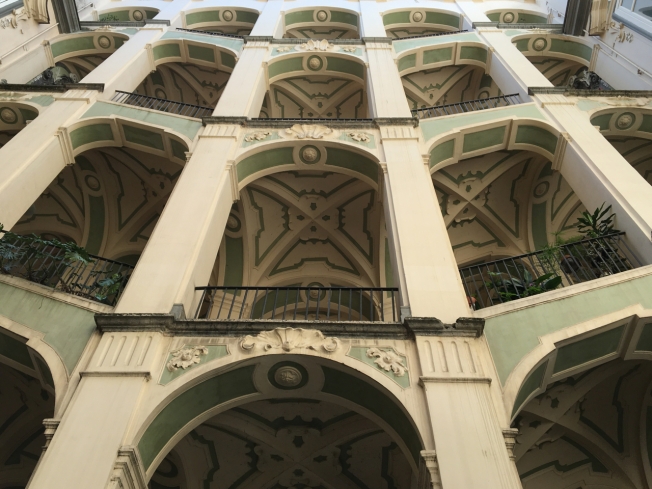 I have always wanted to see one particular treasure in Sanità, the only one I really know anything about – the Palazzo dello Spagnolo.

So, on a hot Saturday morning in early May, I walk across Naples to join a Curiosity tour at the Metro Station at Materdei, our meeting point.  There are about twenty of us in total, the majority local Italians including our guide who, like all the Campania guides I’ve met in the city, is young, female and crammed with knowledge.

Our first stop is the Cimitero delle Fontanelle.  I am curious but not keen.

We begin in the everyday suburbia around the Metro, then turn down a steep flight of stairs into an area that in parts looks as old and raggedy as a cardboard box washed up by the sea.

We squeeze behind our guide along the narrow pavements … cameras too embarrassed to look closer.

It’s a relief to turn suddenly in through a modest gate and to stare into the cool, calm welcome of a yawning cave.

The Cimitero delle Fontanelle in rione Sanità in Naples, Italy

The Cimitero delle Fontanelle is not an ordinary cave.  First, it has shallow rows of skulls shining like teeth along the lower edges of its tufa jaws; and second, rather than being dark stone and creepy, its walls are warm yellow and they lead the eye inwards until the shadows become too deep to see what lies beyond.

The cemetery began as a quarry carved out to provide the building stone for Naples but then, in the 1700s when disease and disasters struck the city so fast that the churches could not cope, the empty space was used as a place to leave the dead.

At first it was only meant to be used at times of crisis, but by the 1837 cholera epidemic it was also recognised officially as a burial site for the poor, and as a final home for the skeletons dug up during building programmes.

It’s a grim history but the big, plain Cimitero delle Fontanelle feels ordered and quiet.  There is no sense of trauma thanks to over a century of devoted respect.

This attention began with a tidy-up in 1872 under the care of a priest, Gaetano Barbati, and the local community who sorted and stacked the remains.  For some of those involved it was the start of an extreme devotion to ‘the abandoned souls (anime pezzentelle)‘ of Fontanelle. 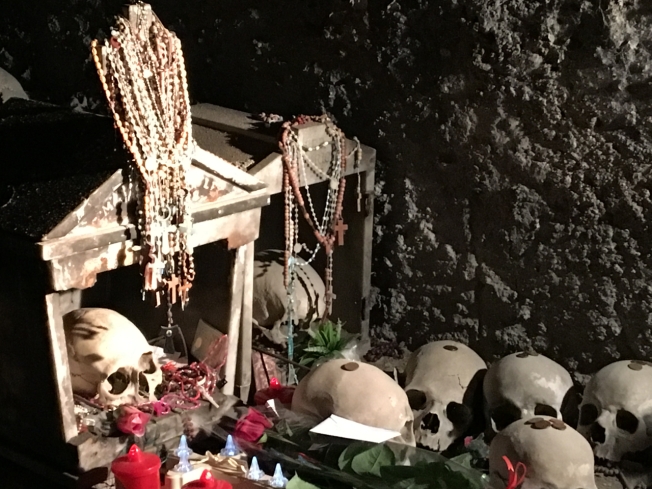 Skulls singled out for particular attention in the Cimitero delle Fontanelle in Naples, Italy

This ‘cult’ adopted skulls in the hope that care and offerings might earn the giver a break from some of life’s problems, or even a few lucky lottery numbers. Visits to the cemetery became a weekly fixture on the calendars of the devoted, many of them older women.  It was their chance to get out of the house, to enjoy the peace of the cool dark and to pour out their souls to the skulls of the departed in the hope that they, from the ‘hereafter’, might be able to influence lives in the ‘here and now’.

Skulls singled out for particular attention in the Cimitero delle Fontanelle in Naples, Italy

We wander through the main cave and its side chambers, listening to the stories that give context to the empty space.

We see the ‘capitano’ in gloomy state in his coffin; we hear how young mafia recruits test their courage in the cimitero; and how it’s considered auspicious for a grandmother to be accompanied by a grandchild when visiting a skull.

Around us light slants in through openings in the rocks, and the skulls stare … guarding their secrets.

That was four years ago in 2012.  Now life flows again through this chamber in the heart of Naples, much of it thanks to visitors.

We file out of the cemetery into the sunshine to follow our guide back into the streets of rione Sanità.

The streets of rione Sanità in Naples, Italy

We are the strangers in town, easy to spot in our pavement-hugging, single file. 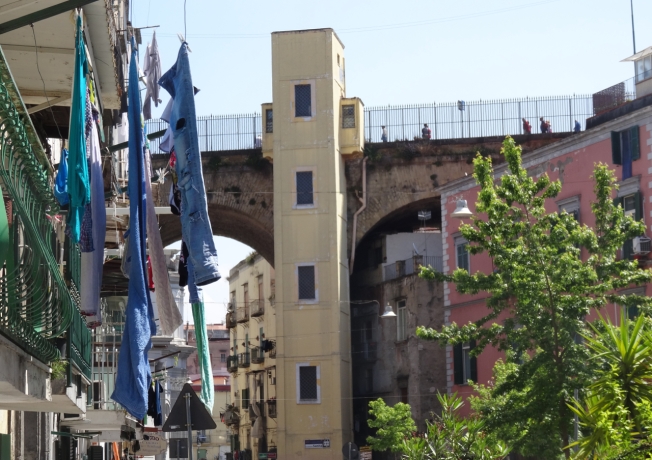 The road over the top of Sanità in Naples, Italy was begun by Joseph Bonaparte in the early 19th century and completed by Joachim Murat. It linked the palace of Capodimonte with the centre of Naples.

We pause briefly in the shadow of Bonaparte’s unapologetic bridge.

The Basilica of Santa Maria della Sanità in Naples, Italy

On the far side of the bridge the church of San Vincenzo ‘O Munacone (St Vincent the Big Monk) stands like a light beneath its dome of bright majolica tiles.  On one wall a deep-coloured mural faces on to the piazza while opposite, on a much-tireder block of apartments, giant children smile back.

The mural in rione Sanità in Naples, Italy that faces the Basilica di Santa Maria.

Unwittingly both these works of art framed a killing two weeks earlier that left two dead and three injured. 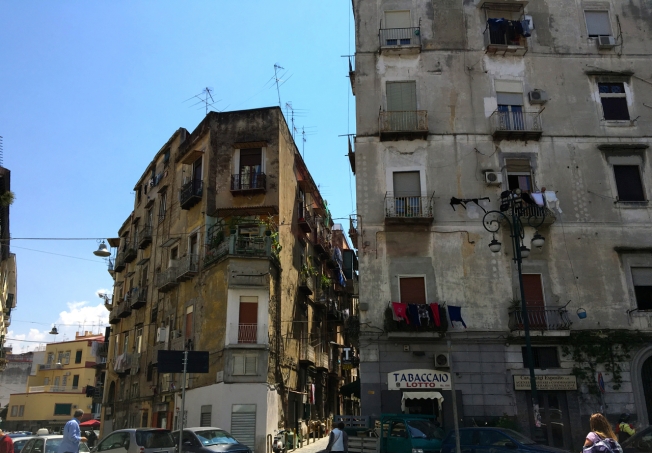 Naples, Italy – rione Sanità – the corner that stands between the two murals and faces the bridge.

We go into the church for a quick visit.  It was built between 1602 and 1610 and is officially titled the Basilica di Santa Maria della Sanità but is known by locals as San Vincenzo in memory of the saint whose statue they believe halted the cholera epidemic of 1836.

The church is clean and wide with its share of fine art, but right in the middle of its elegant cloisters is the brutal leg of the road bridge that carries traffic above the area, and which leaves, as it has always done, much neglect trapped in its shadow.

The leg of the bridge that stomps through the middle of the curved cloisters of the Basilica di Santa Maria della Sanità in Naples, Italy

The leg of the bridge that stomps through the middle of the curved cloisters of the Basilica di Santa Maria della Sanità in Naples, Italy

From the church we set off in search of another piece of Sanità’s soul – the birthplace of Totò, in one of the oldest streets in the district, the Via S. Maria Antesaecula.

The street feels old – it’s like a walk down the sleeve of a moth-guzzled jumper. 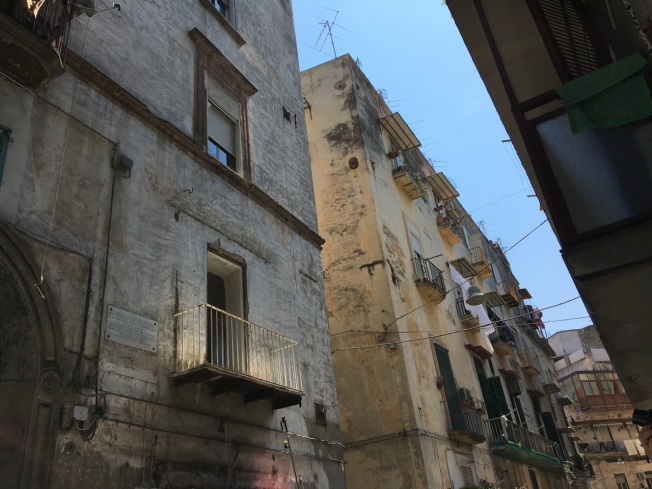 The street where Totò was born in Sanità in Naples, Italy

The first home of Antonio de Curtis (Totò) – Italy’s genius actor and comic – is just as worn as the rest but the plaque is clean and proud.

Plaque marking where Totò was born in Sanità in Naples, Italy on 15 February, 1898

He was the illegitimate son of the Marquis Giuseppe De Curtis and spent his early years and youth with his mother in the area where he was born, without the support of his father.

Theatre fascinated Totò and he was on the stage by the time he was fifteen.  His acting career, interrupted by the First World War, moved happily between stage and film, and his charisma and his brand of the seriously absurd carried him from one success to the next.

He had a complicated love life and a pedigree that by the end included a full paragraph of titles from two aristocratic fathers: one of them was adopted – the Marquis Francesco Maria Gagliardi Focas – and the other was his own father who did later admit the paternal link.

Totò’s life may have been remarkable, but what’s remembered in Naples and across Italy is his lopsided face and the huge range of his work.  Sadly, outside the country’s borders, it seems he’s barely known at all. 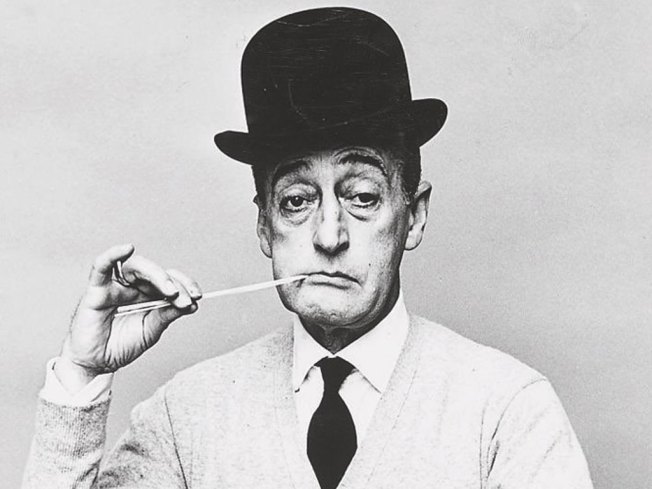 From the tired building where Totò was born we have one last stop – the Palazzo dello Spagnolo. 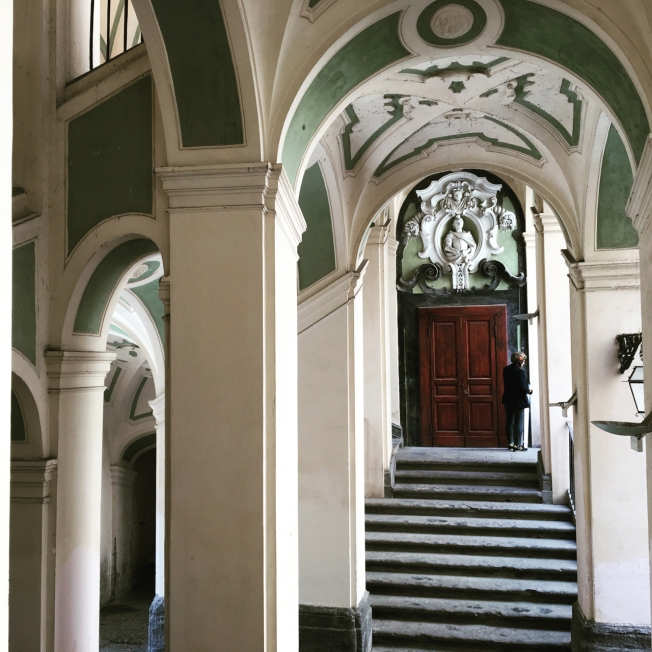 The Palazzo dello Spagnolo in Sanità in Naples, Italy. The building carries the nickname of the man who bought it in 1813, Tommaso Atienza, known as ‘Lo Spagnolo’.

It’s exactly as I imagined it, bright and beaming – a smile of a building – while its twin next door gapes in grey.

The ‘twin’ of the Palazzo dello Spagnolo is the Palazzo Sanfelice, built between 1723-1728 by the architect Ferdinando Sanfelice for his own family, and once considered one of the finest palazzi in Naples.

A family of artists, who live in one of the building’s large apartments, host us to a generous brunch.

The artists’ apartment in the Palazzo dello Spagnolo

It’s a breezy, cheerful occasion, full of promise, whilst below us the markets and the locals go about their business – just getting on with getting on. 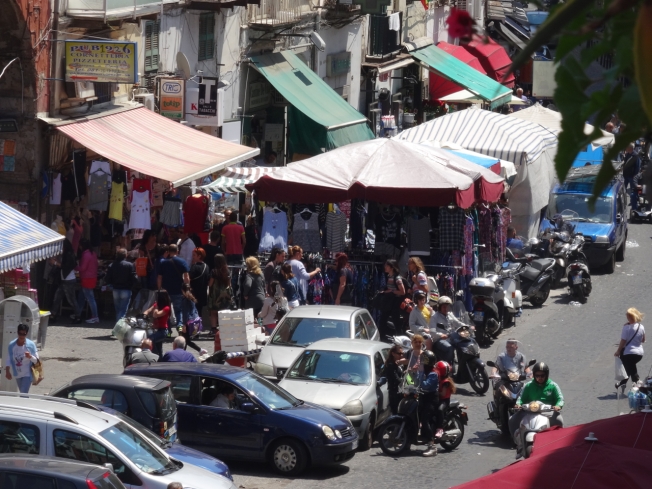 Via Vergini in rione Sanità in Naples, Italy

With thanks to our excellent guide Stefania Russo: stefaniarusso@gmail.com.  Click this link to reach Curiosity’s Facebook site.

Below are three YouTube links: the first, a Totò clip where he plays a general interrupted in his work by the news that he has been made redundant (a gentle ten minutes if you have them to spare); the second, a much shorter clip of Totò, the physical comic; and the third, a two-minute trailer for John Turturro’s film Passione that features the Palazzo dello Spagnolo.

The road over the top of Sanità in Naples, Italy

7 thoughts on “Naples, Italy: a visit to Rione Sanità – skulls, scars, Totò and a grand palazzo”