Some evenings unwrap like the best parcels – one surprise at a time.  This is one of those evenings.

We’re part of another Curiosity Tour of Naples.  I’d signed us up for two reasons – the first was to visit the old red tower I’d seen above Naples so often; and the second was to show our visiting artists the Museo di Capodimonte.

The tower is part of our lives here in Naples.  We see it on every trip along the tangenziale from the airport at Capodichino.  It stands tall and mysterious above the dark green of the bosco di Capodimonte.  It is an exotic exclamation mark above a city outlined in rectangles. 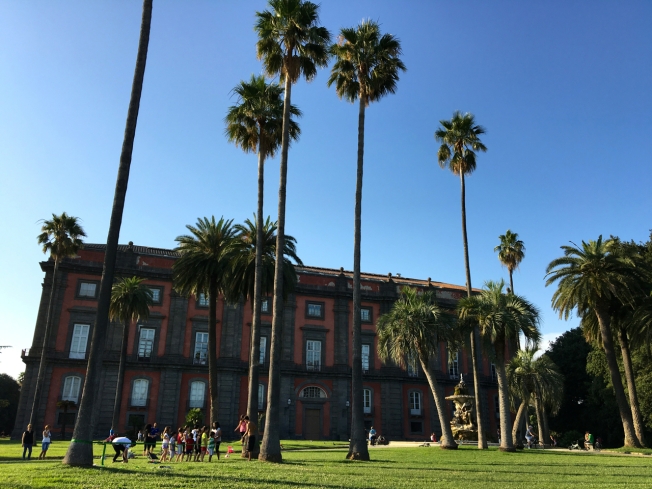 Part of the park that surrounds Capodimonte Art Museum in Naples, Italy

The tour begins at sunset.  We gather by the gates of Capodimonte park, and then follow our two guides out into the streets beyond.

There are cafes, scooters, uneven pavements, balconies loaded with washing … and then, suddenly, on our left a large door in a high wall.  The red tower is on the other side.

Palasciano, clever and influential, was born in Capua; served in the Bourbon Army as a doctor; and earned degrees in literature, philosophy and several medical sciences. 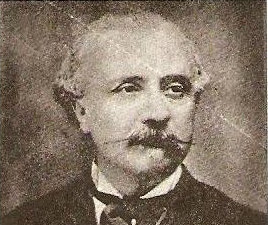 In 1848 at Messina, during the Italian Wars of Unification, Palasciano, a young military doctor at the time, risked everything to treat the wounded of both sides. This, for most, was treason.  Palasciano was arrested, courtmartialed, and might have been shot if the king had not stepped in.

Today his reputation has swung right round.  Now Palasciano is a hero, a foundation-layer for the Red Cross (founded in 1863 by Jean-Henri Dunant), and for the first of the Geneva Conventions (1864) for the “Amelioration of the Condition of the Wounded in Armies in the Field“. 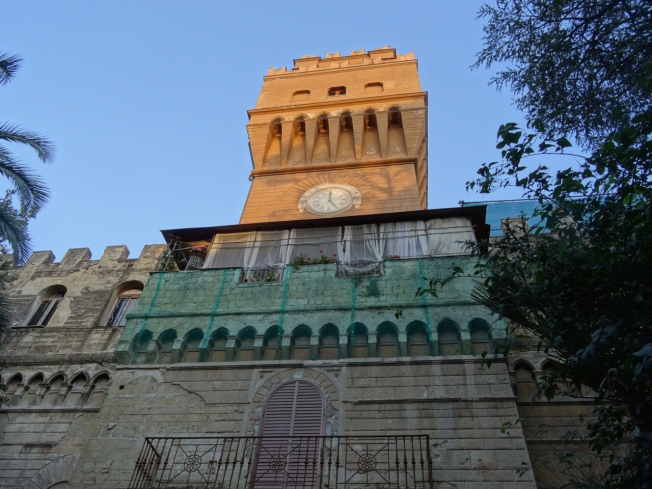 Nothing on the tower records any of this – it simply stands, individual and unabashed, a tribute to a man who knew what he stood for.

A narrow staircase winds up the inside of the tower.  We follow it up to the terrace and its view of the crowded city, caught between Vesuvio and the sea.

The sun sinks, the sky reddens, and we sip wine suspended in the sky in a family home … in a living work of art.

It’s dark by the time we file down the stairs.  In the half-light our hostess, part-trapped and part-empowered by the tower, watches from a balcony above as we leave the courtyard.

‘Torre di Palasciano’ in Naples, Italy – now a bed and breakfast under the name of ‘La Torre di Rò’

Our next stop, the art museum in the Royal Palace of Capodimonte, is not far.  The night is warm and close, and inside the palace it thickens further, the heat trapped in the vast, high-ceilinged rooms.

The freshly cleaned fountain at the many-windowed art museum of Capodimonte in Naples, Italy

Our tour begins with the portraits in the Farnese collection.  We start with Titian’s ‘Pope Paul III (Alessandro Farnese 1468 – 1549) with his grandsons’.  It’s a good point to begin as this is the pope who built the Farnese collection of art, passed down through the centuries to Elisabetta Farnese, the second wife of Philip V of Spain.

Elisabetta, stuck in Spain, encouraged her son Carlos to take the crown of Naples … which he did, aged 18, in 1734.  He then commissioned several palaces, including Capodimonte, which still houses much of his mother’s famous art collection. 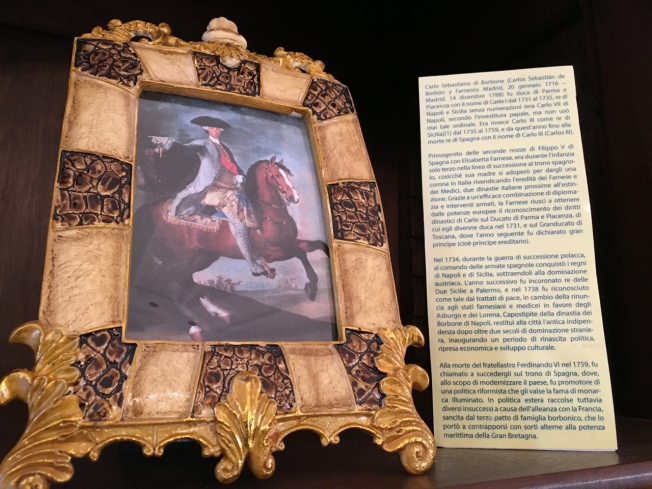 Carlo Sebastiano di Borbone (this small picture and information is on display in ‘La Casina Vanvitelliana’ on Lago Fusaro, near Naples, Italy)

Capodimonte itself has not had an easy history.  It took a century to build (it was finished in 1838) and within just a few bumpy decades had to be handed over to the rulers of the newly united Italy, the House of Savoy.  Sixty years later it changed hands again.  This time the treasure chest went to the Italian state and in 1957 it began its new life as an art museum.

Today, filled with some of the finest art in Europe, it still sits on its hill overlooking Naples.

Our tour moves from Titian, to a golden work by Tommaso Cassai Masaccio (1401 -1428), an early master of the vanishing point in perspective.

Then on to Michelangelo, Pieter Bruegel the Elder and others.  We pause in front of selected canvases, learn what we should know, and then move on along the great corridors.

Detail from the Porcelain Room at Capodimonte in Naples, Italy

We pass the painting of a young King Ferdinand (son of Carlo di Borbone) and visit the porcelain room, where the lights go out on us briefly.  This is the signal to move.

Detail from the ballroom at Capodimonte in Naples, Italy

We turn briskly through the lavishly decorated ballroom; stride past the big canvasses by famous Neapolitan artists such as Luca Giordano; and rush up the stairs to the next level.

Time ticks past 10 o’clock.  We race past Anselm Kiefer’s canvas, desperate to reach Caravaggio … but all is in vain.

Three guards, each chopped from Neapolitan stone, block our passage.  They stand shoulder to shoulder.  It’s too late.  Time up.  We have to leave.

In panting disarray we pause, the rush and clatter of our shoes over the marble floors falls silent.  The enthusiasts are on the frontline, the dawdlers somewhere at the rear … in front of us all, the implacable guards.  The body language does not look good.

Our guides beseech and implore but the blockade does not blink, it does not budge one bit.  Then, from the middle ranks there is a ripple.  A broad man in a white shirt squeezes his way through us to the front.  He stands chest to chest with the guards.  Rapid Italian, hand-rich and fervent, flies to and fro.  We watch.  We wait.  We listen and we learn.

This is a fine performance.  We are impressed.  The guards are impressed.  We watch the shoulder-tight barricade become less rigid.  Cracks appear, grow wider, then suddenly split.  We charge through.

Then I remember – I hesitate, turn back to explain that some are still behind in the dark corridors, probably lost, and doomed to miss Caravaggio. 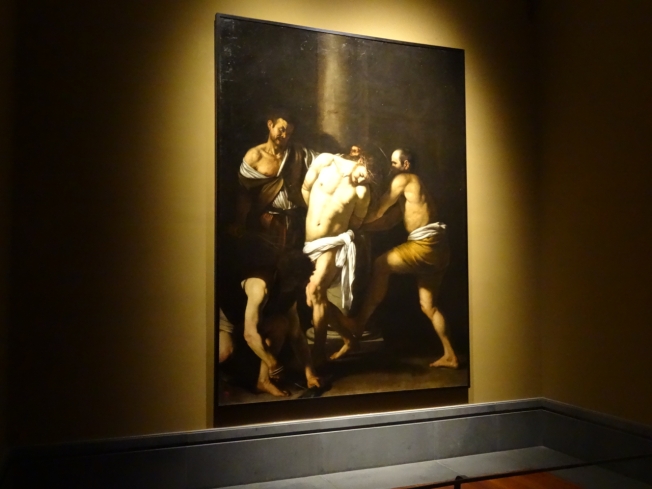 ‘The Flagellation’ by Caravaggio (Capodimonte in Naples, Italy)

There there it is:  ‘The Flagellation‘ – light, dark, dramatic, framed by layers of doorways.  It’s all ours.  We pause, breathless …

‘The Flagellation’ by Caravaggio (Capodimonte in Naples, Italy)

… and long enough for even the last of the stragglers to get a glimpse.

The road home from Capodimonte – the tangenziale that bypasses much of Naples, Italy

Here are a few of the links to some of the sources used in this piece:

Details about the life of Ferdinando Palasciano (in Italian)

Details about the life of Ferdinando Palasciano (in English from Life, Death & Miracles by Jeff Matthews)

Link to the Red Cross and details of the Geneva Conventions

Information on Titian from the New York Review of Books

History of Capodimonte from Life, Death and Miracles by Jeff Matthews.

Finally, a link to the bed and breakfast ‘La Torre di Rò’, to the art museum at Capodimonte  and to Curiosity Tours. 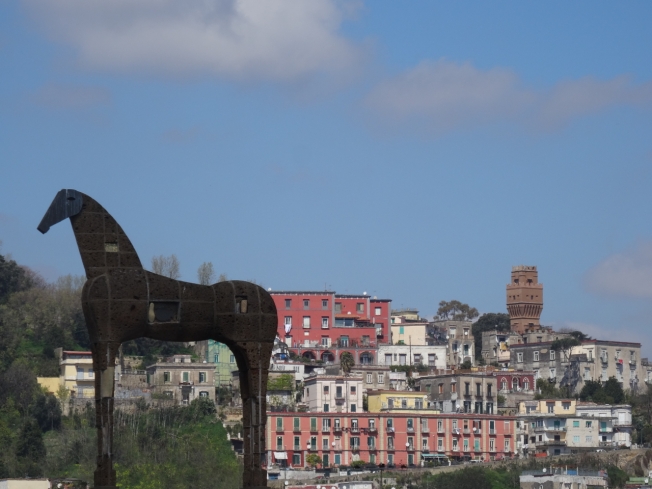 View towards Torre del Palasciano from the Madre Art Museum in Naples, Italy

One thought on “Naples, Italy: a towering view, and a night of art in a royal palace”