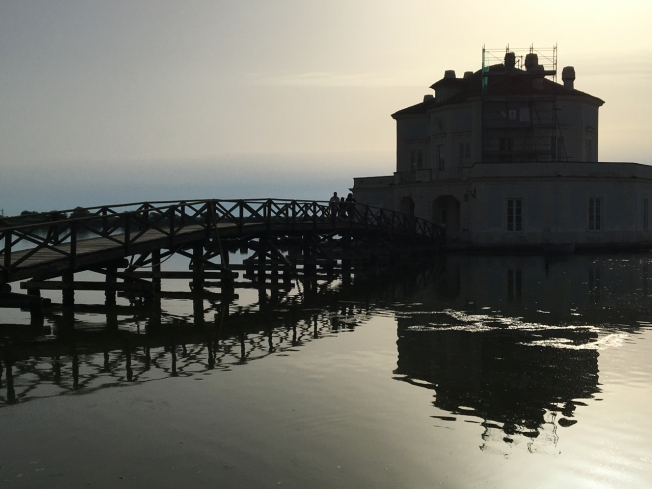 If I had the money to save a building of all those that I have seen this is the one that I would save.

We saw it for the first time this summer – small, elegant, corroded and propped up; its perfect proportions reflected in the blue green lake as the sun went down.

The lodge sits just inside the lake, completely surrounded by water, each of its sides open to different views.

To the front is the sea separated from the lake by a strip of land, while behind and to each side, buildings push up through the trees with some parts more concrete than green.

On the shore closest to the Casina Vanvitelliano, just across the wooden bridge, is the park

The two men who created this lodge knew each other well.  Both their families had worked together before, both were the sons of famous men, and both had foreign grandfathers.

La Casina Vanvitelliana – a Bourbon hunting and fishing lodge built (1782) on the lake that it’s thought Virgil’s Aeneas knew as the Archerusian swamps where Cerberus, the three-headed dog, kept watch for those who might try to exit hell.

The man who commissioned the building, Ferdinando IV, King of Naples, was the son of Carlo di Borbone, the young royal from Spain who took the throne of Naples in 1734 aged 18.

The man who designed it was Carlo Vanvitelli (1739-1821), the son of Luigi Vanvitelli who was the architect and engineer for Carlo di Borbone.

But before they could start on ‘la casina’ they had to finish a very different project – the royal palace at Caserta, one of the grandest palaces in all of Europe. 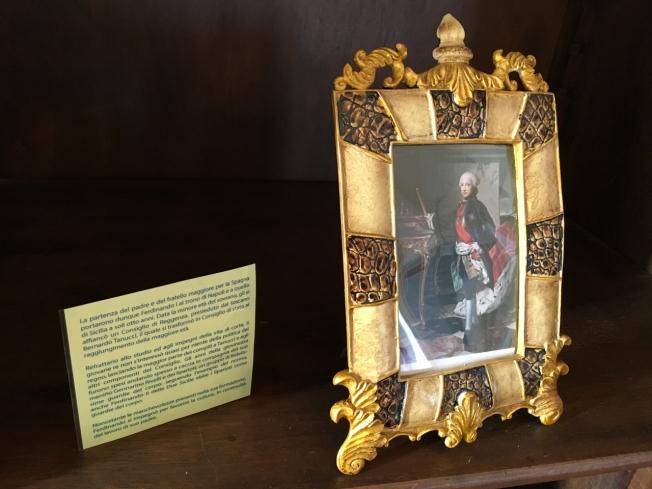 Their fathers had begun this super-palace but neither of them were there to finish it off – Carlo di Borbone had been called back to become king of Spain (1759), and Luigi Vanvitelli died in 1773 the year before the palace was more or less completed.

Plans for the royal palace at Caserta near Naples, Italy

This left Ferdinando IV and Carlo Vanvitelli in charge.  By 1774 the palace, with its 1,200 rooms and almost three hundred acres of gardens, was more or less complete.

Caserta out of the way there was time for new projects and Lago Fusaro was chosen to host one of them – the little poem of a building we visited in late July – La Casina Vanvitelliana.

This royal playhouse is so cleverly designed, so pleasing, that you almost forget how many straight lines are involved.  In all it has twelve sides, and two main floors each with a large central room which has been angled into a round.

The ground floor of La Casina Vanvitelliana on Lago Fusaro near Naples, Italy

The building as a whole is pale and petite, surrounded by a natural lake, and, unlike its giant of a cousin, has no fountains or formal gardens.

A stairway in the royal palace of Caserta outside Naples, Italy – just one of these archways is as monumental as a city gate.

But what La Casina Vanvitelliana does not have in size and assertion, it makes up for with poise and position.

Lago Fusaro, once famous for its oysters, circles the Casina Vanvitelliano

View to Ischia from La Casina Vanvitelliana on Lago Fusaro in Campania, Italy

It sits like a pearl near the edge of a shell, with the lake for its setting.

Perhaps this was the original intention as under Frederick IV Lago Fusaro became famous for its oysters.

View across Lago Fusaro from Parco Vanvitelliano, by the bridge leading to La Casina Vanvitelliana

The lodge also entertained many of the celebrities of the day – including, as far as I can find out, Nicholas I Tzar of Russia, Wolfgang Amadeus Mozart and Gioachino Rossini.

Inside it was well known for its landscape scenes by Sir Philip Hackert and the beauty of its tiled floor.  Apparently the paintings were removed during the revolution of 1799 and the tiles on the floor disappeared after the Second World War.

So, it’s a little denuded today but the light and air are still there, as well as the careful brilliance of the building’s design.

To the front of the Casina Vanvitelliana are views to the sea and the island of Ischia. The pictures give an idea of what Sir Philip Hackert’s works must have looked like.

Originally the only way to reach the lodge was by boat.

It’s easier now thanks to the addition of a relatively new feature, a wooden bridge which is sought after as a backdrop for wedding photographs. 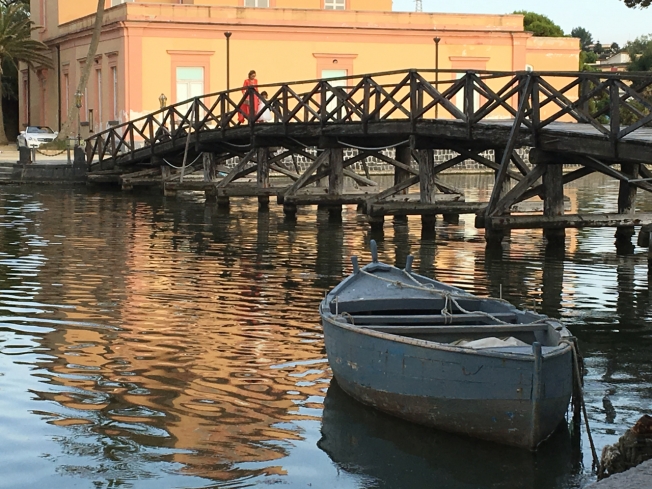 On the evening we visited several parties waited their turn in the park but no-one seemed to mind the wait – or the weary plaster, or the scaffolding – because something else … the romance was clearly still there. 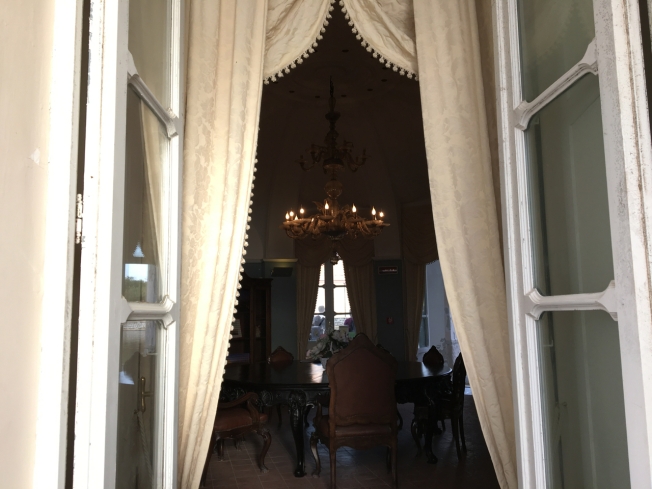 The ground floor of La Casina Vanvitelliana on Lago Fusaro near Naples, Italy

La Casina Vanvitelliana feels like a place that’s been loved, and that is still loved by those who know it.

I hope it finds its saviour because at the moment the fact that it’s open at all is thanks to volunteers.

A few sources for further interest are:

A piece in Italian about the oysters on Lago Fusaro