Stories attract me to places, they’re an introduction, the start of a conversation.

Taranto in the south of Italy, has many stories, almost too many to bear.  Today it’s the ‘for sale’ sign that’s crunching consciences – the huge steel works that have dominated and contaminated the city for decades are on the market.

We visit Taranto on our second full day in Puglia – this is about what we find.  It’s a lot more than just steel.

Taranto, “city of the two seas”, lies on the Ionian coast.  Look down at the city from above and its the scoop of its lagoons, once famous for their mussel farms, that catch the eye.

Our route towards the città vecchia takes us in through the consequences of a 1950’s political decision to turn this rural, coastal area into acres and acres of steelworks.

Instead of the olive trees we’ve grown used to, tall chimneys sprout amongst stiff metal frames.  They stand in stained air above the frayed, tired outskirts of the city. 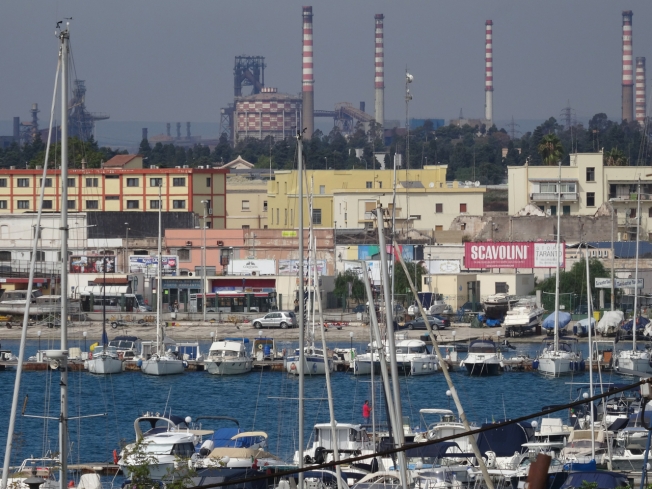 Seafront in Taranto in Puglia, Italy

Once on the seafront itself a better view stretches ahead.

We find a car park where we are directed into a space by a tall man in a flourescent vest.  Chiselled from the tombs of Sparta, he knows, and we know, that there is no-one better equipped to protect anything. Negotiation over the cost is not an option. 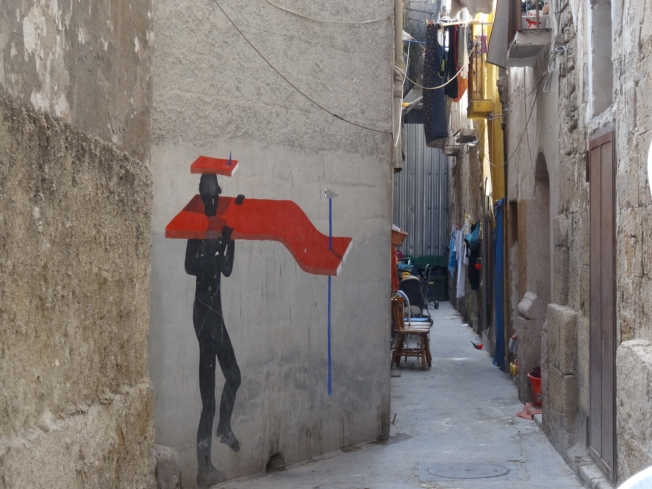 The old city in Taranto in Puglia, Italy

The old town feels familiar, similar in parts to the centro storico in Naples but the atmosphere is different.  Naples is a river of life – in old Taranto the streets feel empty and uneasy. 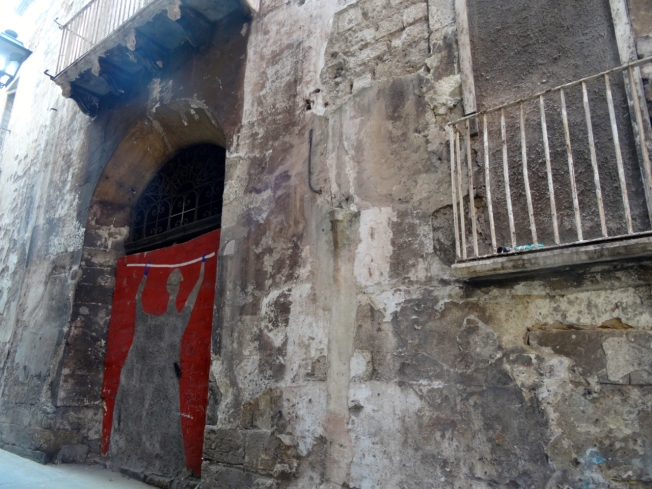 The old city in Taranto, in Puglia, Italy

We pass a dark-doored bar with a few customers.  Amongst them, large on a plastic chair, is our car-minder.  We exchange nods, surprised, and move on … perhaps our backs are included in the price.

A few families appear around corners but for the most part there is little other than echoes and the splash of a washing line or two.

The old city in Taranto in Puglia, Italy

In the cathedral piazza it is different.  There is a sudden burst of life with flowers, and the tail end of a well-dressed wedding.

Decoration above the door into the Cathedral of San Cataldo in Taranto, in Puglia, Italy

The cathedral doors are open for a few minutes while scattered rose petals are cleared from the entrance. 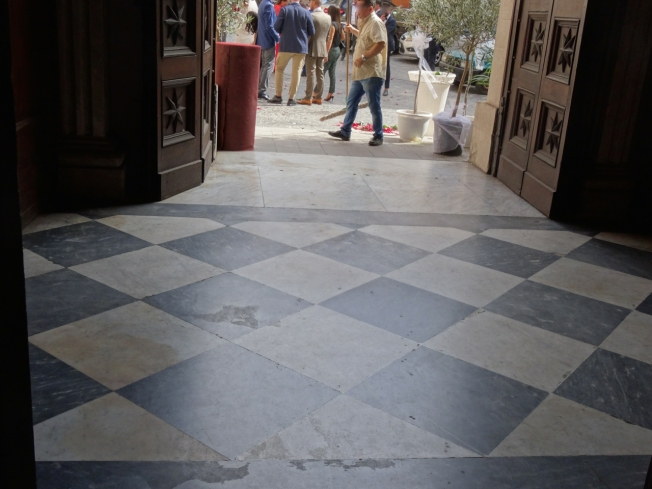 After the wedding – The Cathedral of Sant Cataldo in Taranto, Italy

Immediately inside the large doors there is a small room to one side with a large, impressive baptismal font that stands under its own canopy.

The baptismal font in the Cathedral of San Cataldo in Taranto in Puglia, Italy

Beyond, at the far end of the church, is the chapel to Saint Cataldo, the Irish monk after whom the cathedral is named. 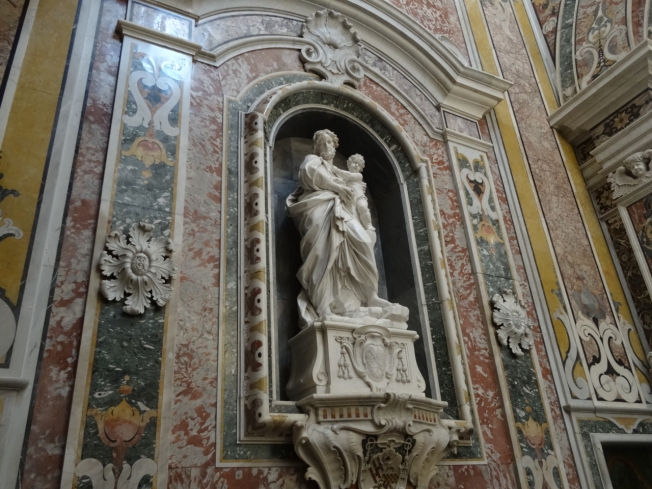 ‘Il capellone di San Cataldo’ in the cathedral in Taranto, in Puglia, Italy

The small chapel is patterned in marble – intricate detail fills every inch of the walls, interrupted only by occasional pale statues, each perfectly preserved. 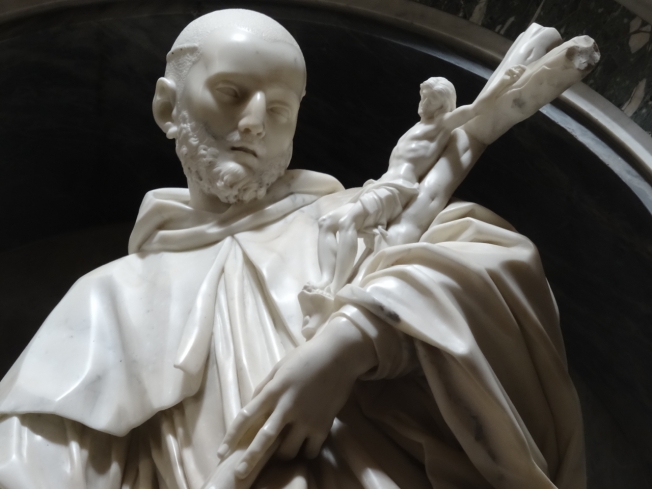 ‘Il capellone di San Cataldo’ in the cathedral in Taranto, in Puglia, Italy

This 18th century chapel is within the cathedral complex built by the Normans in around 1070.  Both are in the name of Saint Cataldo who is said to have trained at Lismore in Ireland before he became Bishop of Taranto, the city where he died in around 550AD.

The altar in ‘Il capellone di San Cataldo’ in the cathedral in Taranto, in Puglia, Italy

The petal-sweeper enters the building.  His keys rattle as he runs his final checks.  I exit a few seconds ahead of him to continue our wander through old Taranto.

The 12th century Norman bell tower, destroyed by an earthquake in 1456 and rebuilt in 1952

The old city’s other highlight is the church of San Domenico Maggiore.  This building, raised above the street and almost within sight of the sea, is shut by the time we find it. 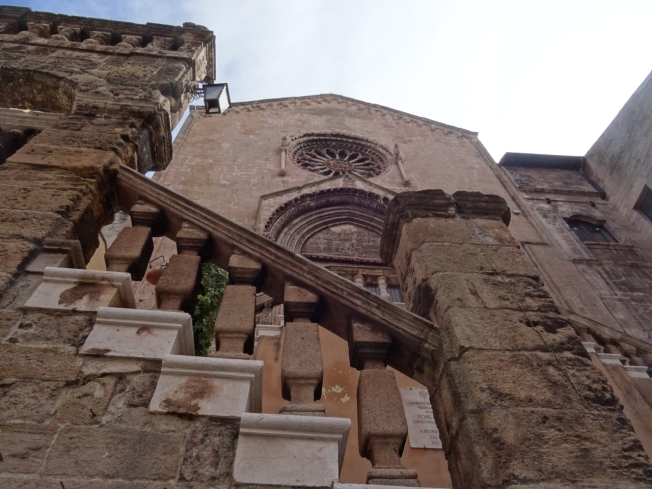 It’s close to the seafront, and the relief of the open air is made all the more precious after a tight shave with a male-loaded motorbike in an empty alley.

The wide road above the bay gives us our first sight of the sirens perched on the rocks in the sea below.

The stained statues of the sirens in Taranto, in Puglia, Italy

Their story, like the city’s, has been complicated by suitors.

Taranto has had many admirers.

It was the Spartans in the 8th century BC who arrived first.  They founded Taras – beautiful, confident, and once the wealthiest colony of Magna Graecia.

Success attracted fresh suitors, some more violent than others.  They came, they left, and occasionally returned again: after the Greeks came the Romans; then the Byzantines; followed by the Normans; the Longobards; the Arabs; the houses of Anjou and Aragon; the Turks; the Bourbons; the French; Garibaldi and a united Italy; the bombs of the Second World War … and then industrialisation.

A stained siren in Taranto in Puglia, Italy

It’s also no surprise that she’s tried to protect herself.  The curved belligerence of the castle on the edge of the old city is irresistible.

The castle in Taranto, in Puglia, Italy

Excellent, free guided tours cover the history of the castle and plans for its future.

The history, and future, of the Aragonese Castle of Taranto in Puglia, Italy

Our guide is an enthusiastic expert on the design of the building and the threats it has faced. 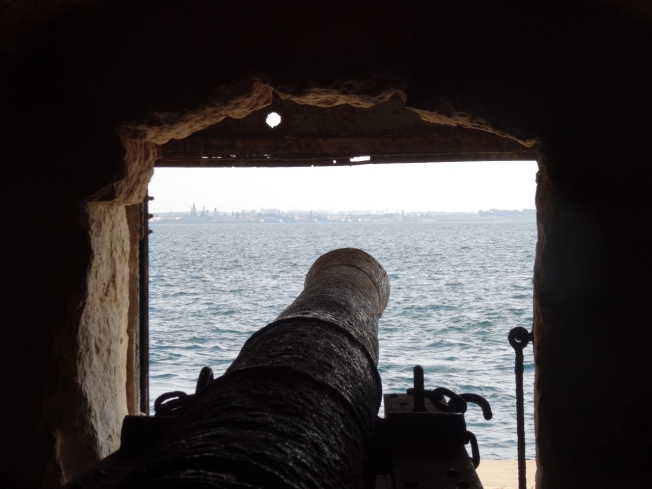 The castle in Taranto, in Puglia, Italy

He takes us deep into the foundations of the castle and down to the water’s edge.

Old walls in the Aragonese Castle in Taranto, in Puglia, Italy

The tour ends with a technical discussion about the canal that joins Taranto’s mar piccolo to its mar grande, and that runs beneath the bridge that links the old city to the new city.

The bridge in Taranto that links its two seas, as well as the old city to the new city

The new city, on the far side of the bridge, looks and feels different to the old city where we began.

The figures, some 7 metres in height, remember those in the Italian navy killed between 1940 – 1943

Two giant figures stand at the end of the promenade with their faces out to sea and their arms raised – a shout of welcome perhaps?

The inscription on their base remembers the Italian naval personnel who died in the Second World War between 1940 and 1943, a date range that includes November 1940 when the Italian navy was destroyed in the bay by English bombers in the ‘Battle of Taranto’.

The statue in Taranto in Puglia, Italy dedicated to those who lost their lives in the Italian navy between 1940 – 1943

Seen from the opposite side the shout of welcome becomes a cry for help – the gesture more of drowning than waving.

The sculptor is Vittorio di Cobertaldo and his Monumento al Marinaio d’Italia is one of the most memorable public sculptures I’ve seen, and the location is perfect.

A street in new Taranto, in Puglia, Italy

The pedestrianised shopping street is clean but quiet. So too is the park where we take the dog later that afternoon.

A park in Taranto, in Puglia, Italy

The green space by the sea is ours for the evening apart from an alcoholic couple on a bench, and the occasional stroll of young sailors in clean white uniforms. 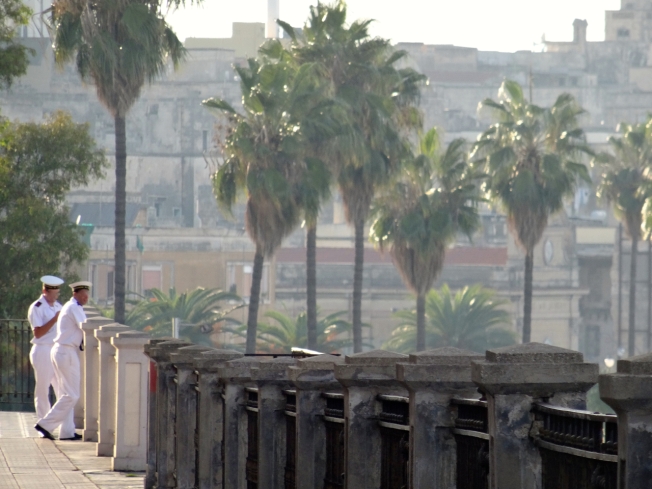 Sailors, taking a break in Taranto, in Puglia, Italy

The mood is listless rather than edgy in this end of town.

As the light fades, we make our way back over the bridge towards the old city and the car.

The mare piccolo in Taranto, in Puglia, Italy

It is exactly where we left it but without its minder.  We climb in and start our journey back towards the agriturismo. 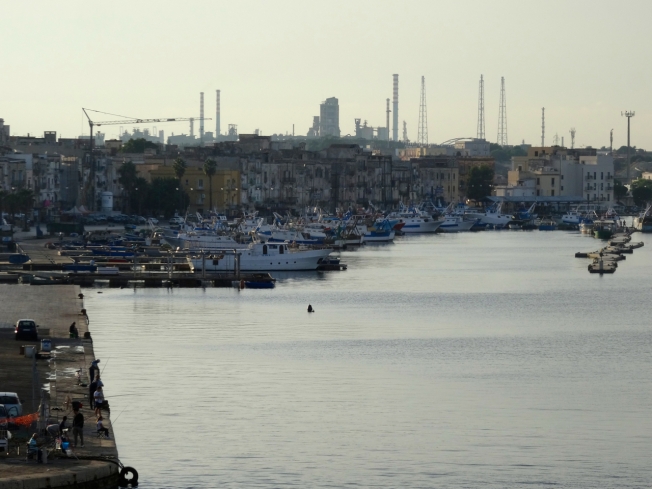 It’s been a day of shadows pushed back by the determined castle, but even it can do little to free the city from the heavy shackles of the industries that surround it:

“… the most important steel production plant inEurope (ILVA), one of the biggest in the world, an oil refinery,a cement works, two power thermoelectric plants, and threewaste incinerators”
(taken from The Mar Piccolo of Taranto: an interesting marine ecosystem for the environmental problems studies).

A siren on the rocks in Taranto, in Puglia, Italy

The tarnish is obvious – Taranto, city of the two seas, is trapped …

My thanks to Glynis Brown for her information on the church of San Cataldo in Palermo, in Sicily, which dates from the same period as the one in Taranto.

Here are a few further sources that might be of interest:

A report for the European Parliament on Taranto’s steel industry

A slide based presentation on mussel farming in Taranto

A link (in Italian) about the sirens of Taranto

A short piece about the Cathedral of San Cataldo

One of the many articles about the pollution in Taranto.

4 thoughts on “Day two in Puglia: a visit to Taranto – the city choked by steel”