The next stage of our journey is from Castellabate to Roccagloriosa in the south of Cilento.

We follow an autostrada that dives through the wilderness in long strides, with off-piste loops for roadworks. The further we travel the more unspoilt the valleys to either side.  Signs, baked by the summer heat, warn us about ice.

On the outskirts of Roccagloriosa in Cilento, Italy

It takes little more than an hour to reach Roccagloriosa.  Our route takes us through the small town and out the other side. 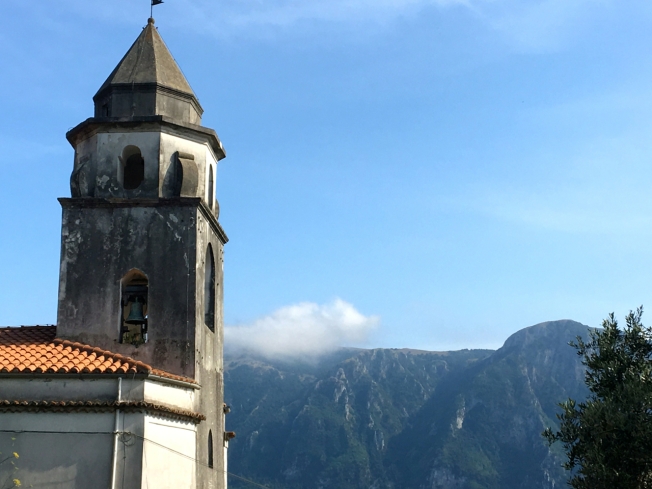 The church in Roccagloriosa in Cilento, Italy

The quiet streets are soon swallowed by countryside. At first the road through the olive groves is unblemished Tarmac, but soon its hard surface is replaced by rutted dirt. Our aged Alfa Romeo, with its loose undercarriage, takes the track at a cautious limp. 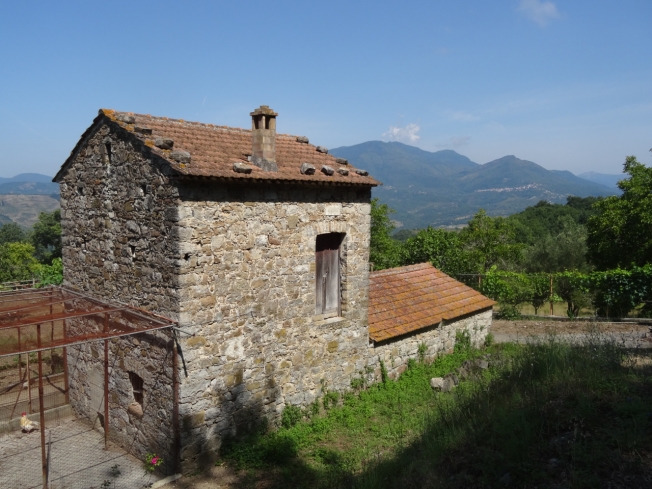 On the outskirts of Roccagloriosa in Cilento, Italy

It’s a relief to see the sign for our farmhouse bed and breakfast – Le Stelle di Giurò.

The spot, when we find it, is surrounded by wild woodland.  The owners, and an affectionate kitten, give us a warm welcome. 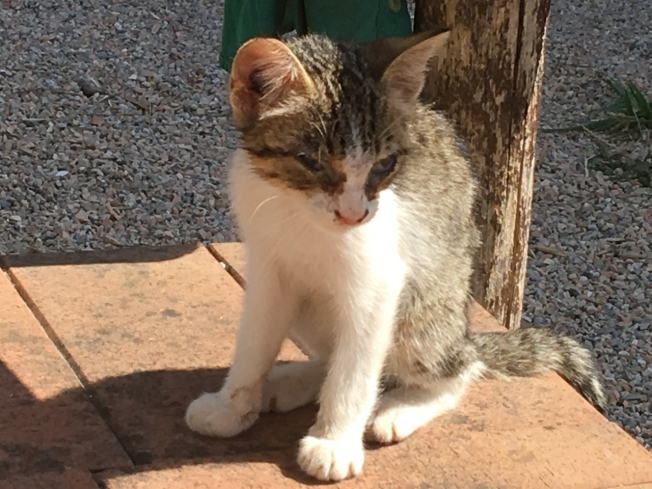 Supper that night, after coaxing the Alfa back up the rutted road to the town, is at Il Borgo in Roccagloriosa where tables are laid out in the piazza in front of the small trattoria.  We are the first to arrive but with the dark comes the locals. The long tables fill with families and generous plates of food as the heat soaks back into the sky, and the stars come out.  Nobody hurries …

View up a street near midnight in Roccagloriosa in Cilento, Italy

The meal over we stroll the cobbled streets past doorway cats, and the chat of neighbours outside for the cool.  It is nearly midnight and all is peaceful and still.

The next day after a comfortable night and a breakfast of delicious, freshly baked cakes and bread, eggs, ripe tomatoes, and coffee we turn back along the stilted roads towards Napoli.

The plan is not to stop … but then the old site of Velia turns out to be en route home.  We arrive just as the sun reaches the hottest part of the day. 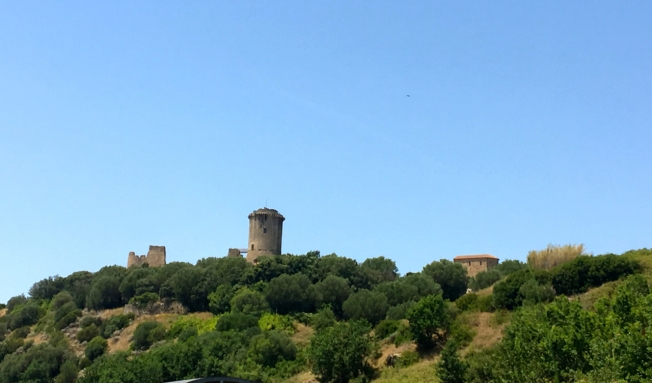 Shade is minimal, and the heat intense. It would be sensible to abandon the mission but there is something about Velia … about its position high on the ridge, and the fact that it’s around two and a half thousand years old … and, like Naples, its founders were Greek.

Detail from the archaeological site at Velia in Cilento, in the south of Italy

The Greeks brought their distinctive building techniques with them to Velia, and their schools of philosophy.

The views from the top of the ridge at Velia in Cilento, Italy

The old centre’s location is excellent. Elea (as the Greeks called it)/Velia (as the Romans called it), has views to the sea and to the mountains. 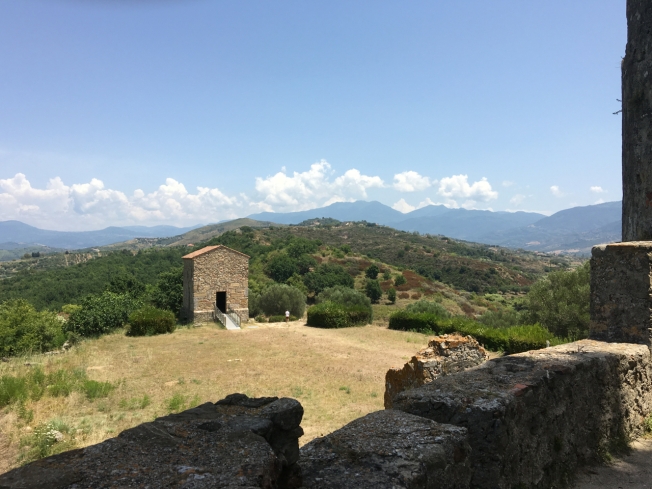 The views from the top of the ridge at Velia in Cilento, Italy

The buildings, whatever their age, are built with care.

Detail from the archaeological site at Velia in Cilento, in the south of Italy

Crowning it all is the site’s beautiful Greek arch. We trudge up the old road towards it.

The Via di Porta Rosa at the archaeological site of Velia in Cilento, Italy. This leads up to the arch (Porta Rosa).

It is worth the effort. The arch (named Porta Rosa, after the wife of the archaeologist who recently uncovered it) looks as good as new.

The Porta Rosa at the archaeological site of Velia in Cilento, Italy

It sits in a gorge at the top of the hill exactly as it has done since the second half of the fourth century BC. The only difference today is that it is now without the debris that buried it for many centuries.

The Porta Rosa in the archaeological site of Velia in Cilento, Italy. It was built in the fourth century BC and buried soon afterwards by some form of landslide. It was only rediscovered in 1964.

The rest of the site is a mix of Greek, Roman and medieval remains. Some of it is on top of the hill and some around the base. We decide, in a brain-sweat, to visit it all.

There are other groups of visitors but there is never a crowd.  Most of the time it is just us, as we work our way from shade to shade, water fountain to water fountain, civilisation to civilisation, and view to view.

Up at the acropolis, right at the top in the shelter of a medieval building, we discover one of ancient Greece’s most esteemed philosophers – Parmenides (who lived around 500 BC) – and we learned of another who also came from Elea, Parmenides’s pupil Zeno (490 – 435 BC).

Parmenides was born at Elea (the Romans changed the name to Velia). I have seen this quotation from his work translated into English as: “It is necessary to say and to think that What Is is; for it is to be, but nothing it is not.”

The display is clearly laid out and easy to understand, apart from the quotation. We struggle first with the translation and then with understanding … “It is necessary to say and to think that What Is is; for it is to be, but nothing it is not.” Parmenides was not one to make thought easy.

After a brief duel with the great thinker we make our way, still baffled, back down the hill to the car. We turn its nose towards Napoli, and the air-conditioning to maximum.

It’s not the quickest of drives but our heads are full.  We have memories of sea views and wild places, of goat bells amongst olive groves, and of deep thought in the ancient home town of the impossible philosopher – Parmenides.

It’s been worth every mile. 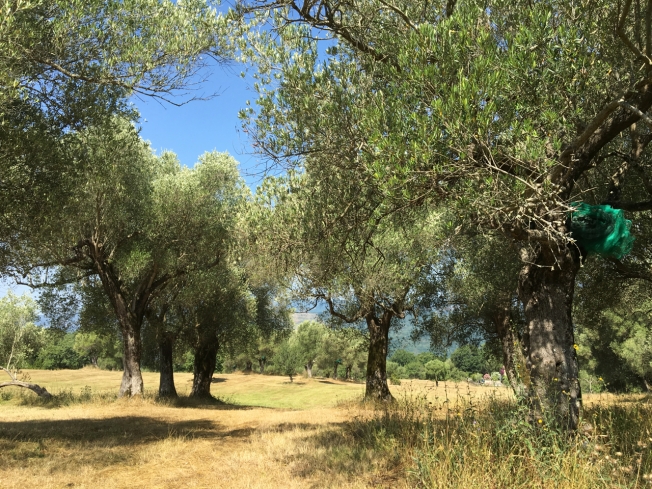 By Roccagloriosa, Cilento in Italy

4 thoughts on “Italy: Deep into Cilento and back, with a stop in Velia”