It is late November 2017, and I am with Barnaby Rogerson, author and expert on North Africa, whose latest book, In Search of Ancient North Africa – A History in Six Lives, has just been published.

This is the second part of our interview and the focus is on travel writing in general and on Eland, the publishing house where he is a director.

We are in the Eland hub – books are everywhere.

A corner of the Eland office in London

We discuss ways to communicate ideas.

“I like living history … I want to know what people want to know, and the history that’s in their mind, and in their sense of who they are.”

He has given “dozens, if not hundreds of talks” but is modest about his abilities: “Books,” he says, “are a better way to communicate.”

I ask what he looks for in an Eland book. He describes it as writing that explores an experience that most of us could never have:

“Normally, what we can’t do is, for example, to have a relationship with a Nepalese family for two years. We can all, potentially, get to the landscape now so what Eland looks for is that anthropology-light, engagement in a society … The books that we really love are sort of one-offs where someone has experienced or done something so extraordinary in their lives that they have to write it down. These books simply have to be written.”

He is proud of the Eland list. I ask him who the competition is. His reply is unhesitating:

“I think that Eland is certainly the world’s best and biggest travel list now, its most dedicated travel list.”

“A Square of Sky, by Janina David – about her experience as a young Jewish girl who survived by pretending to be a Catholic during the Nazi extermination of her people – is a book that had to be written. And there’s another by a young man who watched many of his fellow officers commit suicide under the stress of commanding Somali soldiers in the desert. It’s called Warriors.”

These books he says are “totally exceptional“.

“We are trying to back away from the idea of the author as hero. Very few of our books have a figure who is heroic through travelling. We are really only interested in people who no longer portray themselves as the central figure, but rather are interested in the community or experience that they have got to know. In the case of the community, it could well be the one that they have grown up in … we want the journey’s end, when they’ve found the place they want to be part of.”

Dervla Murphy, he says, is the most famous live author on the Eland list. He describes her memoir, Wheels within Wheels, about growing up in a small town in Northern Ireland, as probably her greatest literary work:

“a fantastic portrait … like a blessing … We like ‘spirit of place’ – that would be a way of putting it.”

Does Eland publish only travel literature? Barnaby Rogerson leans back in his chair to scan the shelves of Eland titles at the back of the room.

“We’ve got three biographies; two or three memoirs; a novel; a book written for children; …  and there are some things in there that are fiction but that just manage to ‘get’ a community, or a society.”

And some, he tells, me have come to them as suggestions from Eland readers – “a bit like a co-operative” he says with a grin.

I ask about translations – do they have any? No he assures me with confidence, and then hesitates:

“Nicholas Bouvier has been translated … but he is one of the greatest travel writers that the British have never heard about.”

The book, The Way of the World – Two men in a car from Geneva to the Khyber Pass, is about two bored, young, upper-middle-class males from a Swiss town, who drive East – not a natural choice for Eland he tells me. Then adds, with a cheerful flourish:

“But Bouvier has turned it into one of the greatest travel books of all time.”

He warms to the theme and suggests another book about a bored, middle-aged carer who decides to take a year out on a bicycle:

“That,” he says triumphantly, “is Full Tilt. The book is absolutely fantastic.“

He goes on, proud as a father:

“A Year in Marrakesh is by someone who had a near nervous breakdown having helped the partition of India, then goes to Marrakesh, and just chatters on about his six Moroccan neighbours for a year.”

His eyes shine as he thinks of the Eland books … then he shakes his head, happily:

“I couldn’t teach a travel writing course. There is no structure that I could recommend anybody to follow.”

Would he ever consider a book about a particular aspect of a culture … music perhaps? He fears that such a book would be too specialist:

“I never want an Eland to be a book that you couldn’t give to anybody who has got a reasonable command of English. We want people who can tell stories.”

I ask whether Eland sends drafts of its books off for scrutiny by higher authorities, books such as the wartime memoir Naples ’44.

My final question is to do with female writers. His response is instant and enthusiastic:

“Yes, some of our best writers are female. In the last year we have published three. Some of the best post-war coverage has been done by American women who have properly buried themselves in another culture.

The Warrior Herdsmen is by an American woman Martha Gellhorn, who then became a naturalised Briton.

Dinner of Herbs by Carla Grissmann, a heroic American woman who ended up protecting the museum in Kabul in the Taliban years. She is an amazing woman – the sort of American woman who has travelled the world, and coped with it, and then settled down to get to know a community.”

This is where the interview ends, but the enthusiasm does not.

Before I leave, we discuss the Eland Christmas catalogue with reference to three particular readers. He asks for reader profiles, then selects three titles from the book stacks around him, and gives them to me:

I plan, if I can get my hands on them, to review them all … at some point.

“Martha Gellhorn was the voice of that liberal, that “great generation” who were as brave as they were committed…she became a naturalised Briton at the end of her life, but was born beside the Mississipi in St Louis. We have added her two collections of peacetime and wartime reportage, The Face of War and The View from the Ground to the Eland list…

Elizabeth Marshall Thomas is another American travel writer of whom I am in awe. She writes with a clarity and nobility about the cattle herdsmen of Northern Uganda which I don’t think any British man, woman or child could have matched…”)

My thanks to Barnaby Rogerson for his time, and to Steph Allen for her help in arranging the interview.

Some links for further information: 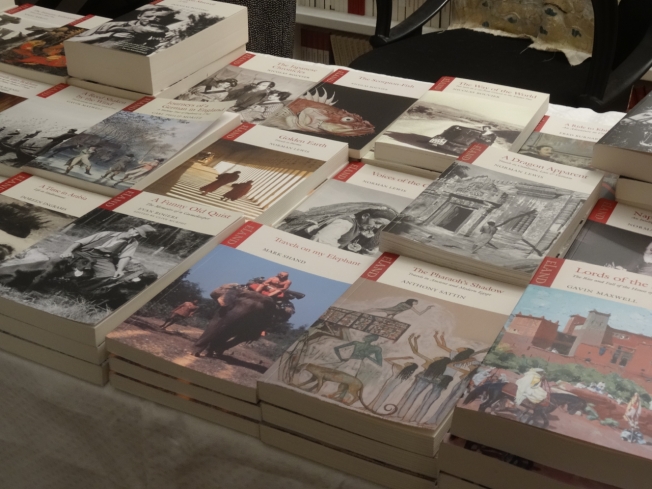 Eland books photographed at the Eland Open Day in December 2017

A little stillness in the turmoil . #stillness #intheloss #thephraser