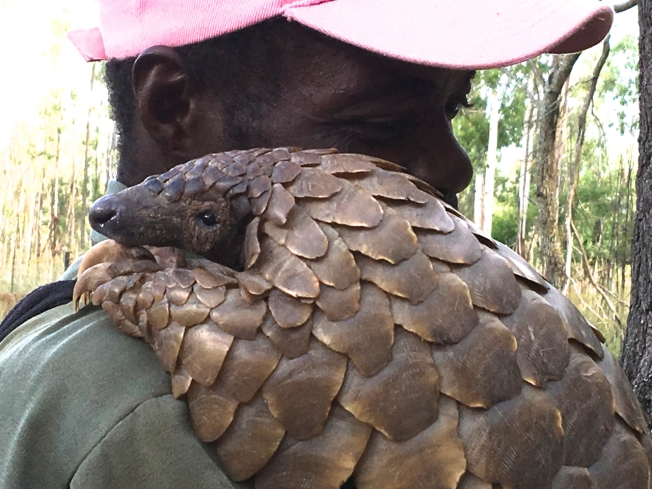 A pangolin in Zimbabwe with its handler/protector

The pangolin, or scaly anteater – legendary, gentle, and about to disappear. 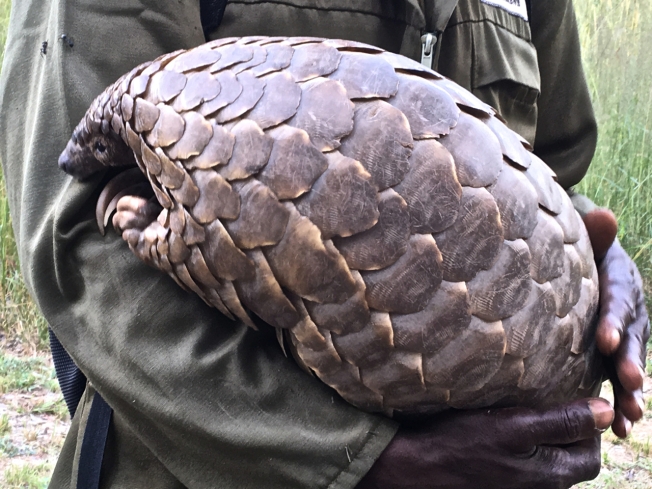 Covered in overlapping scales the pangolin looks tough, hard-as-nails when it rolls itself into a ball, but it is in real trouble. Why?

Two reasons: its meat and its suit of scales.

Some prefer the pangolin whole, for live slaughter at the dinner table, others prefer the ancient creature in variously prepared chunks – anything from a foetus, to just the scales, to only its extraordinary tongue. And there’s nothing the pangolin can do about it. Its size only ranges from football when curled, to bollard when stretched out, it has tiny legs and a long, thin, sticky tongue…and no teeth.

Officially the trade in pangolin is illegal around the world, but the market would appear to be limitless and difficult to staunch.

In all there are eight different species of pangolin in the world – four in Asia, and four in Africa – with the pressure now shifted from the collapsed Asian population to its African cousins.

So grave is the threat that the International Union for Conservation of Nature (IUCN) considers all eight species to be threatened with extinction, with two species, the Sunda and Chinese pangolin, given the extreme listing of critically endangered. A vivid flare, but still the great containers full of pangolin ship to and fro.

The evidence is in the finds. Here is a list of a few of the containers discovered since December 2017:

The total weight of these shipments alone was well over 20 tons, equal to thousands of pangolin. This then raises the real alarm – how much has not been found?

To make it worse there is little chance of successful breeding programmes as pangolin usually die in captivity.

That leaves just one option – to spread the word, to drastically increase our awareness of, and our respect for, the living pangolin.

Traditionally the people of Zimbabwe have revered the animal for generations. They consider the sighting of a pangolin to be a good omen, such a miracle in fact that the only reason to touch one should be to present it alive as a gift of exceptional significance to a leader or chief.

At least that’s how it used to be. Now, even Zimbabwe’s pangolins are trafficked around the world.

Can there be a more urgent time for us all to protect this mythical mammal – this message from our gods and ancestors?

There are three short clips below of pangolins in Zimbabwe. The first two clips belong to me and were filmed at Wild is Life in Zimbabwe in 2017, and the third was filmed professionally at the Tikki Hywood Trust, also in Zimbabwe.

Below the videos are links for further information, including one to a publication “Underdevelopment, development, and the future of Africa” edited by Munyaradzi Mawere and published by Langaa Research and Publishing which has a whole chapter on the importance of the pangolin.

A link to extracts on the pangolin from “Underdevelopment, development, and the future of Africa” edited by Munyaradzi Mawere and published by Langaa Research and Publishing

A report by the International Union for the Conservation of Nature (IUCN) on a pangolin workshop held in Cambridge, England over three days in August 2018

A 2018 University of Stirling report into the global pangolin trade

A 2018 Daily News report on World Pangolin Day in Zimbabwe

8 thoughts on “The pangolin – still here but only just”