Flying into Prague over the Vltava River

This is our first visit to a city we know of but do not know, and we have just one October weekend to make its acquaintance.

The Vltava River is the eye-catcher as we fly in.

The journey into the city from the airport, via bus and underground, is clean and efficient, and takes us swiftly into modern Prague. We find the old centre a few streets further on. 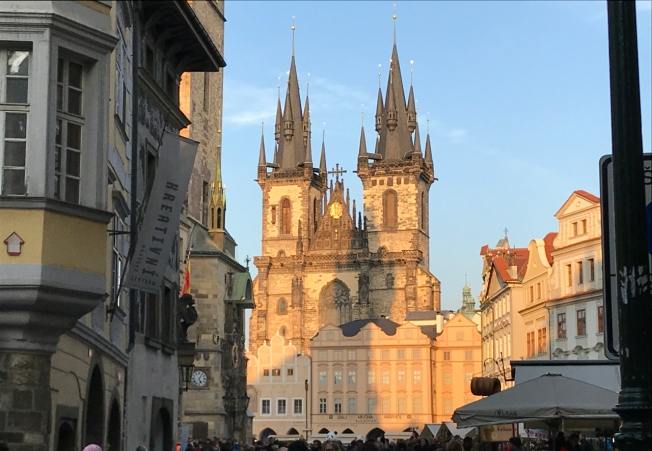 The old centre of Prague

Here the urban peels away into reds and golds around an old cobblestone square – wide  and lovely…and packed with people.

We pass beyond the crowds into a small side street with a vegetarian restaurant, where the locals have come for lunch. Our table reminds us that we are a long way from London. 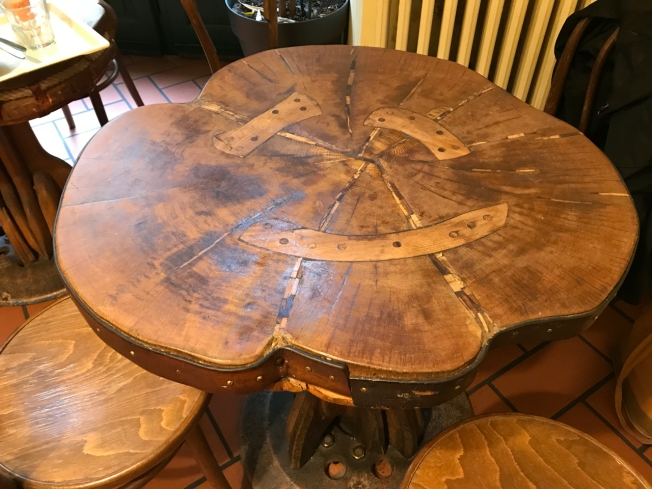 We spend the afternoon exploring the streets, and see several billboards that announce that the weekend is dedicated to celebration of the 100th anniversary of the founding of Czechoslovakia. This is news to us, but clearly not to many in the crowds who seem to be from the local region.

The last of the sun, and the scent of cinnamon sugar draw us into the Jewish Quarter (Josefov) where cones of pastry, trdelnik, turn on a grill. We choose two, which are dusted again in sugar then filled with soft ice-cream. They are warm and delicious…but not easy to eat when trying to concentrate on the Golem story in the shop a little further along.

In parts the city is crushed with crowds, and in others it is empty, but everywhere there is a scattering of reminders about the weekend’s anniversary.

Our history shaky, we ask in restaurants and shops why the anniversary is being celebrated in ‘Czechia‘. The responses, all in English, are mixed and the enthusiasm muted with one muttering about freemasons, and others about tourists.

None the wiser, but more than happy with the bonus events, we wander on through the weekend of brooding stone and flouncing pastel facades. 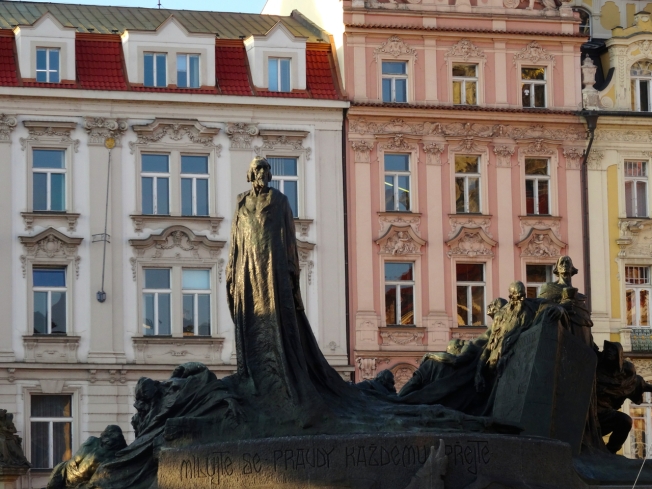 The grand and stately Charles Bridge is packed with umbrellas and stories of saints, beheadings and tragedies. 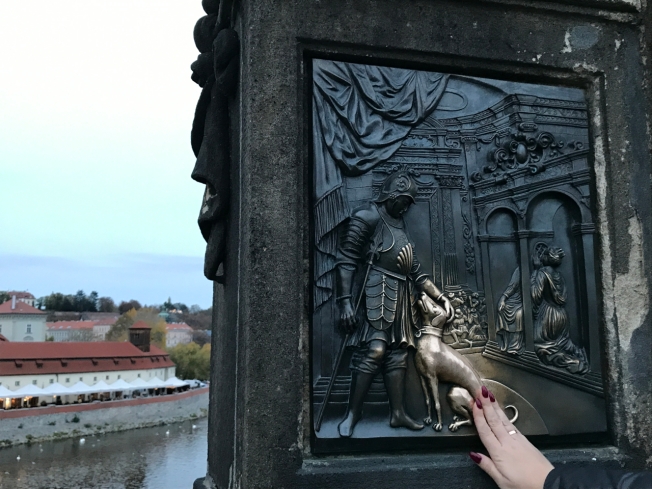 …a touch of kindness before the castle gates themselves.

The gates to Prague Castle

The day we cross over the bridge and make our way up to the castle we don’t stay long, or go in…it’s cold and wet for one thing and there is plenty of Prague still to see, including these two who we meet on the way down. 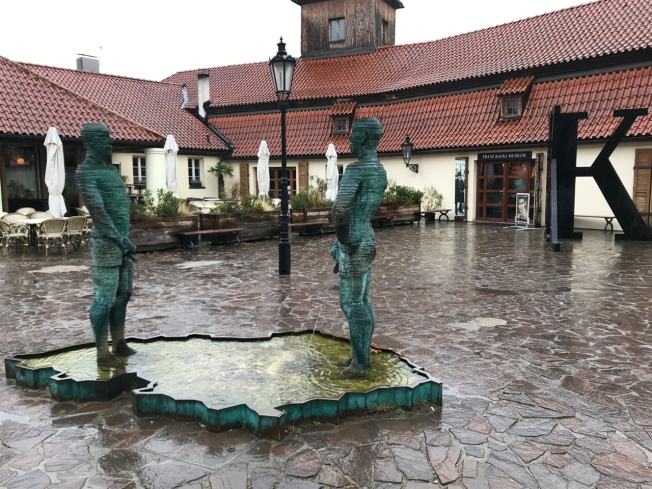 Czech sculptor’s work ‘Proudy’ outside the Kafka Museum in Prague

They are the stars of David Cerny’s ‘Proudy‘ sculpture outside the Kafka Museum. The main feature of the piece, as bizarre as the castle gates are brutal, is that the two bronze men who pee on to a map of Czechia are apparently able to spell out messages as they do so. When we spot them it is so wet that their strange ability is hard to appreciate.

More familiar are the recently restored terraces of the castle gardens.

The Gardens below Prague Castle

A plaque tells us that their restoration, which started in 1989, was funded by the Czech State with: “contributions from the Prague Heritage Fund under the patronage of HRH The Prince of Wales and the President of the Czech Republic Vaclav Havel.”

The Gardens below Prague Castle

The gardens are lovely, and so is the fast-flowing river below with its birds and wildlife.

The Vltava River looking across to Charles Bridge in Prague

I do not expect to see my first ever beaver right next to the Charles Bridge, one of the busiest points in Prague.

Eurasian beaver in the Vltava River in Prague

Beavers aren’t the only surprise in the city.

On an innocent stroll through an ordinary suburb the ladies below suddenly appear on the skyline.

Not even the Internet, in English anyway, can explain why they are there.

The Internet does tell us though about the lion we meet in an open area close to the river. 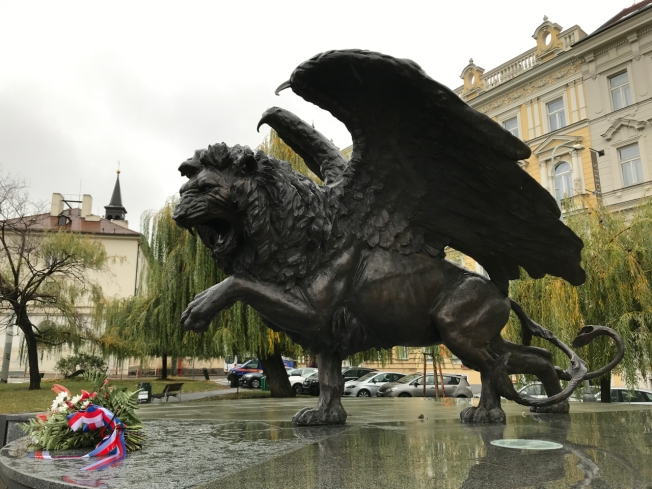 Recently unveiled, he is a memorial to pilots who served in the Second World War. 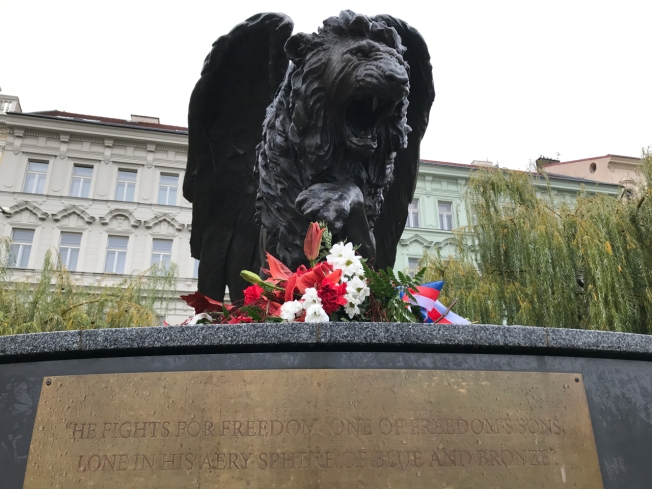 There are other reminders of the Second World War in the form of large message boards beside the main paths in a park above the Vltava. We come across them on a late evening stroll, where the darkness highlights their remembrance of suffering. 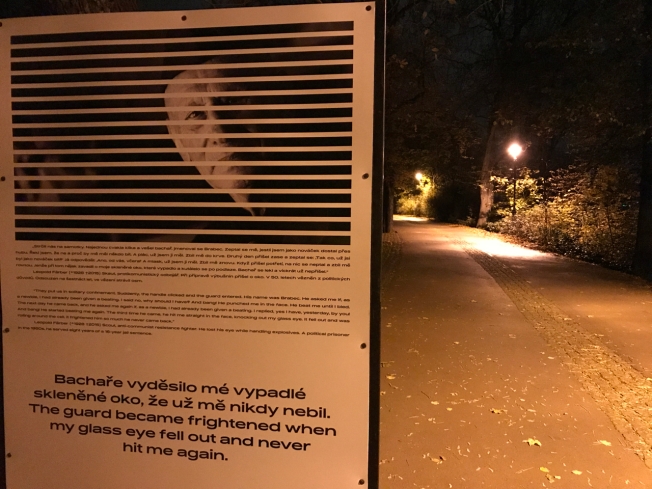 They are like ghosts, and Prague feels full of ghosts behind its almost-smile. 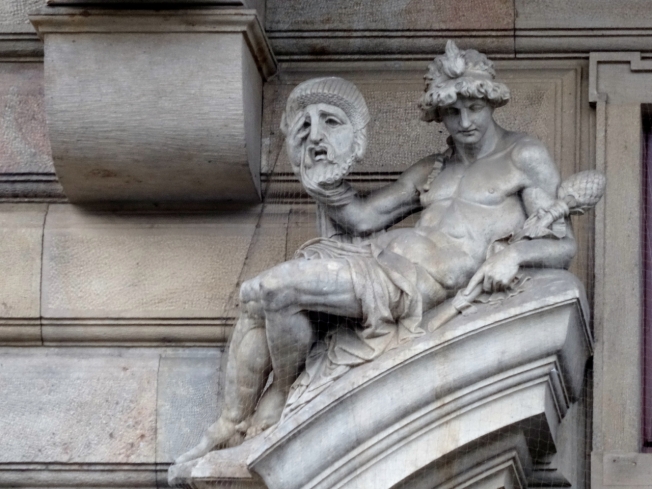 She is moody and beautiful…bright in parts… 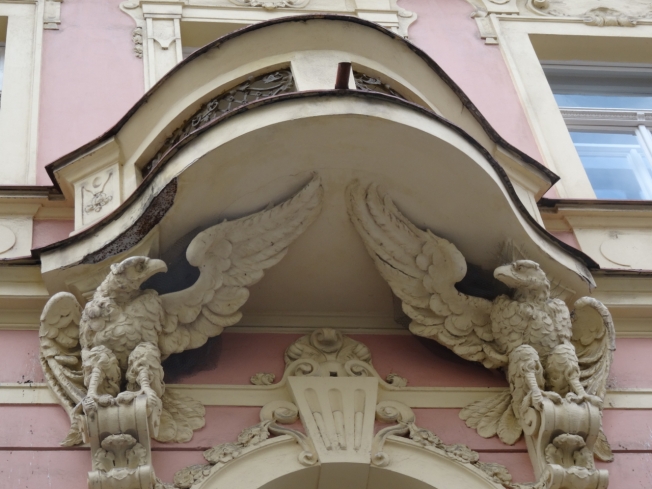 …and fond of a joke or two.

Museums? We never manage to visit any, nor to squeeze in any concerts, but we do eat well in between.

There are bakeries and restaurants throughout the old centre, and we are not disappointed in any that we try.

In fact they are such a pleasure that by the time we leave Prague we are fattened and footsore…and we’ve hardly begun.

Prague celebrates the 100 years since the founding of Czechoslovakia