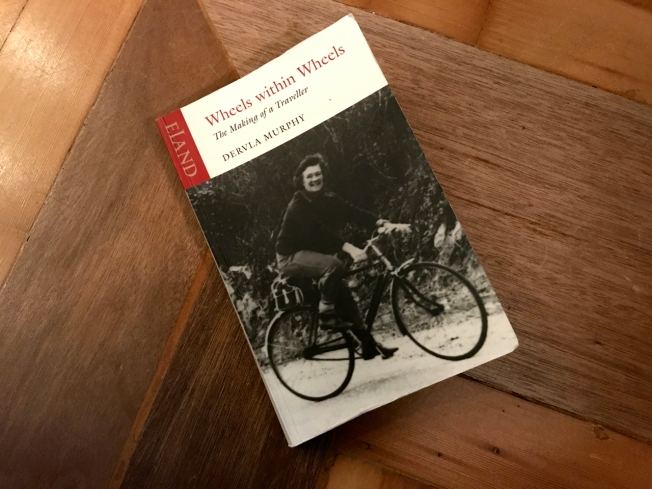 Wheels within Wheels – The Making of a Traveller by Dervla Murphy

I bought this book a while back and then left it sitting in the bottom of a drawer. Bad idea. If there’s anyone who shouldn’t be shut away, it’s Dervla Murphy.

She flew out of the pages.

I bumped into Dervla Murphy herself at a book launch in London a few years ago. Plenty of travel writers in the room and I’d heard of Dervla’s amazing solo travels on a bicycle but I’d never met her, or read her books, and did not expect to see her there. But there she was, all the way from Ireland, and I couldn’t find a single word to say. What do you say to someone who is so well lived and loved, and so evidently connected to the core of life?

Sad to have missed that chance, but at least it spurred me on to buy one of her books. The book, Wheels within Wheels, is the first of hers that I’ve owned, and it starts at the very beginning:

“It’s a daughter you have. Came at quarter to twelve. Strong child.”

Dervla Murphy wrote Wheels within Wheels in the 1970s, when she was nearing the end of her forties. At this stage she was already a published author with several successful travel books to her name, including Full Tilt. She knew how to see, and how to tell others what she saw.

In Wheels within Wheels Dervla, an only child, takes us on a tour around her first thirty years of life, and introduces us to the family, the friendships, and the location that shaped her. The book begins with her parents:

“At 7.45 on the morning of Novermber 28, 1931, a young woman in the first stage of labour was handed by her husband into Lismore’s only hackney-car.”

It ends with her parents:

“And so, on that sunny June day by the duckponds, the acceptance of my first book seemed less a personal triumph than the fulfillment of an obligation to my parents.”

And it is written in her mother’s bedroom:

“I write on the spot where she died.

Love leaves calm. Even when circumstances have given it the semblance of hate, this is so. In the tangled relationships between my parents and myself love was often abused, denied, misdirected, thwarted, exploited and outwardly debased. But it existed, and it left calm.”

It is these ‘circumstances’ that Dervla explores in Wheels within Wheels, showing us how love and friendship pulled her through, with plenty of the fresh outdoors and piles of books.

Her mother was from a Scottish Presbyterian background, and her father from a long line of Dublin republicans. Neither of the parents had much money, nor were they local to Lismore, the town where Dervla was born, grew up, and still lives to this day.

“I grew up fond of both families, unquestioningly accepting their covert mutual hostility as a fact of Irish life.”

We meet many of the family as she powers through early childhood into adolescence. The tale is so vigorous that it’s easy to forget that throughout these years her invalid mother was in the background, completely crippled by arthritis by the time of her daughter’s third birthday.

“I cannot remember worrying even slightly about my parents. They wrote regularly and cheerfully, and I, seeing no reason why they should not martyr themselves for my benefit, continued to enjoy life immensely.”

Not a second wasted…until suddenly it all changes. Dervla is fourteen, and at home for Christmas, when she and her parents decide that she must leave school to care for her mother. Her mother’s dependancy increases from chapter to chapter, but Dervla is happy, at least until the age of seventeen:

“At any season a walk or a cycle aroused almost unbearable delight. Apparently I was missing a lot; yet I desired, during those years, no more than I had.”

Life is difficult for the Murphy family, and as the situation deteriorates Dervla becomes essential to her parents’ survival. We are with her as the walls close in but she never asks for our pity…she survives and she is thankful.

There is terrible suffering of course, and it intensifies, but it is laid out for analysis rather than wallowed in, and even though we are taken into the tunnel Dervla keeps her focus firmly on the light.

I love this book, and its exploration of Lismore and the growing freedom of its fearless traveller. It’s like being taken on a powerful pedal around the modern concept of ‘mindfulness’, without any of the mystery the word implies, and by a book that probably never meant to do anything of the sort in the first place.

“At the age of thirty I had not yet possessed anything but the minimum of clothes, the maximum of books, and a bicycle.”

Towards the end we do travel a little more, but Dervla always comes back to where she began, even after reaching New Delhi…and we know it will not be long before she is off again.

“I was not really made of languishing material…”

Thank you Dervla Murphy. May we all ‘languish’ less.

Here are two further links with more about Dervla Murphy.

2 thoughts on “Review: Wheels within Wheels – The Making of a Traveller by Dervla Murphy”