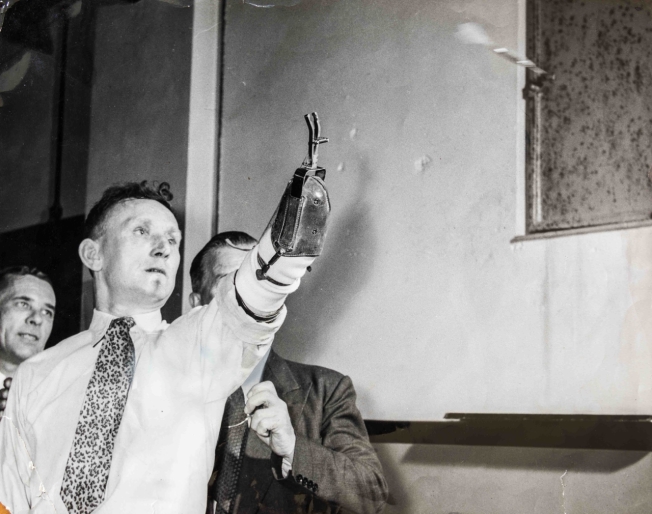 A query landed on The Phraser, linked to a piece I wrote seven years ago about an organisation that supports blind veterans.

No, I thought when I read the question. Surely not.

Then I thought again. If I’ve learnt one thing it’s that you should never underestimate an old soldier. 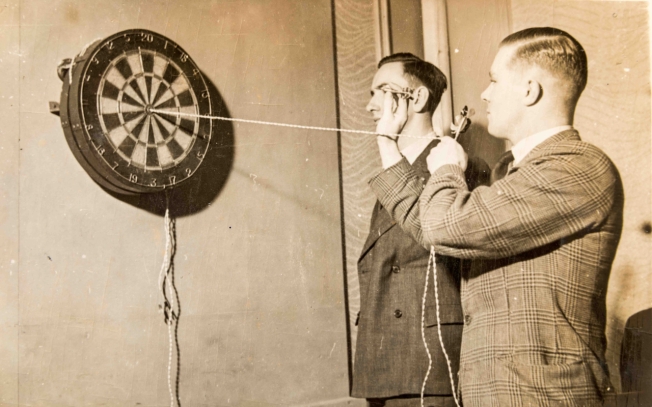 “During my time in Manchester I heard tell of a DART TEAM which actually played the game in pubs about the city. They apparently stuck a pin into the bullseye and threw from the line and were very accurate! I have no cause to doubt this as a few members of the M/car Fire Brigade with whom I served spoke of this many times. Can you please confirm this.
Antony Conway, retired Chief Fire Officer, Hong Kong”

This was the question that sparked the search. I started at Blind Veterans UK (who carry on the work begun by St Dunstan’s during the First World War). 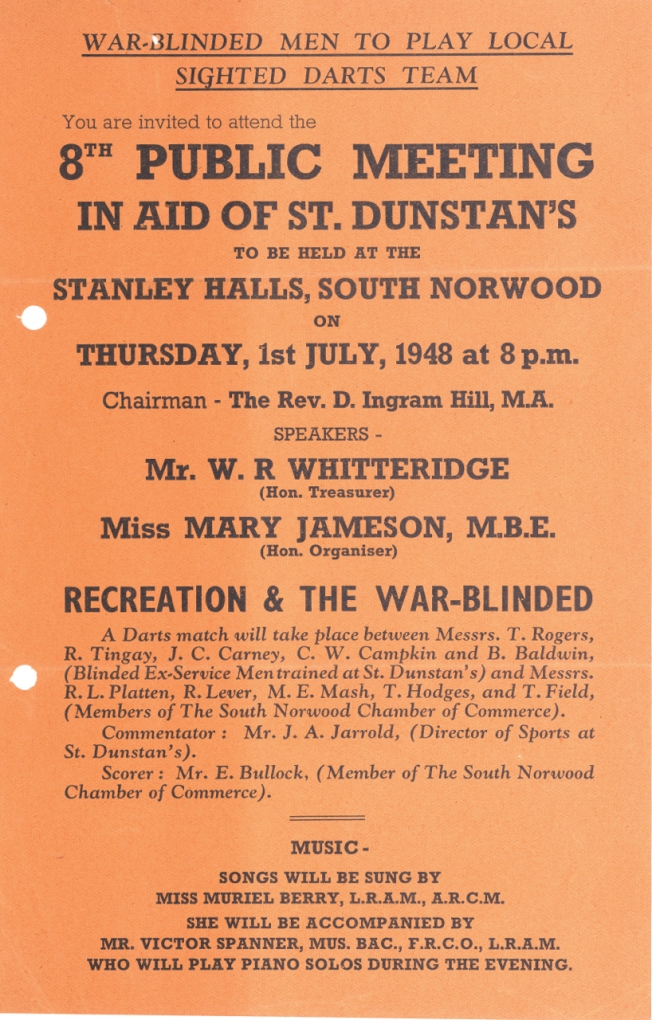 Poster advertising a fund-raising darts match in aid of, and including, ‘war-blinded veterans’ from St Dunstan’s (thanks to the archives at Blind Veterans UK for the image)

They searched through their archives for some answers, and then sent across what they’d found.

It seems there were a number of St Dunstaners who played darts, and one of their most successful fundraising teams was the St Dunstan’s Four, founded towards the end of 1945 by Mr Harry Allen who was then chairman of the West Islington Darts Team.

There’s a short video at the end of this piece that shows Joe Hitchcock in action. He looks like a William Tell of darts, and his skin-skimming acts, plus the abilities of the blind players, raised thousands for St Dunstan’s.

“Originally Harry Allen had assumed that the Four’s activities would be restricted to London, but such was the enthusiasm of licensees and supporters of the Four that the exhibitions soon became known countrywide and their travels took them to all parts of England, Scotland and Wales.”             (by Darts Researcher Patrick Chaplin)

The Four may have reached Manchester as well, although they were not the only blind darts players out and about – there were others from St Dunstan’s who played in pubs and competitions around the country. 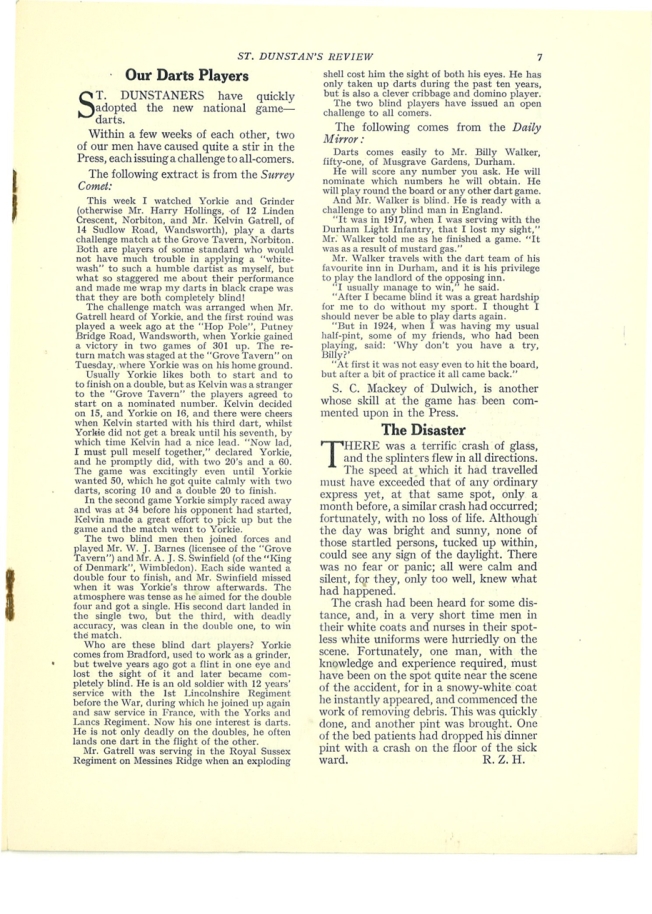 I then did a little more searching to see if I could find out why darts and St Dunstan’s were linked in the first place, as it’s strange to me that an organisation for the blind should be able to field teams in a game that needs such accuracy.

Timing might be part of the answer, as darts reached the mainstream a few years before the start of the First World War, and then it got more and more popular.

1908 was a good year because that was when it became a legal pub game – before that it was considered too dangerous. It’s thought that this change in the law was thanks to Jim Garside, a landlord from Leeds, who was summoned to appear for allowing the game on his premises. Apparently he took a dartboard with him, and his best player whose talent proved that it was a game of skill, not chance, which supported his argument that it shouldn’t be banned in pubs. The court agreed.

After that the game took off, and the war-wounded of St Dunstan’s were on that wave.

I’m sure there’s more out there about veterans and darts, but that is all I can find for now.

So, in answer to Antony Conway’s query, a team of blind darts players probably did play in Manchester, and they may well have used a line pinned to the bullseye to improve their accuracy. There may still be teams playing there now.

Thanks for the question. If anybody has any other information they’d like to pass on please let me know. 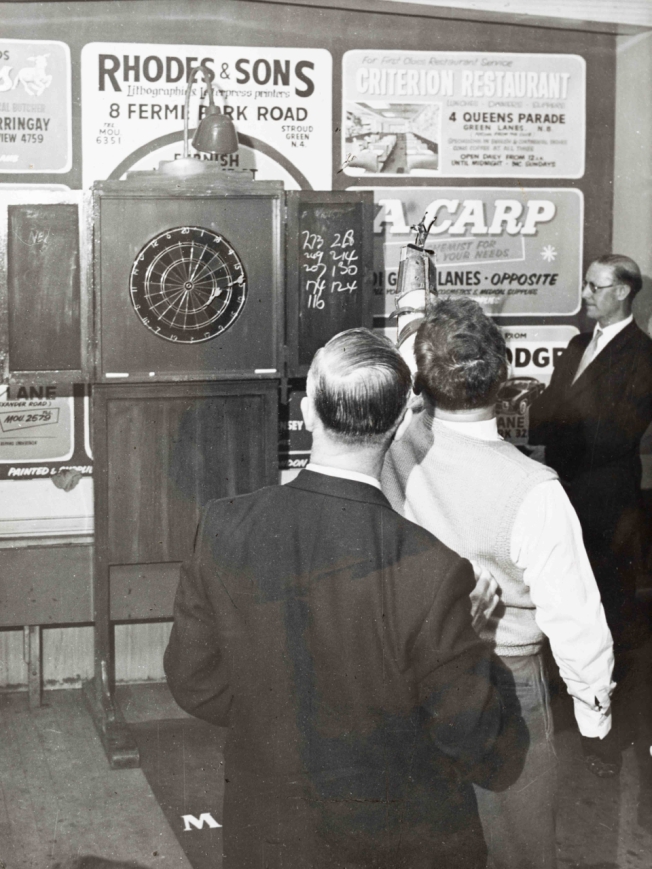 My thanks to Blind Veterans UK for the images and information they sent to me after my intial query; to Patrick Chaplin for the research material he has made available online; and to Antony Conway, Retired Chief Fire Officer, Hong Kong for his query.