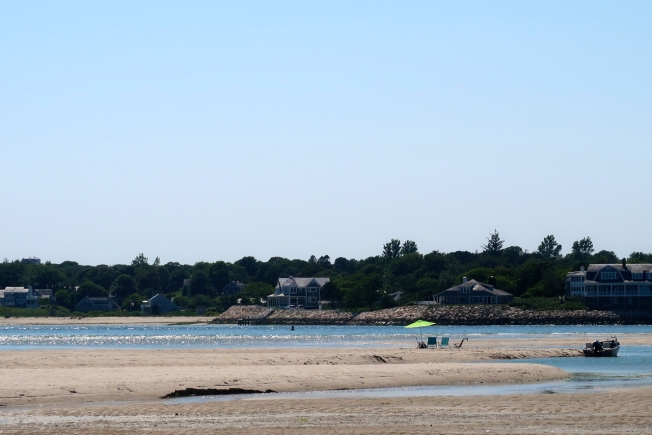 The little boat – metal hull, room for four, and a fine engine – edges out past the sport fishing boats in the harbour to the curves that stretch beyond.

Here, the ‘no wake‘ signs behind us, we accelerate on towards the pale line of the Cape Cod National Seashore. 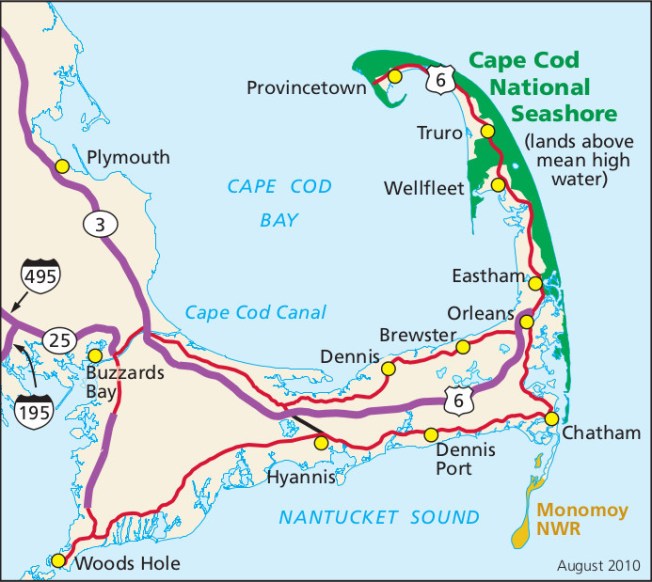 Our base was Orleans, in the elbow, and at one end of the Cape Cod National Seashore

This is our first visit to Cape Cod to stay with friends who have a house in Orleans. Today we’re off for a picnic, with a detour to see the seals.

It’s not just a few seals but thick, gleaming rugs of them that laze out across two sandbanks. As we get closer we hear their barks, squashed into a strange wash of sound. We cut the engine.

“The seals are safe here. The sharks won’t come in this side and the waters are too shallow for most boats.” 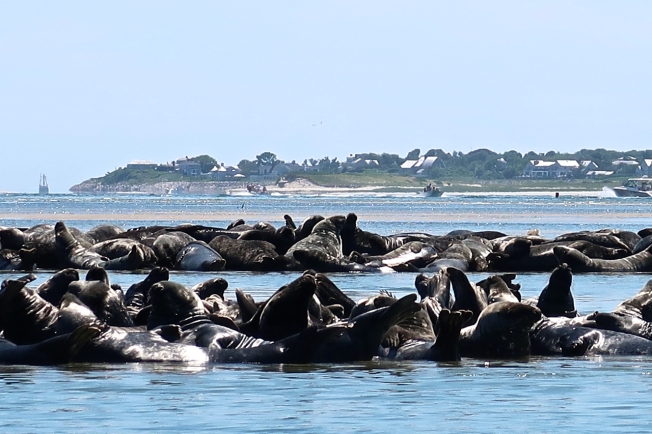 The closer we get the louder the seals sound as they flop for space, with those who don’t fit left to watch the visitors. 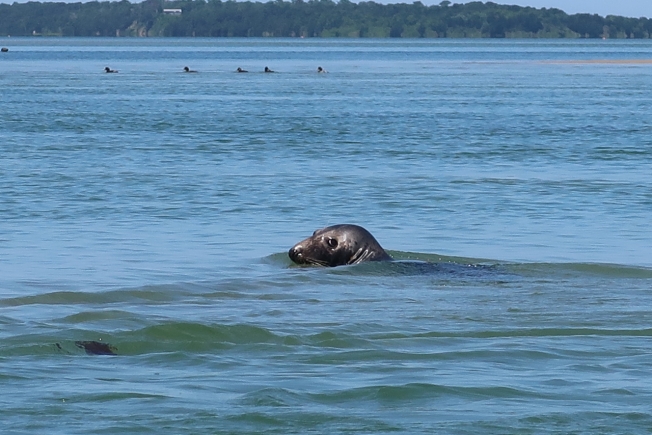 We watch each other a little longer then we scrape back out over the sandbanks to search for our own stretch of beach.

Below us, in the shallows, lie the dark dinnerplate helmets of horseshoe crabs. They lurk unbothered, like watchmen from a time before time. 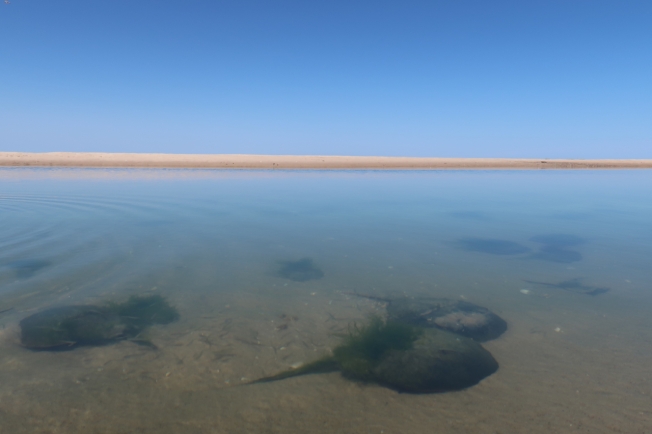 Horseshoe crabs have been around for more than 300 million years

We anchor next to them and I tiptoe cautiously past. Who knows what they know? 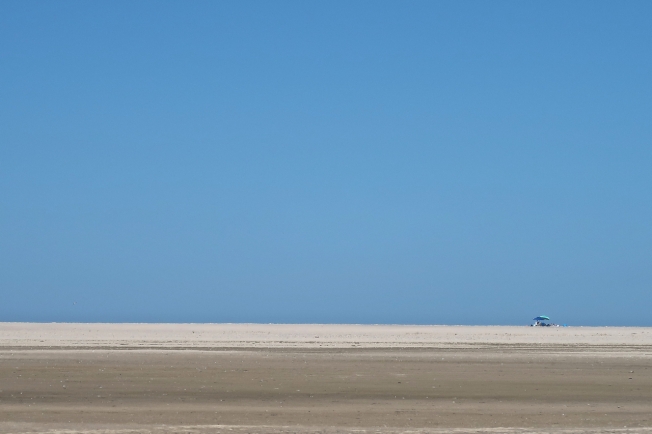 We raise our umbrella against the blazing blue, and picnic slowly. It is hard to believe we’re in America.

Later, with the sun high and the sand hot, we entrust our beach kingdom to the crabs and trek across the Cape Cod National Seashore to see the real ocean. 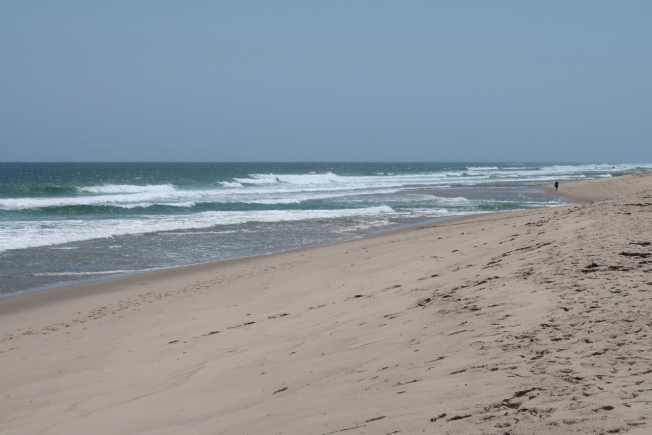 It’s not far, but the sand with its crushed shells burns our bare feet, until we meet the winds and ocean on the far side of the dunes.

This is an eastern edge of America … we’re not the first European visitors but it feels like we might be. There is hardly anyone else here – just us, the silky heads of occasional seal, and the buzz of an aircraft checking for sharks.

“Kennedy saved this in the 1960s – made it a protected area … President JFK. The family have a home on Cape Cod.”

We circle around the breeding birds, protected by roped off areas on the dunes:

“We have piping plovers here and I think they’re getting scarce.” 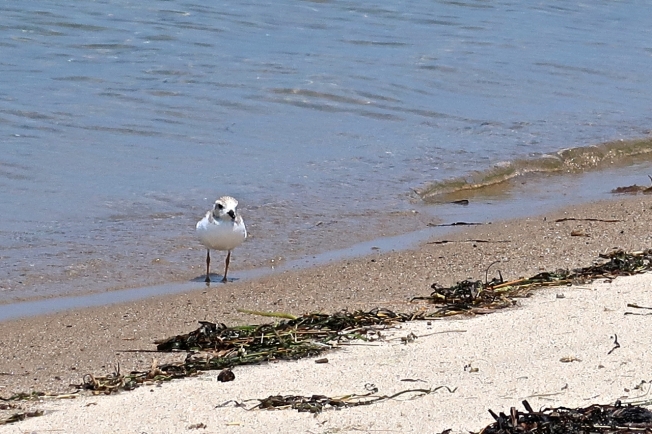 It is a beautiful stretch of seashore – no trash, no highrises, no noise – just the ocean sands, and an empty horizon.

In the late afternoon, when the sea closes in on our umbrella, we lift anchor and head back to harbour, past cormorants with their wings pegged out to dry. 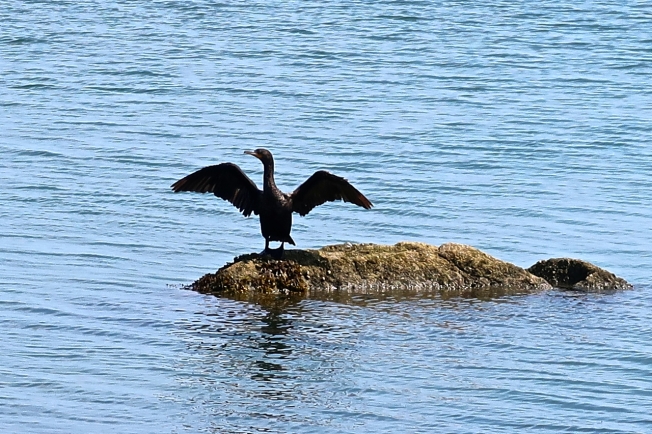 Our base for the remaining days is a house in the woods, in the elbow of Cape Cod. There are only two problems – squadrons of mosquitoes outside when night falls … and poison ivy. 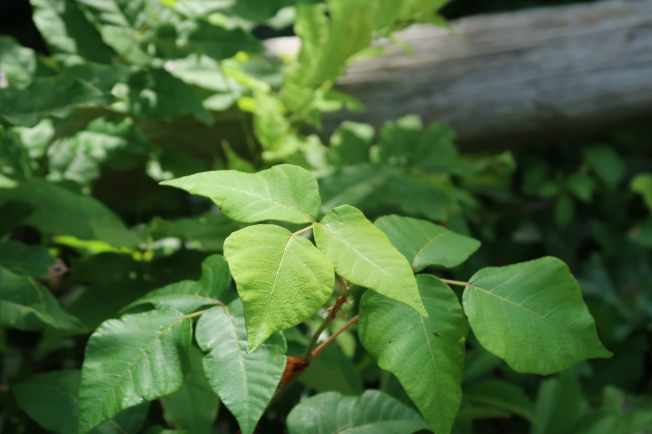 Thankfully a well-screened house protects us from the mosquitoes, and we’re taught how to watch for poison ivy.

The roads are a little simpler … and clearly signed. 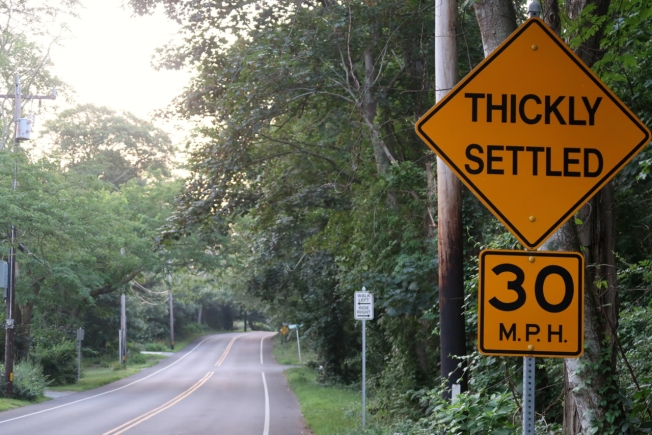 ‘Thickly Settled‘ sounds dense but Orleans doesn’t seem that way – it is quiet with large gardens, old homes and American flags. There are runners and beach queues on some roads, and shoppers in the town, but not much sign of the neighbours in our part of the suburbs … just the calls of a Carolina wren and a big dog, with occasional visits from cottontail rabbits, catbirds, and a few turkeys. 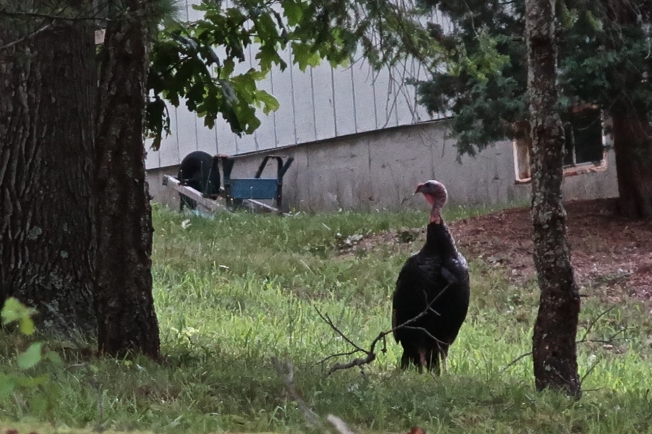 Inland there are freshwater lakes that we walk around, swim across, and bike to. 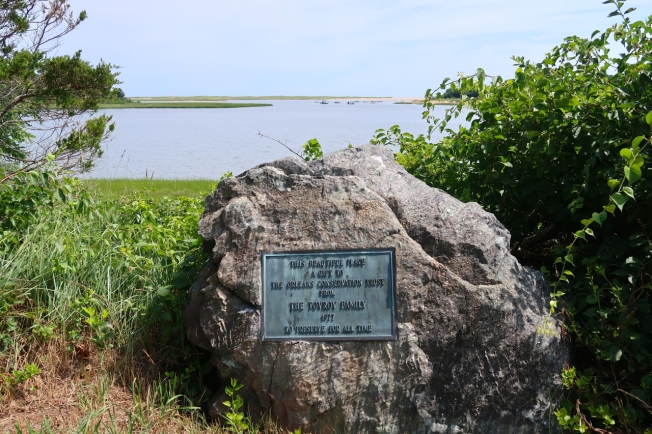 Our big bike ride is to Sheep Pond. The trail looks easy, but we ride it in early afternoon, in humidity that piles over us like towels in a sauna. 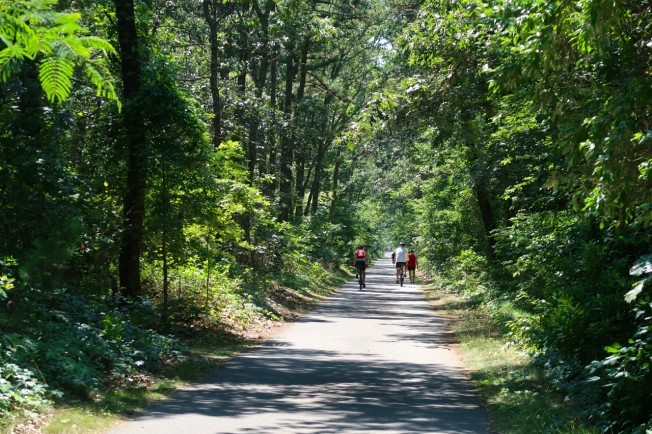 The trees do their best but even their shade can’t block the heat. 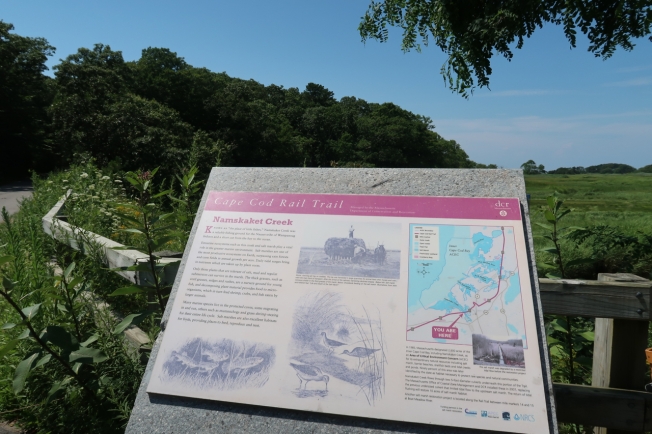 Our prize for keeping on is the blue-green cool of the ‘pond’ at the turnaround point. There are wild blueberries and nesting birds on the far shore, and the water feels like silk … then we have to ride back. 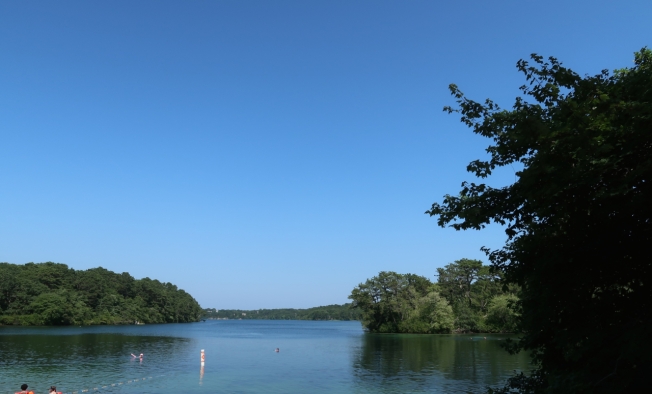 The heat is still there, but now it only adds to the pleasure of knowing the freshwater cool in one direction, and the miles of pristine beach in the other.

For us, the irresistible beach is Nauset. 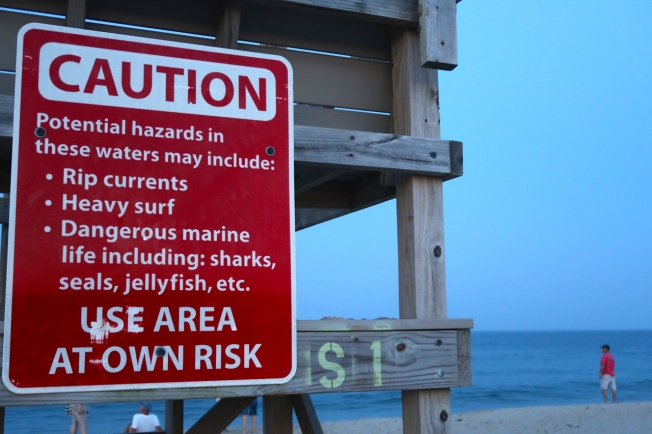 We visit in the evening … 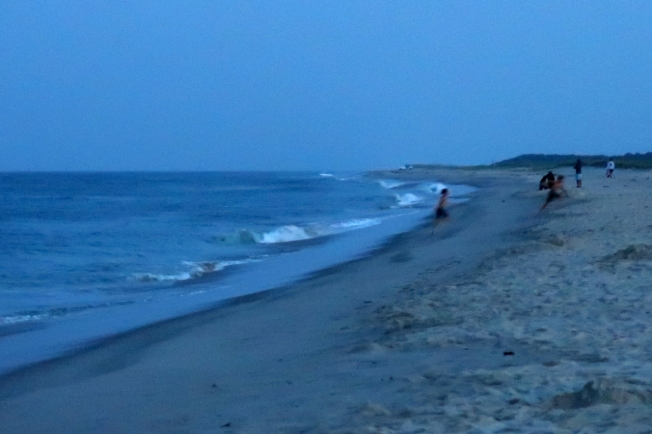 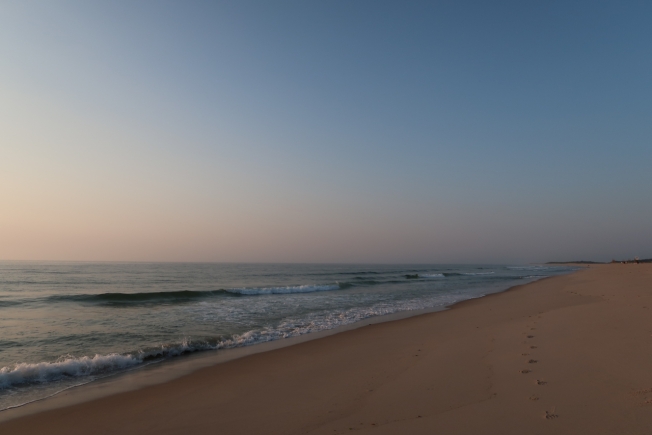 … and we try to catch fish. 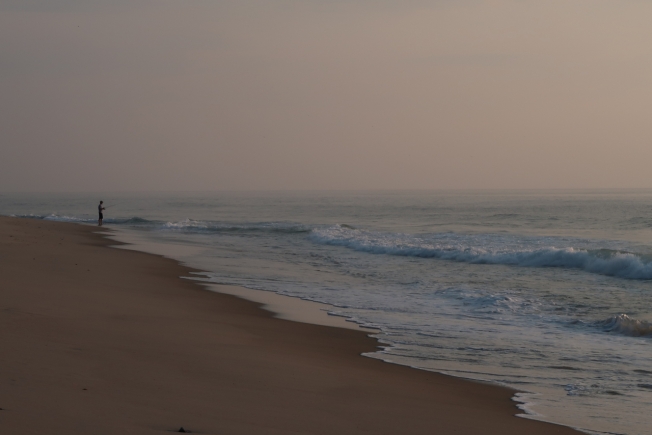 Fisherman in the early morning on Nauset Beach, Cape Cod

A different beach, Rock Harbor, is on the opposite coastal edge of Orleans.

Rock Harbor is small and popular, with only a seawall between its handkerchief beach, and the to and fro of small boats. 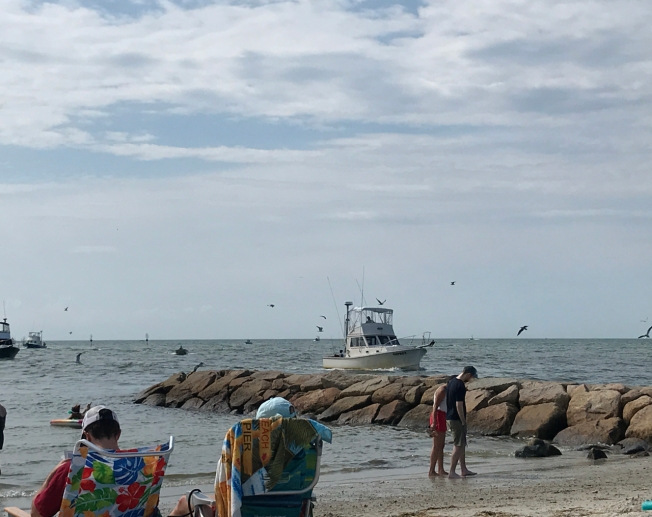 We spend an afternoon on its sands, and watch the world and its tides come and go. 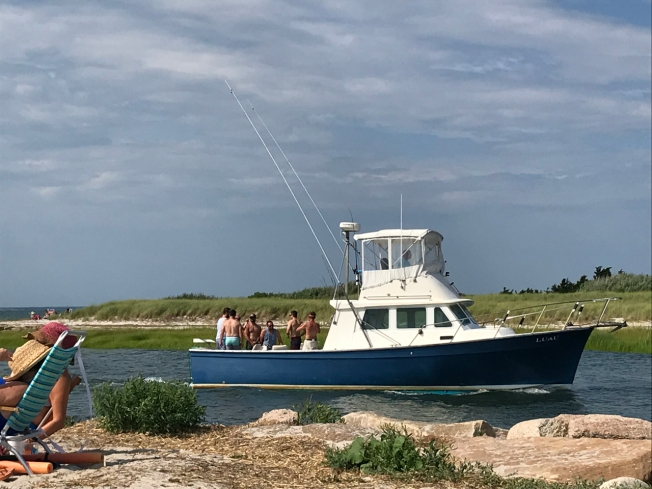 Wellfleet is further towards the curled tip of Cape Cod, and is full of art galleries and fish.

We arrive in time for iced plates of fresh seafood, and live music from The Rip It Ups in the harbourside Pearl, crowded with enthusiasts. 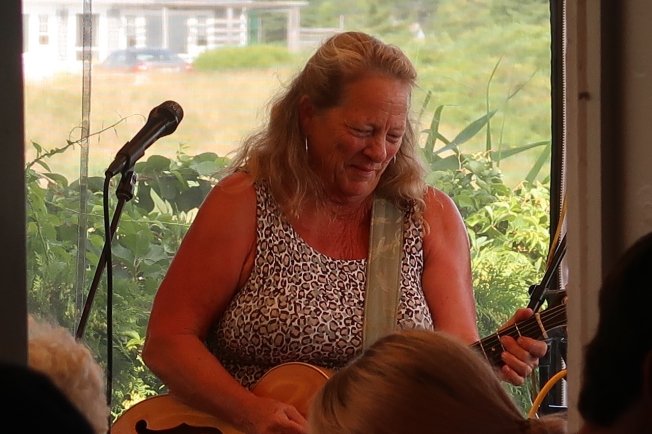 Jodi BIrchall lead singer of The Rip It Ups in the Pearl in Wellfleet, Cape Cod

It feels a long way from the world’s troubles. 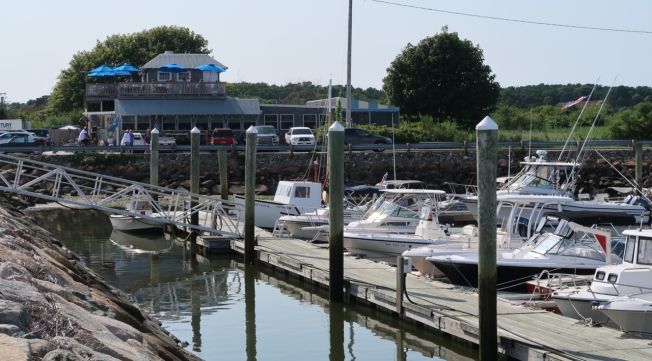 Our final stop of the ten days is in Province Town, on the very tip of Cape Cod. It’s on our way home and we have just a few hours in the arty, gender diverse town – a fancy, firecracker of a place after the one-eye open, drowse of Orleans. 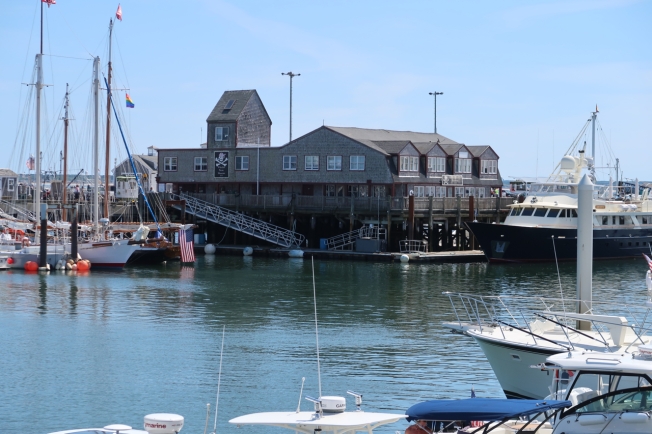 Provincetown – once a great whaling centre with many Portugese sailors

We amble through, loaded down with saltwater taffy and in search of lunch. 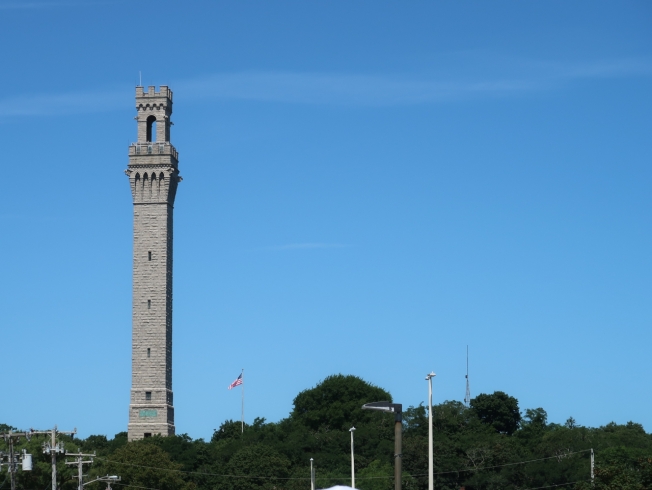 The restaurant we find in the end has views over little boats at anchor. Out of sight are the bigger boats, including our ferry to Boston. 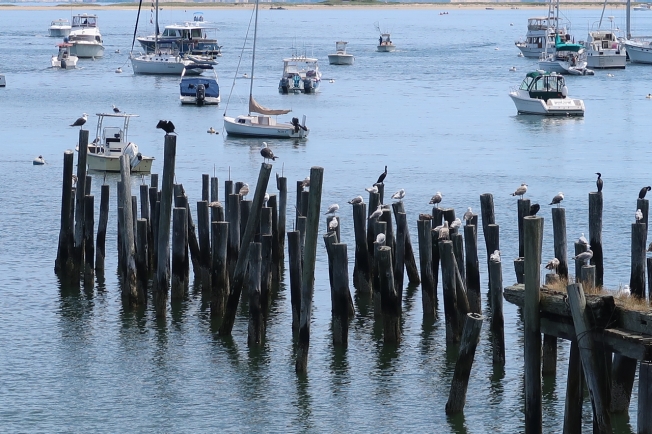 They say that we’ll probably see whales from the ferry … but we don’t. It’s our only disappointment.

The crossing takes ninety minutes and we stand on the front deck, filling our lungs with sunshine. Boston, when we see it, is a bruise on the horizon – a dark, solid stepping-stone waiting to bounce us back to London.

We don’t feel ready to leave. 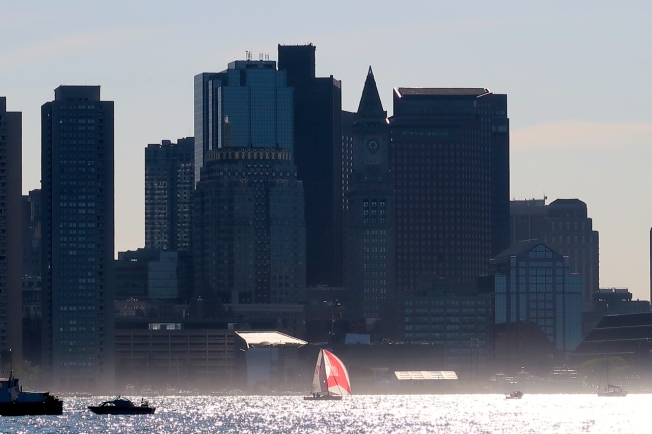 Here are a few links for those who like more detail:

* details how the Cape Cod National Seashore was set up

* more about the horseshoe crab

* and a little on the piping plover 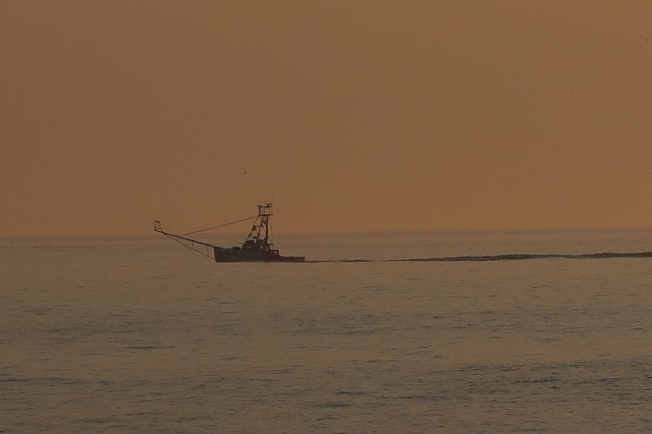 8 thoughts on “Let me take you to Cape Cod”