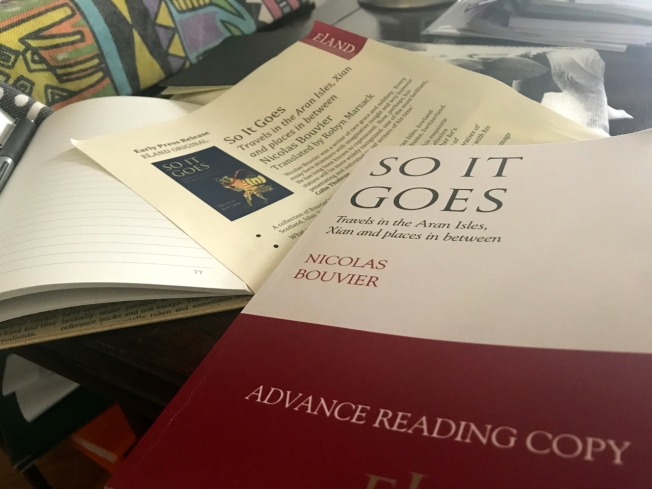 So It Goes – Travels in the Aran Isles, Xian and places in between by Nicolas Bouvier

This collection of essays begins with a river and the road beside it, that “winds without rhyme or reason where it could run straight” .

Together they set the compass for Nicolas Bouvier’s meander beside people and their places, with moments picked out like glistening pebbles.

Nicolas Bouvier (1929 – 1998) was born near Geneva and went to university in the city, after which he left immediately to travel. The pieces in So It Goes are from the 1970s and 1980s, and translated from the French by Robyn Marsack.

The book starts in Ireland, and then blows us on to the Aran Isles where Bouvier, often on foot and feverish from paratyphoid, explores beneath:

“… raging weather, with its scent of wild fennel and the vapour of sea-water …”

This section buffets through religion, history and beliefs, with a rainbow glimpse of the coalwoman:

“A gorgeous, tall woman, in boots and sou’wester, blue-eyed and raven-haired, has arrived in her van to deliver the coal they mix with peat for the fires. She would be better suited to the upper deck of a privateer.”

From the Aran Isles we move on to the Lowlands of Scotland. Here Bouvier, bothered by sciatica, journeys through the region’s past and the shifts in its light. One image plucked from the road, is of a dead pheasant hit by a vehicle:

“The softest feathers were still trembling at a breath of wind. I said to myself that a Scot in a kilt, squashed in the same way would have presented almost the same range of colours.”

He roots these moments through his travels, and makes them matter.

“For a mind such as mine – dark, anxious, disorganised – the contemplation of trees has always been a powerful comfort. Slowness, balance, murmurs or silence – we die of the absence of these things.”

His short essay on Xian, uses the guide, Monsieur X, and the impact of the ‘buried army’, to cover centuries of existence.

“Monsieur X commented on these small miracles, which so pleased us, with the care of a scalded cat, knowing well that heaven could take back tomorrow what it had given today.”

From Xian we move to Japan and Korea, described together in an archipelago of short chapters. There is plenty on the history, but for me Bouvier’s sharpest light is always on the people and the details. For example, in Daegu, South Korea, he lies us down on a thin mattress next to a wall “starred with chewing-gum”, before he takes us on to an old Buddhist monastery:

“… monklings in grey robes play football with woodcutters … They all play barefoot. Their ball is a large bundle of rags. Their game makes less noise than the cicadas.”

The final chapter – which came as a surprise to me – is about Bouvier’s childhood, where he reaches back to the battles he fought with the guardian of the home, Prussian Bertha. We see him pit his memory, and young sense of timing, against her oppression. His champions are his grandparents, and at stake is the right to “… scamper from cellar to attic without anyone yelling or chasing …”.

The end is personal and revealing, perhaps a little payback for a book that wanders with such skill, and intimate good humour, around the lives of others.

I loved So It Goes, and would recommend it to anyone who enjoys writing or is curious about the world.

Thanks to Eland for this review copy.

4 thoughts on “Book Review: So It Goes – Travels in the Aran Isles, Xian and places in between by Nicolas Bouvier”

I don’t think this is as easy as it looks . #thethames #london #tugboat #citylife #riverview #onthewater #thephraser