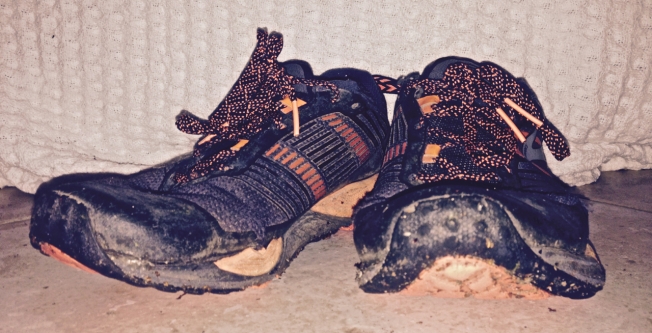 Amy didn’t see me when she walked in. She walked up to the counter, checked her phone and went to stand outside. When she talked her eyes sparkled. She laughed often and loudly. She came most alive when she talked about the pain of running.

I’m a university student, in my final year studying Nutrition Dietetics. I live up in Lancashire but I’m down here for university. I’ve been committed to running since the start of this academic year, so October, but I got into running last year on my placement at Bournemouth.

I worked in a hospital and I was involved in patient care. It was so stressful.

I never worked one-on-one, but I cared a lot about patients. You have to be really good at switching off when you’re doing anything medical or health related. I couldn’t get it out of my head. When I came home I always worried. Was that patient OK? Did I make the right decision? Did I give the right feed? Did I do those calculations correctly? It was all-consuming. I was near the sea and it was summer, so I gave running a go to try and give my mind a break. Whenever I got back, my brain would completely clear and I just kept doing it. It was fabulous!

When I returned to university from placement, I decided that I wasn’t going to play netball any more. I loved the girls on the team, but it was just a really competitive environment. When I didn’t go to trials for netball, my housemates told me that I needed to do something. They asked me what I actually liked about netball and I said running, so when the running club had their first Monday session, they kicked me out of the house. I just turned up.

I’m a casual runner really. I just run with the university club. It’s pretty much all on the road and I’ve entered a couple of races this year, but that’s it. I’d love to be really good at 5km, that’s what I push for but we’ll see if it happens.

Joining the running club for the first time was good. There was one girl that I knew, so I joined the same group as her, but it was hard work. In the first training session I was just dying. I remember going up a hill called The Thunder, and I was in so much pain.

The Thunder is the hill past the station. I don’t know what percentage incline I’d call it, but it’s just long. Maybe 500 metres of incline, and for some reason it just feels exhausting.

For a while, I thought The Thunder was bad … but then I came across Hart Hill. Now I’ve moved on from hating The Thunder. The Thunder is easy, I would run up The Thunder any day of my life. Hart Hill makes me want to cry.

On Monday, whoever is leading the group will pick a route, and I know whether they’re going to take us up Hart Hill or not. I can see it and the stress is awful. I’ve worked out all the possible routes and I know that each group runs a set distance. We do 8km every Monday, so if we’re on about 6km and they turn left out past the bakery then I know that we are going up Hart Hill. It’s a nightmare, but you can’t do anything. I just try to prepare myself. I get my breathing into rhythm and try not to wheeze.

The start of the year I was audibly wheezing. It was awful. With netball, I’m used to running for an hour but on flat surfaces, so any incline is horrible. Before we get to the hill I tell the people that I’m running with, that I’m not going to talk but I ask them to talk to me. That keeps me going.

Everyone stays together on the social runs. If someone drops back, the whole group will slow and people will check their pace, but there is an undisclosed sprint finish at the end. Everyone will be together and then one of us will veer forwards, and the competitiveness in me will respond. I always hope that no one does the sprint finish, but then someone starts … and I’m never not going to go.

I hate running but I love it. Once you’re done it’s fabulous, isn’t it? That’s mostly my experience. I hate it when I do it, but I love it the second it’s done.

Training with the university is lovely. There’s no pressure. We have a social run on a Monday and there are four different groups. It’s really inclusive. The first group runs at 4:40 per km, the next group runs at 5:00 per km and so on. You just go wherever you think you fit in. On Wednesday the club runs a circuit session, and on Friday they run an interval session. It’s really casual.

Most people turn up to the social run on a Monday, a few less turn up to circuits on a Wednesday. The interval session is usually quite small. People know their groups and stick with that. Specific students will coach each session and take each session. It feels like we have a coach, but it’s all student led.

I’m very competitive, and I channel that competitiveness into my training. Whenever I do a session and then repeat it a couple of weeks later, I always want to do it faster. I put 100% into it. Once I set myself a goal, I’m good at getting it done. If I write a session out, I’ve got to do it.

At the minute, I really want to go sub-20 minutes for 5km, and that’s been my goal all year. When I get that I’ll be absolutely buzzing. It’s just about turning up to parkruns and hoping that I’ll get the time eventually.

Earlier in the year, I got a bit stuck. Whenever I ran, my legs would die after 3km. Anything longer felt like hard effort. I finally pegged it when I went out with a friend last month. When I tried to move my legs, it felt like I was aqua jogging. Every part of my body felt like it was being pushed back. I was in the sports park, I got very dizzy and pretty much collapsed. That was when I realized something wasn’t right.

I had no clue what was going on. I was running lots, so I should have been getting faster. The doctor told me that it was iron-deficiency anaemia. She told me to take some supplements. Now my spinach intake has gone through the roof! I have spinach with everything. I don’t think my diet on its own could get my iron levels up. So I’m also taking supplements for now.

I’ve not made my diet that important to my running. I’m vegan, but I used to just eat loads of pitta bread and hummus. Adding running to my life without thinking about my diet definitely didn’t help. I ate a lot of food but it wasn’t what I needed to run.

This is the last year of my degree. I hate the fact that I have to leave and not be part of this club anymore. It’s so fabulous. It’s really inclusive. I went along to the first social session, and although the run was difficult I still felt very involved. After a couple of weeks, it felt like I had been there for years.

I remember that I was nervous to go along to an interval session for the first time, and I told one of the girls – I absolutely love her, she’s got my sense of humour – that I had never run on grass before. I didn’t have any trainers and I said that I was probably going to fall over. She told me that I should come along because it would be funny if I did. That made me feel better. I knew that if I fell over then someone would laugh, and it would all be fine. That’s just how the club is. It’s very non-judgemental. That’s allowed me to progress and have bad days, and still feel OK.

I‘m quite verbal with myself running. Sometimes I will shout at myself when I run. People must think I’m mad. Whenever it starts to hurt, I say things like: “Move! You need to bloody move!” It’s just me swearing at myself, but it feels like motivation. I am never happy unless I have that. I’ll go to each session and wonder if everyone can hear me. I’ve never asked and I hope they can’t … but it’s fine. It really helps. I won’t do it in the gym. But when I’m running, I need a way to outlet the pain that I am feeling. Talking gets it out.

Being at university, the only feedback you get that’s rewarding are your grades, which sometimes aren’t that great. You can work for days and days, and not get what you wanted from the exam because the question that you wanted didn’t come up. Having something else to give me that gratification has been important. Knowing that I’ve worked for it myself, is fabulous.

It’s so nice to have something that you can do individually, and as part of a wider community, and feel so involved. I feel like it’s just so supportive. Especially for mental clarity, it’s been so healthy for me. I could not love it more.

Running is known as a physical health thing more than anything. Maybe that pushes some people away from it. The community side of running, and the general well-being that you get from being outside, is underrated. Anyone who gets out for a run is amazing, even if they can only go slowly. It’s fabulous that they’re giving it a go.