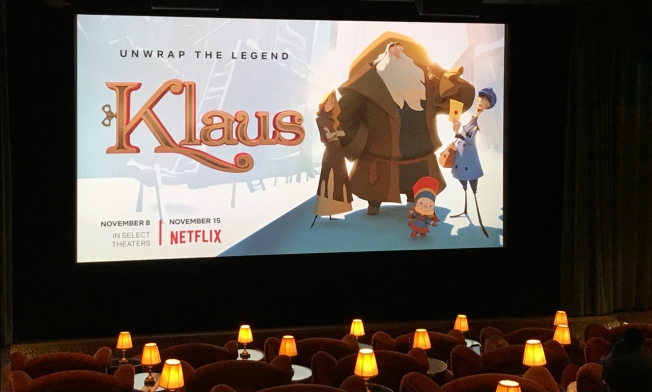 Screening of ‘Klaus’ in the Soho House in London

I was invited to a screening of Klaus by the Writers’ Guild on a wet and windy election night in London.

The evening began with an introduction by director, Sergio Pablos. He praised the talents of the animators from around the world who worked on the film; he spoke of the skill of the stars who brought the characters to life – J K Simmons, Jason Schwarzman, and Rashida Jones; and he mentioned in particular the innovative way light had been painted into each scene.

Then we were whisked away to Smeerensburg to meet Mr Klaus and his neighbours, all in magical 2D animation. 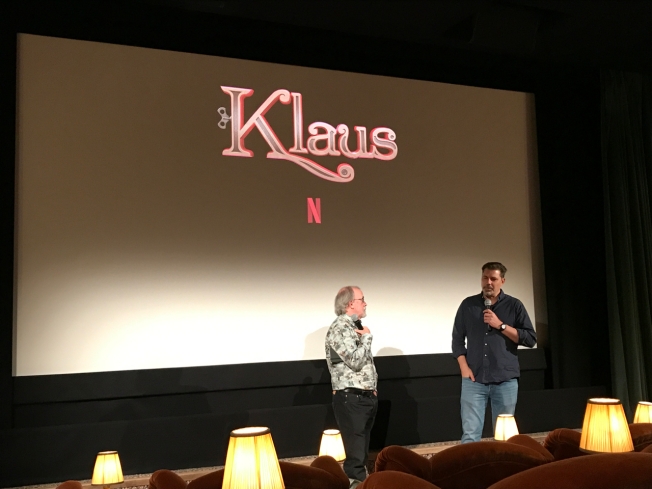 The man who guides us through Santa’s backstory from start to finish is Jesper, voiced by Jason Schwarzman. Jesper is an idle rich boy, born into a postal empire but sent to serve as far away as possible by his father, who is exasperated by his son’s cheery sense of entitlement. The town Jesper is sent to is Smeerensburg, a small, sea-circled town, out towards the North Pole.

I’ve discovered since watching the film that a town called Smeerenburg actually existed, and that it was briefly famous in the early 17th century as a whaling island, with ovens used for processing blubber. It did not survive long.

Anyway young Jesper is sent to somewhere with very nearly the same name, where he has to stay until the islanders have posted over 6,000 letters. When Jesper arrives he discovers it’s been a long time since the good people of Smeerensburg have sent any letters at all.

The postman’s introduction to the town is coloured in a grey misery that suits the citizens who loathe each other, and seemingly have little idea that there are ways to communicate that do not involve violence.

“This is Smeerensberg – the unhappiest place on Earth …”

Stumped at every turn Jesper can think of no way to persuade the townsfolk to send letters. It is only after a meeting with a reclusive woodsman called Mr Klaus – voiced by J K Simmons – that a little light falls across the snow. Jesper’s idea is simple – the big, silent woodsman makes toys, and the children want toys … all he, as postman, has to do is insist that the children write letters to get the toys.

So the idea of Christmas is born. It is for all the wrong reasons, but they do turn to the right ones thanks to Mr Klaus’ insistence that Jesper serve on the frontline of delivery. Gradually the two become friends, both changing in the process. Jesper’s idle selfishness is worn down by chimney climbs, and Mr Klaus becomes less of a recluse.

That’s not to suggest that it’s all easy though. There are plenty of hiccups involving reindeer, beautifully wrapped presents, dangerous dogs, and warring families.

It’s a hard crowd for Mr Klaus to win over, but he is determined:

“We need to show people that a true selfless act always sparks another.”

In one scene a young boy, caught playing with his neighbour, is taken by his grandmother down to see the family portraits in the basement, to be reminded of ‘tradition’, and the reasons why their family does not like the neighbour’s. The eerie trail around the paintings, not all of them peaceful, made for a vivid watch on election night.

Thankfully, in Klaus the movie, kindness wins through, and the settings start to lighten with a warmth that’s painted ever brighter as happiness returns to the families of Smeerensburg, and as Jesper begins to think beyond himself.

As I look back on the film now, little scenes catch on my mind – sometimes funny, sometimes poignant – all beautifully drawn, and building towards the hope that continued kindness brings at the end.

I thoroughly recommend Klaus – it’s so rich with characters, and has a message that is about more than just Christmas. It reaches into the meaning of communities and communication, and shows just how much kindness matters to a child.

Sergio Pablos may have spent many years working with Disney, but this feels individual and wonderfully different.

Screening of ‘Klaus’ in the Soho House in London