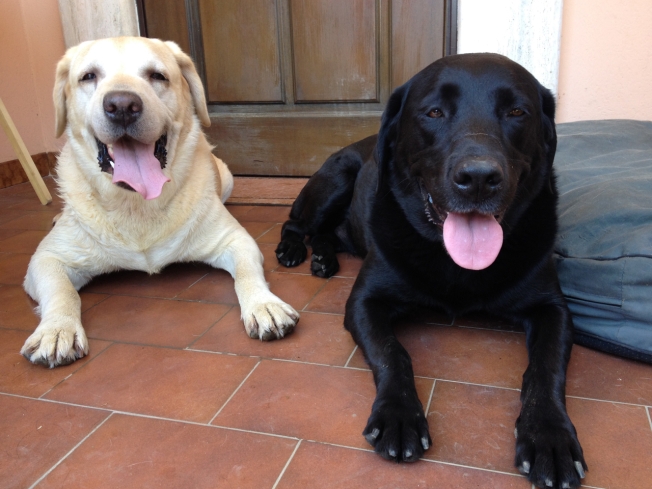 In memory of a great friend and in honour of Shadow – even though not the Shadow.

Hello wherever you are,

Not so warm in London today. There are patches of sun, then northerly winds full of rain gust in. It’s cold, ruffly weather. Earlier I saw two police horses clip clopping slowly down the street … not bothered by the wind, but I’m sure they must love the lack of traffic.

Anyway … to the free writing, and a guest appearance on The Phraser – a piece that gives my writing soul great pleasure.

The following is by my Aunt Jean, aged 95, on the subject of Shadow.

I want to tell you about Shadow, an elderly black Labrador and loving friend of Philippa’s who kept her company in her office until one day his owner asked her to take him to Yorkshire where he was to spend his annual summer holiday. They travelled by train first class to York where they were met by friends. When his holiday was finished Philippa travelled back to York to bring him home to London where he seemed quite content to settle back into Philippa’s office. I loved hearing stories about Shadow and it reminded me of an old song by Frank Sinatra ‘Me and my Shadow, Walking down the Avenue’. Although I never met Shadow I know if I ever hear that song again I will remember him with affection.

Here are my efforts at the topics, plus one I forgot to put in the last blog. The subjects we were given were:

3) description of a person addicted to fire – (write for twenty minutes);

4) hunger (sadly I left the session before that one which was another twenty minutes).

This was the first time I’d done free writing on a laptop, normally I do it by hand. The main difference it made was that I wrote more, but my fingers skipped bits to keep up with the dreaming. Reading the pieces through now, I know that I would cut them back, and fix the typos.

The only other thing to say is that each of these pieces of writing of mine is based around one of two fictional characters who’ve been in my head for about a year. I used this lot of free writing topics to help me look at what these characters might do in certain situations I hadn’t thought of, which helps me to get to know them better.

So here are mine.

It was the shadows that dared. Defiant, they stretched up the wall, alive for the few minutes that the fire jumped high before it curled back into its coals. Simi watched their dance, as the voices blanked into carpet around her as her worries freed themselves from the cold and storm. Creatures from an age before beginnings they played patterns on her mind, and gave her courage.

Rudd stared into the fire. His eyes burned but he held them wide. This was his punishment. This storm was Davy.

The door banged, and banged and banged. How had he done it? Why? They were a team. The two of them – the little guys in the dormitory. Do this. Do that. Fetch this. Fetch that. Nick this. Nick that. Like cockroaches – every passing boot squashed them. But they were together. “The new boys.” “Mummy’s boys.”

Rudd couldn’t stop his hand. It rubbed his eyes, pushed in on his eyeballs, thumb and middle finger down on the hurt, then wide, and back again. He forced his hand back down. Sat on it, the bench cushion moulded to his fingers – crushed on each side. The others still talked, voices snatched here and there on the wind. Behind them the door banged, and above the roof thudded with rain. Davy, Davy, trying to get in. Begging to get in. Terrified of thunder. Him on the inside … Davy stuck out … “Shut that window Rudd.” “You want us to throw you outside too?” “Keep the little wimp out there.” ‘Boo hoo … listen to him …” He could see them, see them all. All laughing – legs swinging, on the beds around him. Him at the window holding the latch down, and Davy stuck out on the balcony. Face swollen. Lightning, thunder. Nowhere to hide. His face. He could still see his face. Rudd felt his stomach clench, his mind crawl to the far corner of his skull and curl into a ball.

It was Jim who opened the window. Quiet Jim – nobody bothered him much. House boxer earned him the right.

Simi stared into the fire and felt its flames lick down inside her. When was the last time she thought. When? Years ago – it would have to be that trip out to Nigeria, the last one to their rural home. How long ago had that been? Thirty five years? Maybe more. She knew she’d been a teenager. She could remember her cousin. Abeo – nineteen at the time and a like a god to her. Studying at the London School of Economics and so smooth. All she wanted in the world was to have his attention, and she’d had it. Just for that one evening when the fire had caught on the hills behind her. Nobody had been bothered to start with. Seemed so far away – just threads of orange looped around the hills … but then it had got closer. It had kept coming, and by early evening begun to jump through the trees on the far boundary. She could feel the dark, smell the fire, hear the shouts. The noise filled her head and her heart pounded with the thrill. To be there in the dark beside Abeo. To be old enough to defend. To hold the line with the others, each of them out there carrying branches of fresh green leaves to swipe back at the fire, to force it back on itself, to keep it from the drying maize field, to keep it from the thatch. She remembered that night – it’s heat and fear. The shouts, the rush to and fro with buckets of water from the pump, and the line of silhouettes pushing forward towards the flames, under the drift of black ash, and Abeo, tasked to guard her, witness to her courage. And she had brave. She knew that. Everyone said that. They still said it. Her heart against the flames. But she hadn’t been brave – it had been a kind of madness, a whirling joy in the drama, the passion.

Now here she was – and it sheltered her. Warmed her, raised her courage upwards. How many years since she’d sat by fire, raw fire. Perhaps a glimpse in a pub here or there, but nothing like this. She’d missed it. Her mind drifted like a flame through a tree to Abeo – where was he now? Last she’d heard he’d been in New York. Something to do with the World Bank. She wondered if he missed fire. If it had branded his soul like hers. Fire and storm – surely both born in and of Africa.

Would love to put up anybody’s stories, descriptions, collection of random sentences, if they would like me to. I could do it with names or without. Part of the fun is seeing where other people’s ideas have gone. The writing is not really the point, rather it’s the places we go … the many different worlds we visit, never sure how we got there.

Tomorrow our group meets again, so I hope there will be more ideas to pass forward later in the week.

Until then, thanks for reading, and many, many thanks to Aunt Jean for writing

6 thoughts on “Free writing: the words we doodled”