I thought I’d choose a calm image for this, as we settle in for another chunk of lockdown.

It feels strange to be so still while around us life bursts out in places we never noticed before – even in London. The photographs in this piece were taken yesterday in a peaceful spot called Bunhill Fields Burial Ground, which is the “final resting place for an estimated 120,000 bodies” amongst them William Blake, Daniel Defoe and John Bunyan. 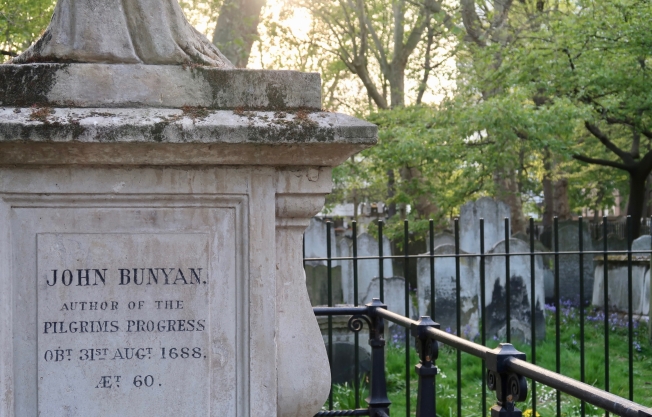 We were there in the evening. A few people came and went, most using the old paths as a shortcut between the supermarket and home, and one or two, including us, for exercise. It was hard to believe we were in the heart of one of the most hectic cities in the world.

It was life without noise, owned by the squirrels and pigeons. 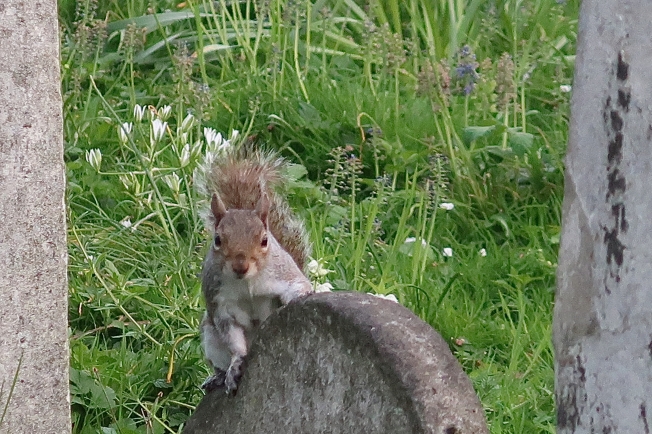 I hope all is peaceful where you are.

Here, thanks to Leonie Bedford in Canada, are a few more free writing pieces. These may be the last on The Phraser for now, or there may be more to come. If you would like to send any in please just get in touch via thephraser@gmail.com.

Before I met her 18 months ago I had been told that she had Alzheimer’s but that it wasn’t noticeable. And to start with that was true but slowly, over time, it became apparent that her memory wasn’t what it used to be. It was little things like she bought a cart to use when going shopping as she wanted to buy plants for her balcony but then she couldn’t remember why she’d bought the cart. Then she couldn’t remember how to find Netflix as she enjoyed watching movies. It didn’t matter what was tried to help her with this, it just didn’t seem to work. About a month ago, she was found with her dog wandering about an hour from where she lived with no idea how to get home. Luckily a bus driver saw her and called the police. Now, she’s living with a friend until she moves into a retirement home. I still call her a couple of times a week. She knows who I am and we chat away but I know that one day that too will be gone.

Like many mothers, her mother played a pivotal role in her life. From the time she could remember her mother had been a constant. When she got sick, it was her mother who made her feel better. In the evenings, her mother read to her giving her a life-long enjoyment of this pastime. She watched her mother prepare meals, learn how to sew so she could make clothes and save money. It was her mother who told her not to follow the crowd but to let the crowd follow her. A hard lesson for a child of 6 to understand but it stuck.

Her mother was a pretty looking woman although as a child, she probably didn’t appreciate this, she was just Mum. Always there, always ready for a laugh and a joke. She was a good sport too. Card games must have been a great trial as just as she was getting the hang of the rules, it would be decided that a different card game would be played. She had a resilience that helped her through many difficult transitions from going to school at the age of 15 barely speaking English to married life, to uprooting herself and moving to a new country and starting over, and to the end of her marriage and having to restart her life as a single person. Yet, throughout all these changes, she maintained her sense of humour.

As her mother entered into her eighth decade things started to unravel. Her mobility became more and more challenging and so her world became smaller. She couldn’t just nip out to the shops, someone had to do it for her. She didn’t want help but she needed help. Cooking and baking, which she loved, became next to impossible. Finally, after two falls she agreed that perhaps it was time to move into a retirement home. But as with everything in her life, once she had made the decision, there was no turning back. For her daughter, it was hard as her mother’s life had to be reduced to what could fit into one room. Sorting through all her mother’s belongings and deciding what stayed, what went was hard as these were the belongings of someone who was much loved, this person was not a stranger, it was her Mum.

The move to the retirement home was not a success and her mother’s life did not seem to improve. Her mother had difficulty remembering that her daughter had called her and was calling her each day. After a month, her mother had gone from being able to dress herself to not, from enjoying food to not. The retirement home didn’t seem to know what to do saying her mother was depressed. But it was more than that because after a month of this, her mother was taken to hospital where it was found she had cancer and it was everywhere. The news was shocking and yet, perhaps not surprising, as it explained so many things that hadn’t seemed right. Right before the daughter’s eyes, her mother had been dying. The last few weeks of her mother’s life were spent in a beautiful setting surrounded by trees and gardens, with birds flitting in out of the bird feeder outside her window. She wasn’t quite so brave and didn’t like being alone. So, her family and friends made sure someone was with her all the time right to the end. It was a quiet death, one last gasp and it was over.

I have a sneaking suspicion that when the pandemic is over life won’t be returning to normal as we knew it before the pandemic. What will the new normal look like? I wouldn’t be surprised if physical contact either with hugs or handshakes may no longer be the norm but that maybe the only thing that changes. Will our politicians be better prepared for the next pandemic? I’m not sure as stockpiling personal protective equipment will be a very sexy proposition or at least not as sexy as building a new highway, museum or art gallery. Will we truly be more appreciative of what we have or will we go back to conspicuous consumption? Only time will tell but I have a sneaking suspicion, we will revert.

Thank you for reading, thanks to Leonie Bedford for these thoughtful pieces, and a special thank you to Saraswathi Sukumar for keeping this journey going for so many of us.

I meanwhile am off to work on this famous podcast … will let you know if I ever get anywhere with it.

2 thoughts on “Free writing: word doodles – writing for the fun of it (by others)”