Four months of lockdown is a long time.

The door has opened slowly over the last few weeks but life still feels strangely slow motion, especially here in the City of London.

It all began in late December with reports of pneumonia in Wuhan, which were confirmed officially in early January 2020. A week or so later, on 11 January, China shared the genetic sequence of COVID-19, and on 13 January Thailand reported its first case.

But it was all still far away … or was it? Many on social media did not think so. Anxious faces trapped in screens urged people to buy masks and to prepare, whilst London, in a weird state of anxiety-denial, tried to carry on with life as normal.

At that time I still used public transport. I took the train and worried about the elderly couple closest to the man in the carriage with the repetitive cough. On the bus I was glad to see the person with ‘flu get off at the first stop. In a crowded chemist the young Italian lady who served me warned that it was terrible in the north of Italy, and that London would be hit soon. It was unnerving but still ‘normal’.

Then, on 9 March, Italy declared a national lockdown, and in London many large firms made arrangements for all employees to work from home.

Two days later, on 11 March, the World Health Organisation (WHO) announced that COVID-19 could be described as a pandemic.

Another week of feverish ‘normality’ followed. Households that could afford to began to stock up. Shelves emptied but the pubs stayed stubbornly full.

It was on the middle Monday in March, that Prime Minister Boris Johnson delivered his first daily coronavirus update with Professor Chris Whitty and Sir Patrick Vallance beside him (too close it later turned out) for scientific support. Over the days that followed they urged us to wash our hands, keep them off our faces, to stay away from crowded places such as pubs, and to self-isolate for fourteen days if we had repetitive coughs or high temperatures.

The British penny began to drop – we were in real trouble.

Trolleys gathered speed. Hand sanitiser cleaned up. Face masks vanished with the warning that if found they should be left for those in real need – those on the frontline of the NHS (National Health Service). Again and again we were reminded that masks were only for health workers, and potentially harmful to the casual wearer. 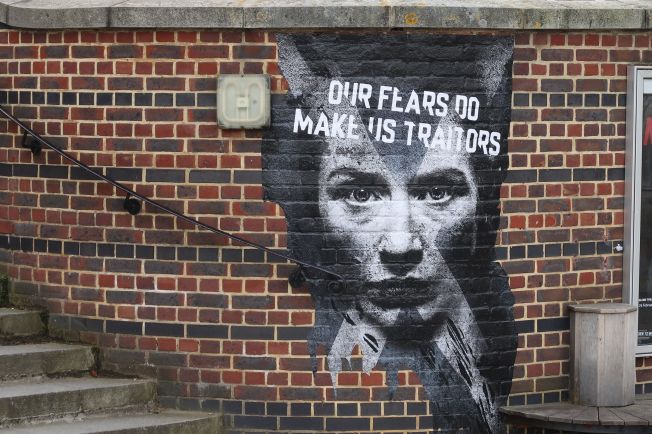 Outside the Globe Theatre – London, 2020

By the time the order came to stay indoors half of us were already there, but for those who weren’t, the key officially turned in the lock on March 23rd.

We were in the City of London when it happened – when the skyscraper factories fell silent and we all had to stay put, not for three weeks as we imagined, but for nearly three months, only allowed out for essential shopping and twenty minutes of daily exercise.

Four days after lockdown began Johnson announced that he had tested positive for COVID-19. On Sunday 5 April he was in hospital, and in intensive care the following day. That was a shock, as were the levels of loss and stress that filled the news broadcasts. The Thursday clap was a tiny chance for us to show our admiration for those on the frontline.

It was the time for heroes. We found ours in the supermarkets, and the supply chains that fed them. Those on the shop floor that we knew, returned to their posts again and again, to stand unmasked in the thick of our ungainly rush for soaps, and tinned tomatoes. Often those who served were not the youngest, or the fittest, but they were calm and they were there.

As the graph lines speared upwards it became clear that life indoors would be here for a while. Every day came news of shredded lives, all of us reminded constantly of those propelled to the unimagined trenches that now surrounded us.

The mood was oppressive … and then Captain Tom began his magnificent walk, pushing back the darkness for all of us.

We began to walk too, but not in the same way. Our walking, like that of hundreds of others in the City, was for exercise and to get outdoors. I took my camera with me.

In the cold winds of early spring I photographed glass facades with empty desks stacked to the heavens. Below them security guards sat stranded, alone in vast atriums. 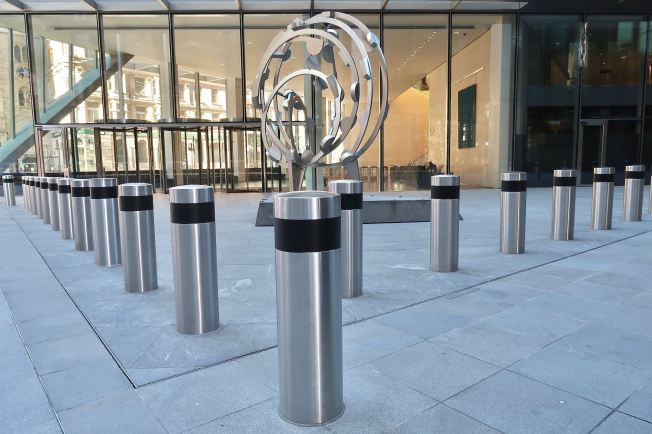 Pavements and roads stretched almost lifeless, splashed occasionally by the staring windows of vacant buses, and screeched by the automated ping of traffic lights as they called for commuters to cross. Perhaps ghosts were there but we didn’t see them, and the cicada ring of the green men was remarkable in a city that no longer had call to use its sirens.

What we missed most were parks and light, but we were lucky as we had access to a small courtyard that had some sunshine for a few hours at midday – a warm gash of it between the surrounding buildings. The lift its light gave us became more important with each day that passed, and a reminder of how miserable life must have become for those in cramped, shadowed spaces.

Whilst outside we found the green gardens that we could, most of them were small, but the best of them were filled with blossom and birdsong. Sadly many of them, sometimes bigger, were locked away on rooftops, or in churchyards, or labelled as private. It was frustrating that there was no wide green horizon within our allotted sphere.

But we did have the river Thames whose tides came and went regardless, and at night the bridges were lit like beacons in the darkness. We walked the river’s edges many times, overtaken always by the hushed footfall of the young runners who streamed the spaces but seldom stopped. There was no chat either, apart from with a few of the homeless – veterans who knew the City far better than us. We looked forward to meeting them. 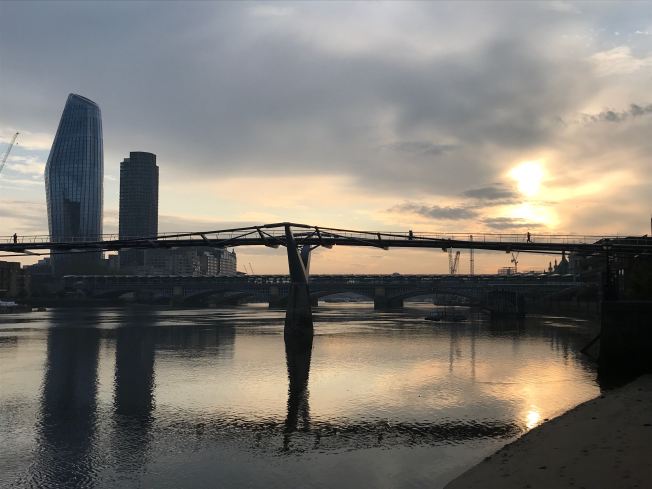 As the weeks turned to months the air cleaned itself free of cooking smells and pollution. We became used to crossing roads without looking, and to shuttered shop fronts.

Leadenhall Market, in the City – London, during lockdown 2020

We hunted for old cobbled alleys but found many had given birth to skyscrapers – some still scarred with the building debris that marked a recent forceps delivery.

Over the weeks the routes became familiar, and it was the details that caught the eye. A favourite were the messages that businesses, forced into sudden closure, had put up for their customers. Most, churches included, seemed to have simply locked their gates, turned out their lights and put up curt announcements. 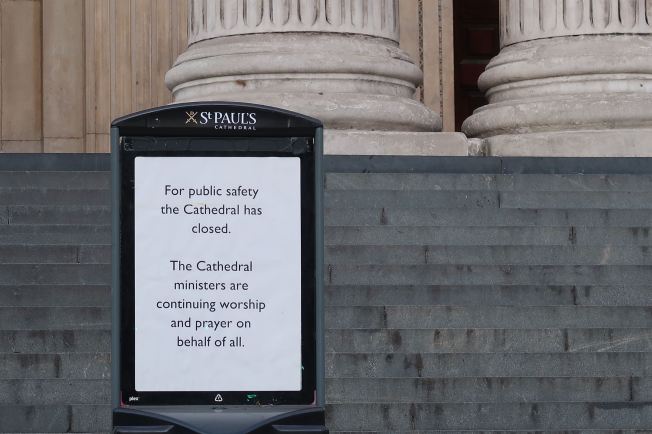 Independent restaurants and shops were more personal, and some heartbroken. Only a few were brave enough to share a joke.

In early May this strange time began to lift at last, with permission given to meet outside with one other person from another household. During this phase the river frontage by the Tate Modern, with its message of thanks to key workers, became a favourite spot. There we could sit on the grass, meet a friend, watch skateboarders and tennis players, and listen to a busker’s music lift above the tidal race of languages around us.

Tennis at the Tate Modern – London, during lockdown 2020

We were in a place suspended – on the edge of one of the world’s historic arteries, with its pulse paused to almost nothing. 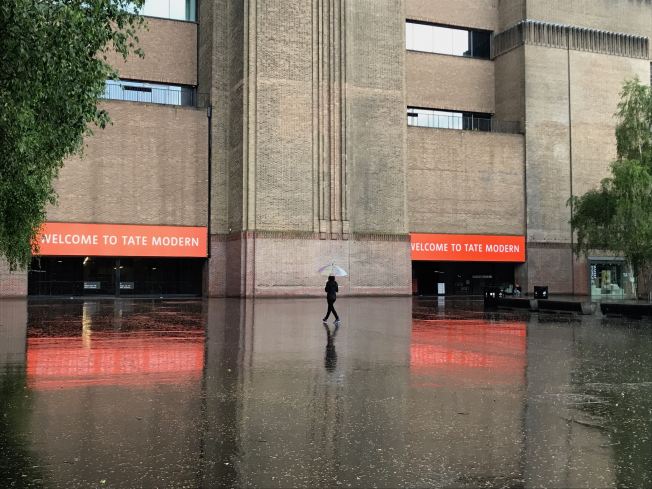 Outside the Tate Modern – London, during lockdown 2020

Traffic has edged the cyclists back into their lanes, and construction-work-yellow is bright on the streets. More pubs and shops are open but they still look, and feel, fragile as they wait for the creatives to be allowed back, and wonder if the money spinners will ever reclaim their towers.

We are amongst the ‘waiters’. On the inside we feel the same, but without realising it fully have become part of a new cohort of barely touched, indoor people, with over-scrubbed hands, and a distrust of the spaces others have to offer. We have been thoroughly taught … and now we have a new lesson to learn – that masks must be worn in shops as well as on public transport. Tomorrow this lastest change begins.

It’s been a long way to here.