Time for the answers to Crossword 3. I always find these more fun than the questions, because when I read through them I can convince myself that I would have known them anyway. To save you having to flick back, the answers are written out beside the questions. You’ll see them just beneath the puzzle below.

The Tour de France featured quite heavily so any knowledge of this year’s race would have got you off to a good start. 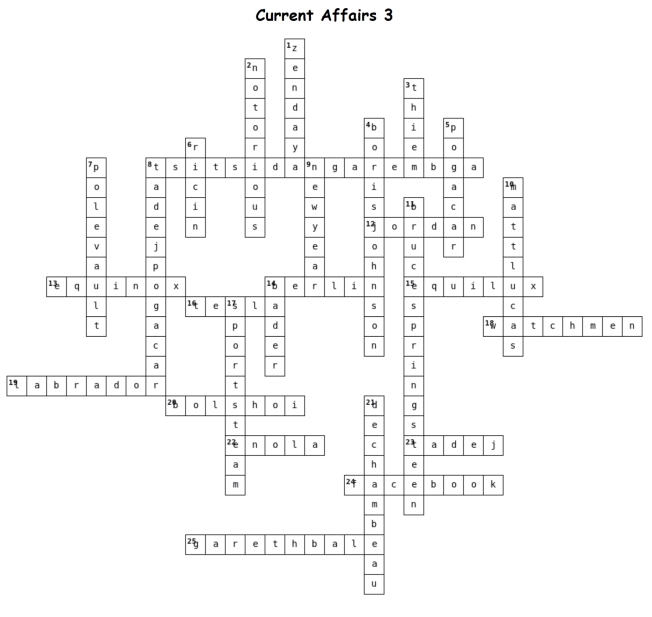 Across
8. Author of Booker shortlisted novel ‘This Mournable Body’ (6,11) TSITSI DANGAREMBGA
12. Michael ______; basketball star who has formed Nascar team with Bubba Wallace (6) JORDAN
13. Moment when the centre of the sun is directly above the equator (7) EQUINOX
14. City in which Russian opposition leader was recently discharged from hospital (6) BERLIN
15. Name given to a date when day and night are exactly the same length (7) EQUILUX
16. Company that announced new batteries alongside the ‘Model S Plaid’ (5) TESLA
18. TV drama that won 11 Emmys (8) WATCHMEN
19. Cold current in the North Atlantic that shares its name with a peninsular in Eastern Canada, and dog breed (8) LABRADOR
20. Final performance at this Russian theatre’s opening had to be cancelled after positive Covid tests (7) BOLSHOI
22. ______ Holmes; new Netflix detective drama (5) ENOLA
23. ______ Pogacar; winner of the white jersey at the Tour de France (5) TADEJ
24. Tech company contemplating moving out of Europe over data protection laws (8) FACEBOOK
25. Footballer who has returned to Tottenham Hotspur from Real Madrid (10) GARETH BALE
Down
1. Youngest ever winner of best lead actress in a drama series at the Emmys (7) ZENDAYA
2. The ________ RBG; rap inspired nickname for US ex-Supreme Court Justice (9) NOTORIOUS
3. Dominic ______; winner of US Open tennis tournament (5) THIEM
4. World leader who’s Covid plan relies on ‘a stitch in time saves nine’ (5,7) BORIS JOHNSON
5. Tadej ______; winner of the Tour de France (7) POGACAR
6. Poison mailed to the White House (5) RICIN
7. Athletics event with new 6.15m record (4,5) POLE VAULT
8. Winner of the polka dot jersey at the Tour de France (5,7) TADEJ POGACAR
9. What event in the Jewish religious calendar is Rosh Hashanah? (3,4) NEW YEAR
10. New Great British Bake Off presenter (4,5) MATT LUCAS
11. Boss who turned 71 this week (5,11) BRUCE SPRINGSTEEN
14. Ruth ______ Ginsburg; Supreme Court Justice, feminist icon, and US national treasure (5) BADER
17. Mercury nominated band who narrowly lost a chart battle with Lady Gaga (6,4) SPORTS TEAM
21. Bryson _______; US Open golf champion (10) DECHAMBEAU
Thanks to Crossword Labs for the site, and The Phraser’s volunteer crafter for the clues.