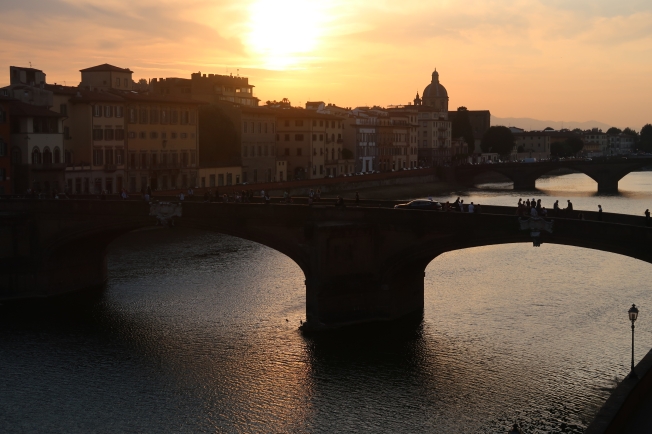 I did not think this trip would happen.

A weekend in Italy? A wedding in a country brought to its knees in agony by Covid-19 only months earlier? Surely not. 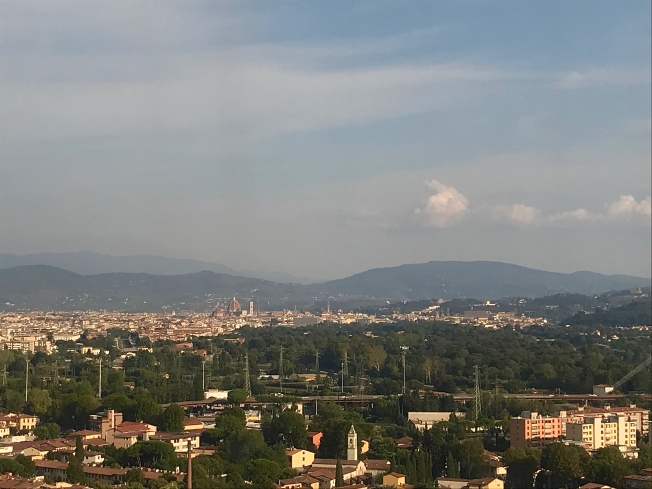 View of the Duomo, landing in Florence September 2020

Mid-September, in a chaos of luggage and face masks, we took a flight out of London City Airport. It was our first taste of public transport for over six months, and it proved to be a muffled experience. There was no bump and jostle, no cheeriness. We were masked and alone amongst travellers, each of us dislocated by the threat of disease as we made our own ways, evasively, towards departure.

The flight was smooth and all passengers well-behaved. We, like everyone else, received sanitiser and snacks with barely a murmur.

That slightly numb feeling persisted at Florence Airport, where the same cautions policed us, except now in Italian. Outside the sun shone, but still our holiday spirits sagged.

A taxi dropped us at our hotel where hand sanitiser met us at the entrance. Inside, the friendly, but distant, welcome procedures were completed carefully in the empty lobby.

We took the lift up to the fourth floor. All was quiet. The corridor hushed, lined with the doors to soundless rooms. Were we alone? The only tourists in the building, trapped in a coronavirus web?

Strange how a mind can shift under the idea of threat.

The room was high-ceilinged and clean, with big windows at one end. In any other circumstances the perfect dream … but the shadows clung … until we pulled open the shutters, and there it was. There was Florence. 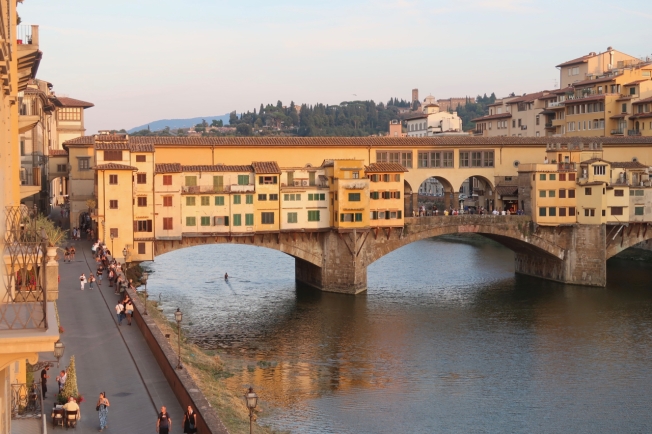 Every sense came alive. Each thread of fear spooled back into perspective. Below us the Arno River stretched into the distance, with Ponte Vecchio to the left, and Ponte Santa Trinita to the right. The far shore was stacked with buildings, each different to its neighbour, and shadowed by evening light. Voices and laughter lifted up from the street beneath. We’d arrived. 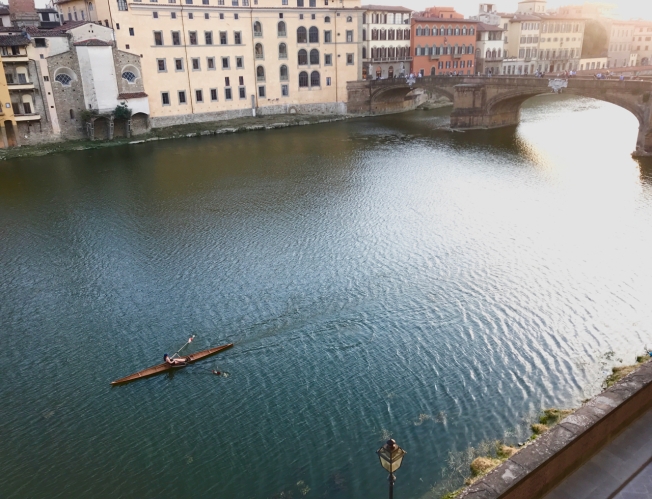 Florence, Italy – view from the Hotel Berchielli in September 2020

Was there a scent of any kind? Not that I remember. Just clean air – inviting and unthreatening.

We closed the windows, bounced over the thick carpet and down the stairs into the sunshine, freed suddenly of the suffocating sameness of life on hold.

That first evening we wandered aimlessly along the streets in the vague direction of the Duomo, which we reached with the last of the light. We circled it quietly, faces masked and minds distracted by the life and change of it all. The great cathedral was the same, but now the only language that filled the air was Italian. The tourists and incomers had vanished, so had the hustle … it was like a stage, almost too beautiful to be real.

An hour or so later the candlelit tables on the steps of the Museo Zeffirelli caught our attention. At first it was just for an aperitivo, but the menu, the wine, and the view of Florence silhouetted by a blue black sky proved irresistible. 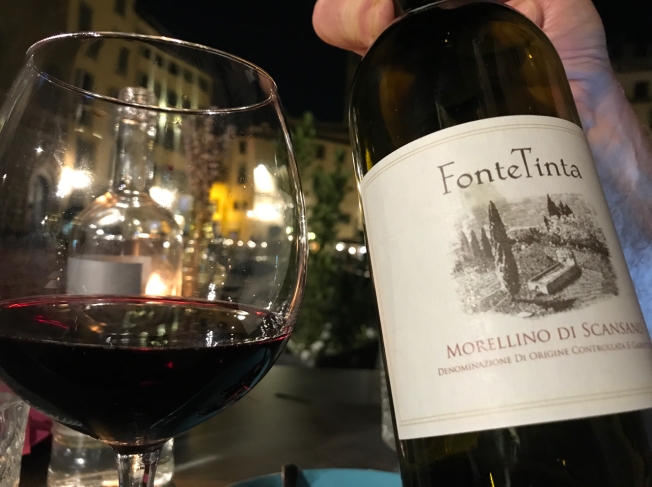 The Tuscan wine we enjoyed our first evening in Florence, Italy

We lingered late, and then went off to look for the source of the theatrical music we could hear a few streets away.

In the Piazza della Signoria, at the feet of Michelangelo’s David, we found the answer – a line of Ferrari racing cars, patrolled by red-overalled team members. Around them the square had been converted into an arena with metal stands curved high to the front, and the Palazzo Vecchio and David behind them. Red light flooded the cobbles and the remnants of the audience. 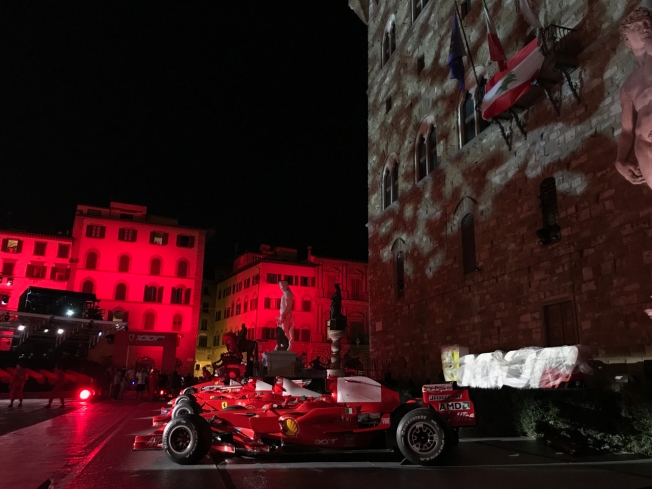 The celebration of Ferrari’s 1000th Formula One race, in Florence, Italy – September 2020

We made our way through the bodies and raised mobiles that still pressed up against the barricades. It was impossible not to be infected by the crowd’s eagerness to catch every last detail of this celebration of Ferrari’s 1000th Formula One race. We found out later that the race would take place that weekend at the Tuscan Grand Prix, on the Mugello track, just to the north of Florence.

At The celebration of Ferrari’s 1000th Formula One race, in Florence, Italy – September 2020

The next morning we crossed Ponte Vecchio, which felt like a completely different bridge to the one we’d squeezed across four summers earlier. This time, unconstricted by crowds, it had turned into a quirky piazza, dotted with butterfly students.

We strolled through them to explore the shops in the area around Palazzo Pitti, which we imagined, perhaps wrongly, would be less expensive than on the ‘grander’ side of the city.

Our mission? To find a wedding hat.

They were right to be worried but, thanks to their help, we were in our pew by the end of the afternoon, hands crusted with sanitiser and happily hatted.

It was a joyful service, that spilled out on to a piazza and then on to the terrace of a ‘fattoria’ outside Florence, where we celebrated the new bride and groom by candlelight and in at least three different languages.

Our last day, Sunday, was the hottest of the weekend. Late to start, we stored our luggage at the hotel, and set off on foot for a final explore. This time we clung to the shaded streets in the richer part of town, our only purpose to look.

Amongst our finds was a wall with poetry pasted to it and then, a few corners further on, the headquarters of ‘Calcio Storico Fiorentino’. Curious about the plaque on the wall we did a little research. This is what we learned.

The game (historical Florentine football) dates from at least the 16th century, and is played in historic costume. ‘How charming’ you might think … but it’s probably best to think again, to think Rambo rather than Renaissance. ‘Calcio storico’ is to football as bull-riding is to dressage.

The game is played between two teams each with 27 adult males on the pitch, many of whom will have lost their shirts by the end. There is one ball, two pitch-wide goals, and a storm-load of violent contact once the start is signalled. No substitutes are allowed. Each game lasts fifty minutes, and is decided by goals scored.  The teams each represent one of four historic neighbourhoods of Florence, with the champion of the four decided each year in June. The prize to the winning team used to be a particular type of cow but now, I have read, it is a meal. The players receive no payment.

This year, due to Covid, the match has had to be cancelled, but you’ll get a bone- splintering feel for it via the first in the ‘Home Games’ series on Netflix. It’s quite a reminder that cities are more than just their cathedrals and galleries.

Our own minds in adjustment we wandered on, following the shade until we turned into the sedate and spacious Via de’ Tornabuoni. This, we discovered, was where the big designer names have their stores.

We peered in and admired, but it was the three giant balls of metallic reflection hung high in the courtyard of the Palazzo Strozzi that made us stop, and then move right in until we stood beneath them.

Part of the ‘Aria’ exhibition by the Studio Tomás Saraceno in Palazzo Strozzi in Florence, Italy

They were captivating. Each of our masked reflections became part of the whole, all of us linked together in this, the first piece in the ‘Aria’ exhibition by the Tomás Saraceno Studio. The exhibition was due to open in February, before most of us knew much at all about Covid-19, or quite how much our ‘interconnectivity’ would impact us all. 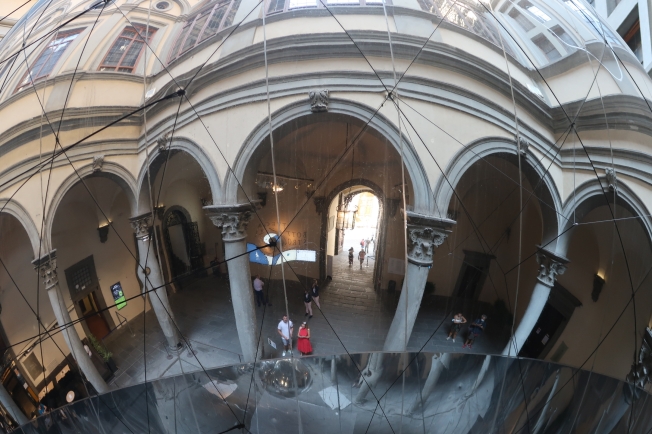 ‘Reflected’ in part of the ‘Aria’ exhibition by the Studio Tomás Saraceno in Palazzo Strozzi in Florence, Italy

We ended the morning with lunch next to the first obviously English couple we’d met all weekend. They were a young pair – residents perhaps, we weren’t sure – waiting we assumed, like the rest of us for life to begin again.

That evening we flew back to London, and arrived back in the City a few hours before midnight. We stepped out of the black cab, back on to the street where we live and, a short walk later, rattled with luggage wheels, we were back inside our font door.

The thud when we shut it felt like a timelock had clunked closed behind us.