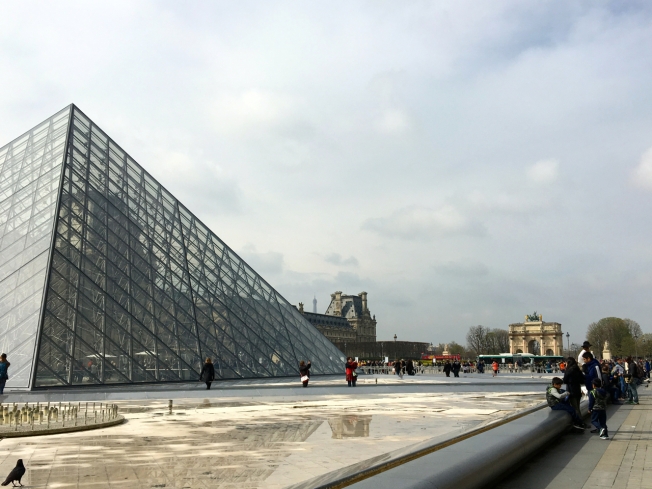 “Any chance you can join us?”  A message from an American friend pings into my in-box.  Hmmm?

There’s sensible … and then there’s Paris.  Even if only for a day.

In the train station at Charles de Gaulle Airport in Paris

All goes well from Gatwick to Paris.  Then there is a post-arrivals pause in a long queue towards a distant machine … the only last minute way to buy a ticket from Charles de Gaulle to the city itself.

But, we manage and the man in black can play. 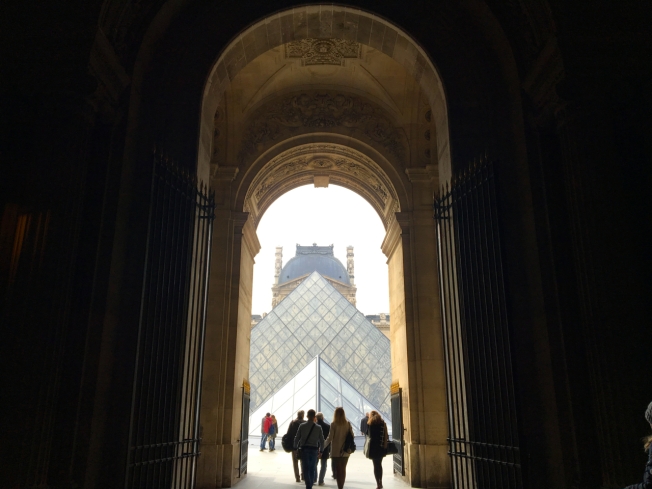 Our rendezvous in Paris is the Pyramid at the Louvre.  What a place.

We walk though giant buildings, eyes fixed on the panelled glass ahead, on its light, on the dance of air and sun.

This is where we meet.  It’s been four years without a glimpse and now here we are by the Pyramids in Paris.

Looking in on the Louvre – Paris, France

Lunch is the first stop.  We find a café and settle in.  There’s wine, there’s coq au vin, salade niçoise and crème brûlée … and it’s warm out of the breeze.

Eventually we step back out into the March day Paris has chosen for us.  There is occasional sun but there’s also a wind that frisks its way into everywhere … but nobody minds.

We cross over the Seine.  Paris spreads out in every direction – big but not uniform, outlined in grey slate over cream.

Along the Seine in Paris, France – some stalls not open

Musicians fly their notes into the wind, down the river, and over the stall-holders with their books and prints.  Above us new leaves tip the chestnut trees.

It is beautiful and imposing, but tinged with sadness.  We cross one bridge and then find our way back over another. 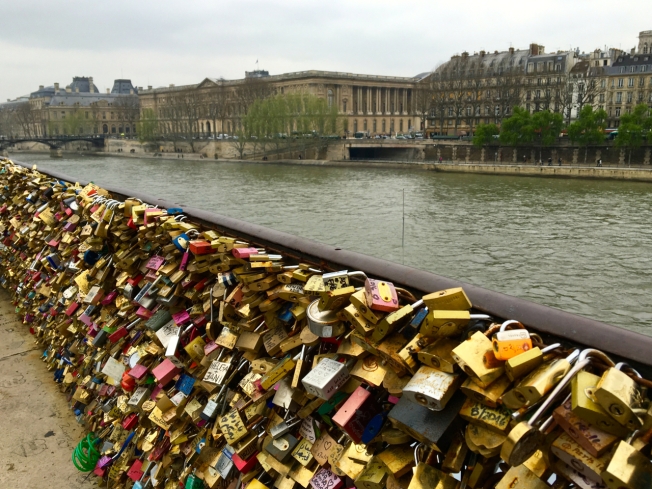 Love locks on a bridge over the Seine in Paris, France

On the second bridge, hedgerows of steel pay tribute to love … but today there are no couples in sight.

Looking at love on the Seine in Paris, France

We stroll on to Notre Dame Cathedral.  It bulks into its square, fed by a long, thin placenta of visitors.  We decide to tour the outside.

It’s Gothic, big, over seven centuries old, and has gargoyles perched on every high-altitude angle.  There is nothing ‘pretty’ about any of it but it does have the charisma of power, of an ornate fist.  No surprise really that this is where Napoleon chose to crown himself emperor of the French. 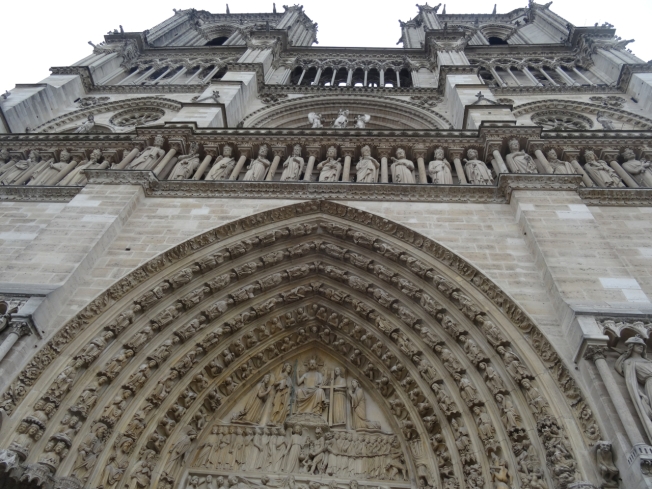 There is also no shortage of detail. 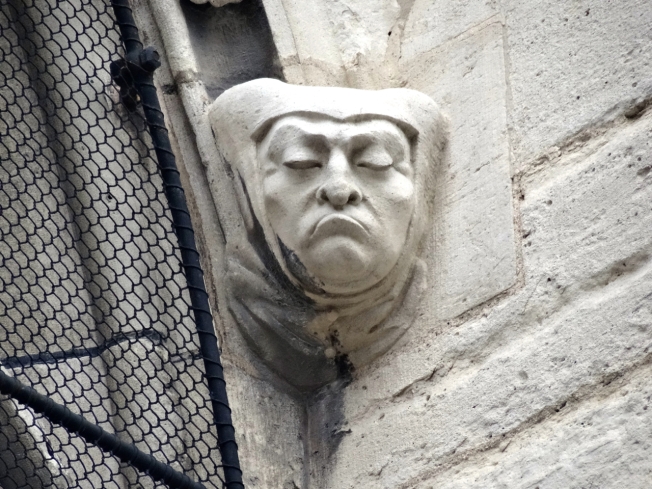 Detail from the outside of Notre Dame Cathedral in Paris, France

From Notre Dame we wander away from the river and into the shopping streets towards the Marais district of Paris.  The road we take, guided by stationery enthusiasts, is rue du Pont Louis Philippe.  It’s a good choice.

Here we find a poem of a paper shop – Mélodies Graphique – and, around the corner, a meringue emporium – Aux Merveilleux de Fred.  Magnifque doesn’t really cover it.

It’s just one day in Paris but there’s a lot that’s magnifique … and people are friendly, there is no cold aloofness.  Helpfulness is everywhere – from waiters with coq au vin, to papier sellers, to meringue masters, there is not one sign of the grumpy shrug. 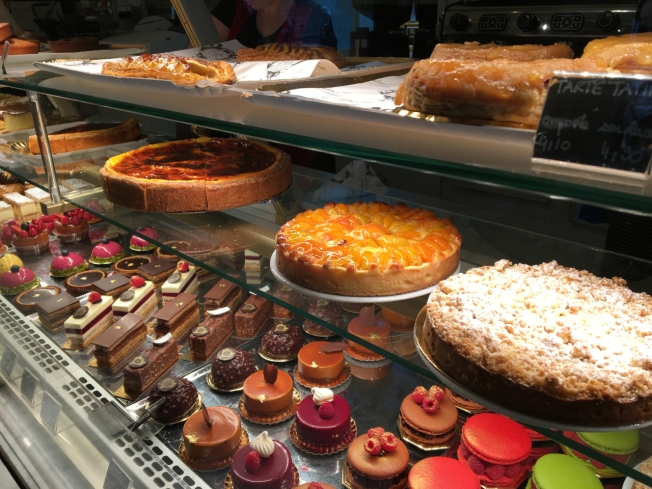 It’s a feast of calories and conviviality … until we head for the Metro home.

It is five o’clock on a Friday evening … what are we thinking?

Life beneath the streets of Paris is in spate.  We step into the thick of it with new tickets, our old returns rejected by a fresh bank of machines.  This is rush hour and we are clearly mad.

Half an hour jammed on the platform confirms this beyond all doubt.  There are trains but apparently none for Charles de Gaulle.

The station is low-ceilinged and crowded. Nerve strain increases with every minute we wait.  Trains do rush in but then they pause for minutes at a time, their doors open as squashed passengers lean out for air.  We stare at them from our edge and they stare back at us, all sides ten deep and willing the train on.  That way one can leave and another arrive … but ours does neither.

These are depths, and there is despair … but, suddenly, a tall, lean English-speaking man with a backpack appears at my elbow.

“Follow me,” he says.  “This train for Charles de Gaulle is not coming. Come, come.”

We follow.  Back through the crush, up over the platform and down the other side.  A train on the new platform closes its doors and moves off.

“That was it…”  Our guide’s face is tense with frustration.

Then there is another mysterious, muffled announcement.  We listen but catch nothing.  Our hero does.

“Hurry. Hurry.  Our train has arrived.”  He turns and races for the stairs.  We follow again … up over the platform and down the other side.  So close.  The train doors are still open but a wall of commuters, glued together with sweat and hand-luggage, blocks us.

Our hero does not hesitate.  He plunges through the platform crowd, wedges an opening in the wall, cries out in French, and miracles inches out of nowhere.

We squeeze in as the doors suck shut.

We travel, squeezed tight, for two stops and then the train empties.  There are no seats, but there is air all the way to the airport.

We arrive in good time thanks to our miracle-worker from the Metro.  He has ‘saved our day’.

We say our good-byes and hold tight to the lesson – rush hour beneath Paris is busy.  Avoid it if you can … there are far pleasanter ways to pass time in this city. 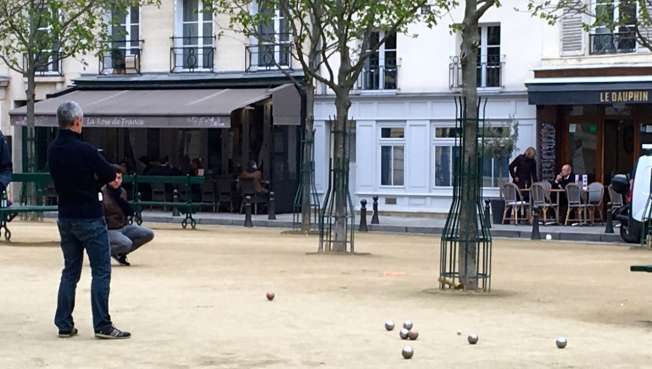 Here are a few video clips to add to the flavour:

4 thoughts on “To Paris, France for the day”