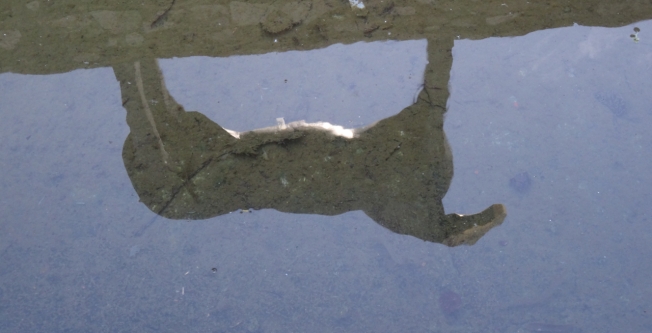 Reflection of the horse that followed me to Benevento

I didn’t expect to see the horse.  The guidebooks never mentioned that one would be there, nor that others would be hidden in the same space.

My first sight of the horse was in Naples.  He’s tucked around the back of the Royal Palace where he struggles to climb out of a mound of salt.  You don’t forget horses like that. 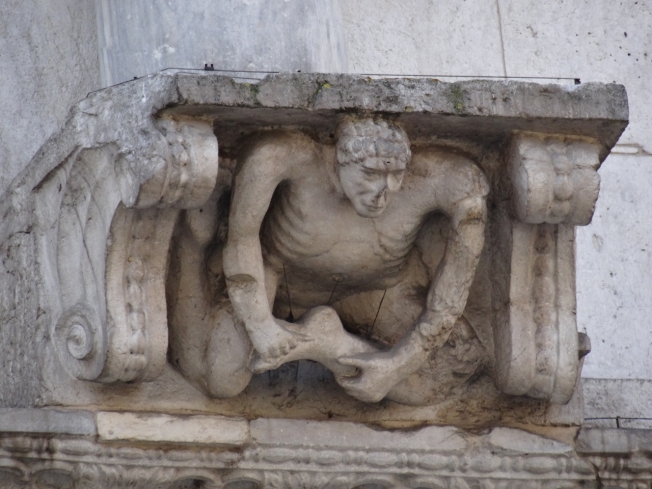 The day I see him again we’re in Benevento, a city about fifty miles north-east of Naples.

We are in the old city for two reasons: one is to see Trajan’s Arch – built in AD 114 and one of the best-preserved triumphal arches in the world; and the other is to find out more about ‘the Long Beards’ – i longobardi.  The horse does not feature in our plans at all. 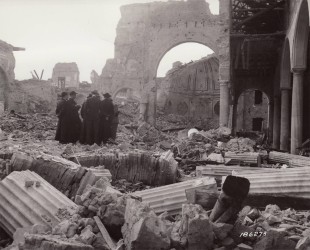 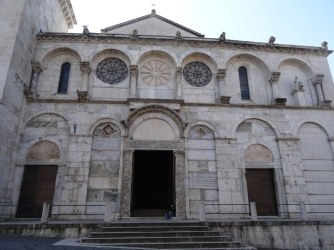 Benevento Cathedral, rebuilt and modern, but first consecrated in 780

We park beside the city’s huge cathedral – a rebuild following Allied bombing during the Second World War.

The car park (or square) is large and empty.  We pay a negotiable fee to a man-out-of-nowhere who promises to watch the lonely vehicle, and set off to explore.  It’s a beautiful, crisp February day.

Trajan’s Arch, our first stop, is in a small patch of green, down a slight slope at the end of today’s Via Traiano. 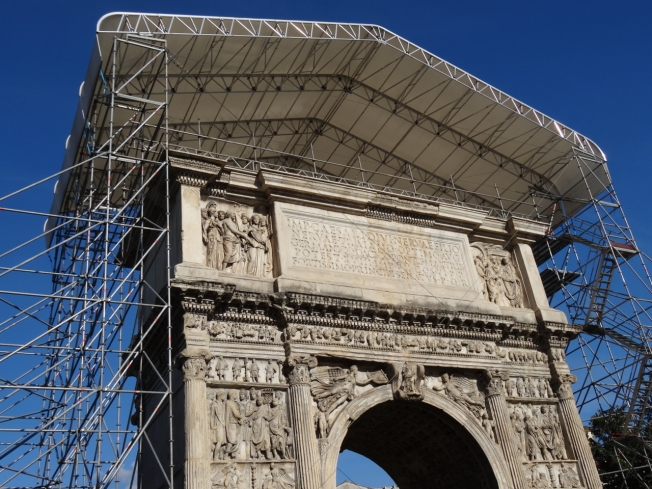 The faded triumph of Trajan’s Arch in Benevento

The arch is squat, grey, and still handsome, but without a trumpet note of triumph.  When we visit a Zimmer frame of scaffolding pokes out to either side, beneath a weatherproof metallic bonnet. 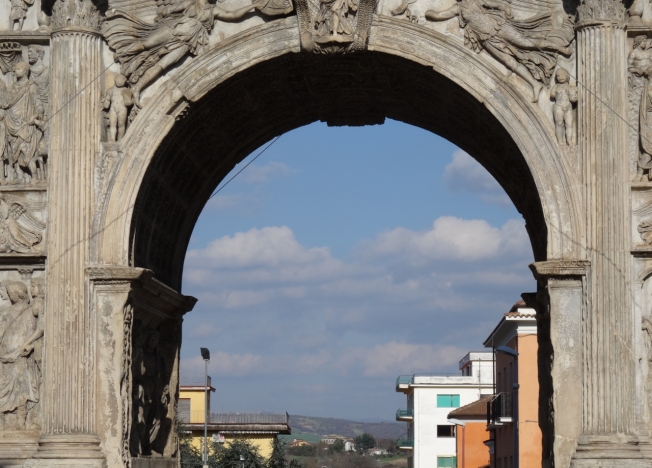 View through Trajan’s Arch to modern Benevento and beyond

The backdrop is modern apartment blocks, and over the fields behind them there’s a glimpse of mountains in the distance. 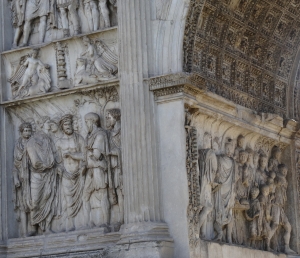 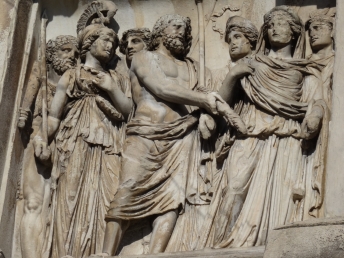 The arch, an ancient Roman veteran abandoned by his city walls, might be a touch wobbly on his feet but his message is still there. 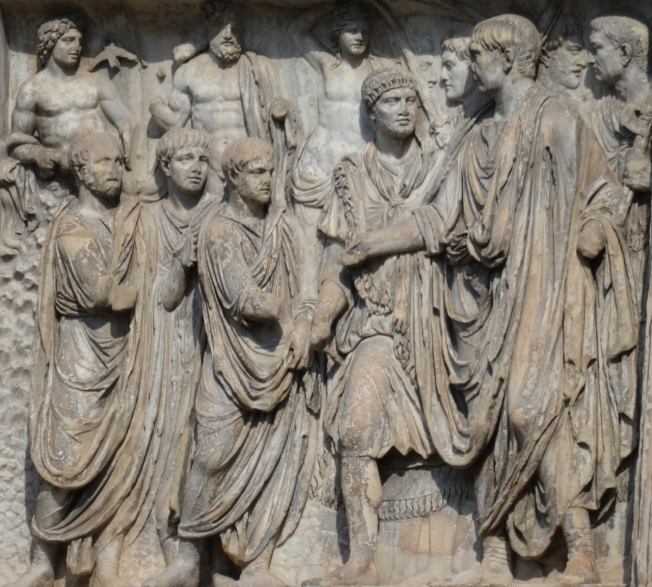 His reliefs, like old medals, tell his story: Trajan, the first non-Italian Roman emperor, was great; and so was his Via Trajana which swept the Appia Via on from Rome through Benevento to Brindisi.

Benevento mattered to Rome, and the arch is witness to that. 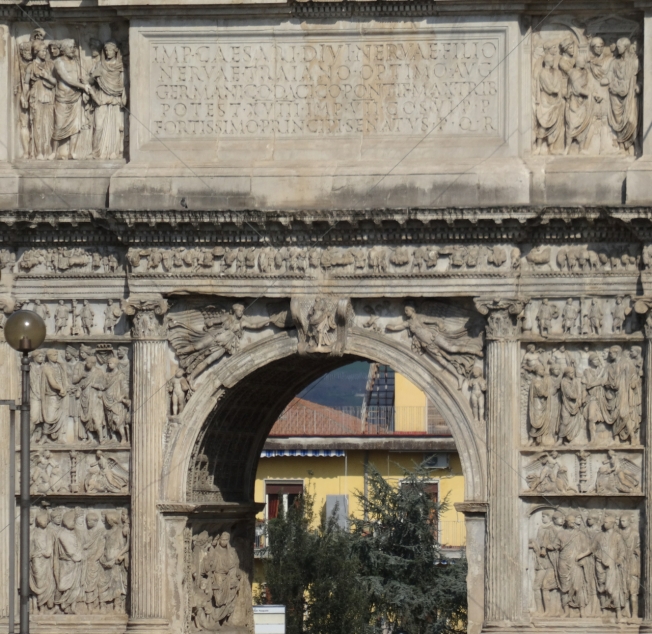 But Roman influence does not last forever.  Around the middle of the 6th century, power begins to shift and i longobardi arrive.

It seems they come south from Scandinavia, dawdle for a while in north-eastern Europe and Germany, and then, between AD 568 and 774, consolidate their power across parts of Italy, one of the most important being the area that includes Benevento and its neighbours.

Map of the Duchy of Benevento in the 8th century

The Longobards bring with them a mix of cultural influences: Roman, Christian and Byzantine. 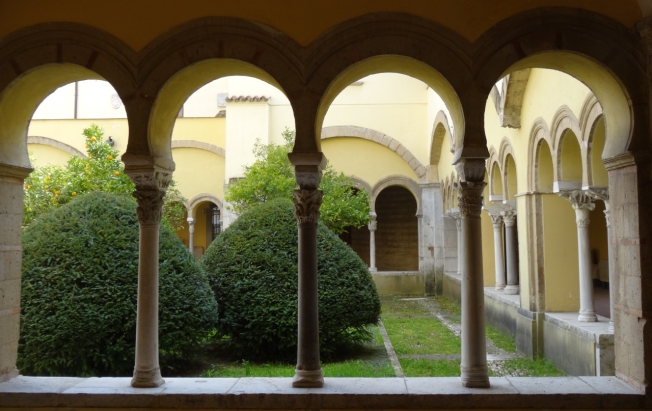 The petite cloister of Santa Sofia in Benevento

In Benevento one of their best-known thumbprints is the complex of Santa Sofia.  This is where we go next.

The complex has a petite, elegant cloister and an appealing star-shaped church of vaulted arches and columns. 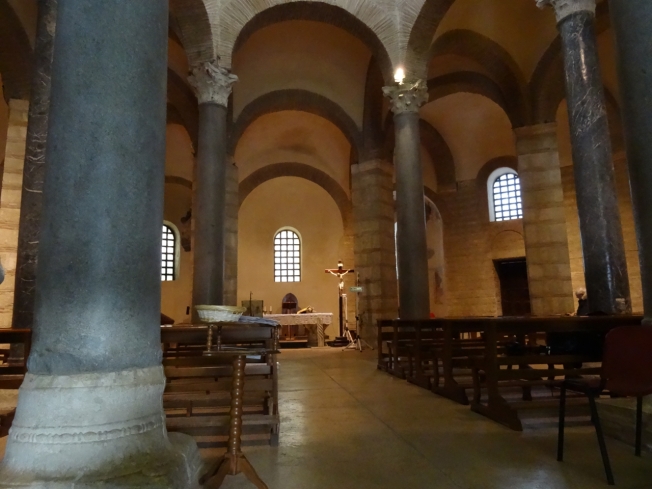 The church of Santa Sofia in Benevento

It, and six other Longobard sites in Italy, have caught UNESCO’s eye, but even so there’s hardly a tourist in town when we’re there … in fact we are, clearly, quite a surprise. 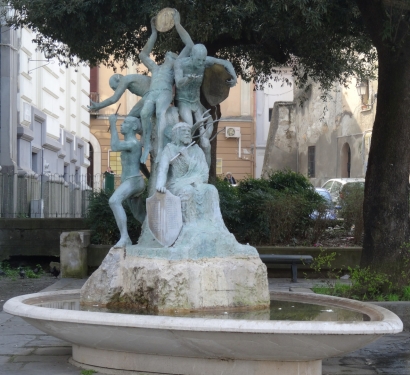 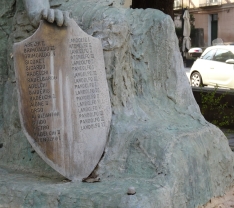 Benevento and its past 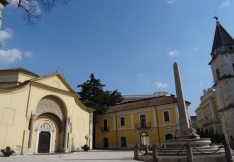 Benevento and the church of Santa Sofia

But what could be better than being the centre of attention in Benevento? 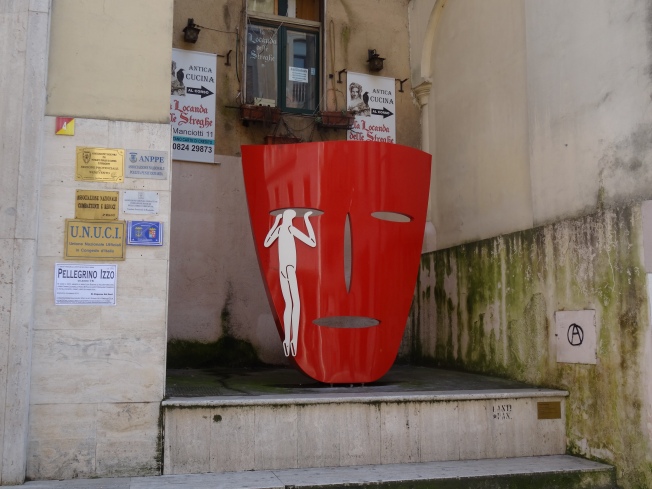 We have the wide, paved areas; the mountain views; the renovated history; and all the quirky corners to ourselves. 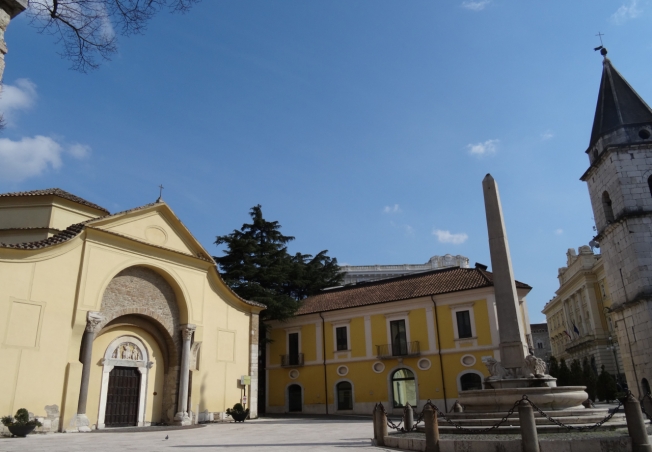 Benevento and the church of Santa Sofia

Our final visit of the day, and it’s only by chance, is to a small garden.  That’s where we meet the horse. 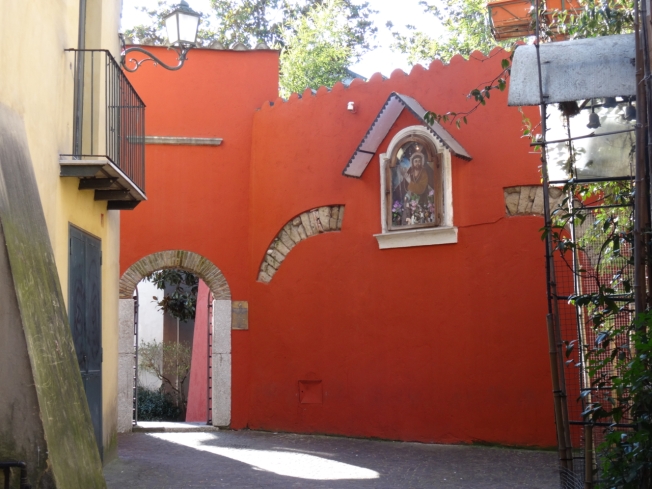 The entrance to Hortus Conclusus in Benevento

We step through a bright entrance into the Hortus Conclusus (‘enclosed garden’, ‘carefully laid out hidden sanctuary’) … and there he is, high on a wall, golden visor facing out to whatever lies beyond. 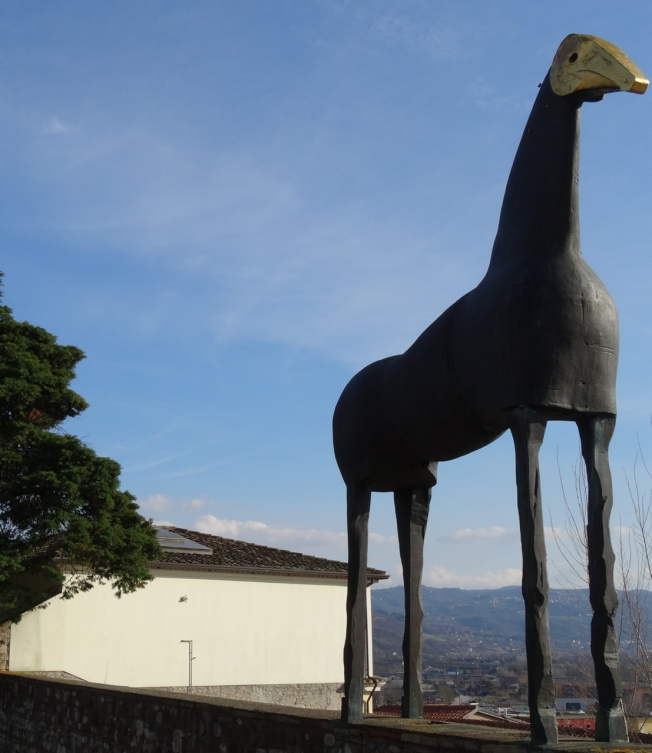 Mimmo Paladino’s horse in the Hortus Conclusus in Benevento

Like everything in the garden, he is the work of the Italian artist Domenico (Mimmo) Paladino. 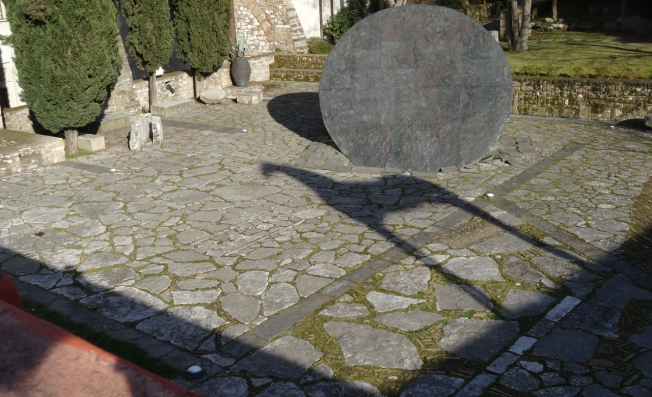 Paladino, born just outside Benevento in 1948, spent much of his childhood in Naples then returned to study at the Liceo Artistico in Benevento. 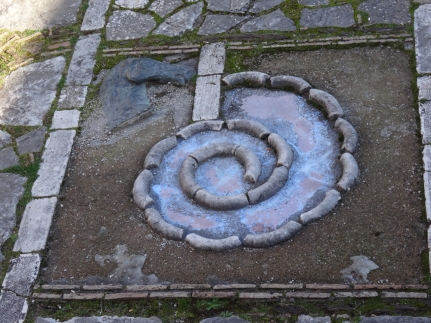 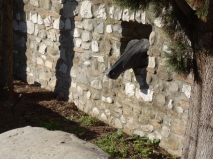 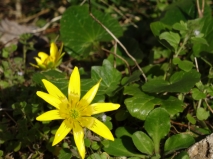 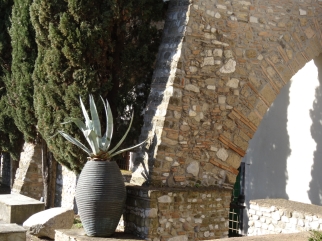 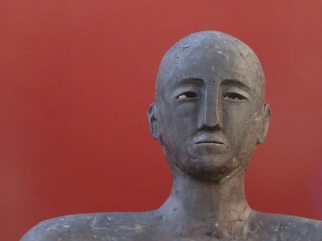 His garden – for a city built on top of empires, and full of shadows and spiritual shifts – disrupts thought.  It leaves you free to feel as your eyes wander over and around his long-armed figures, his up-turned umbrella of tiny faces, his symbols, his patterns, the careful tumble of old stone. 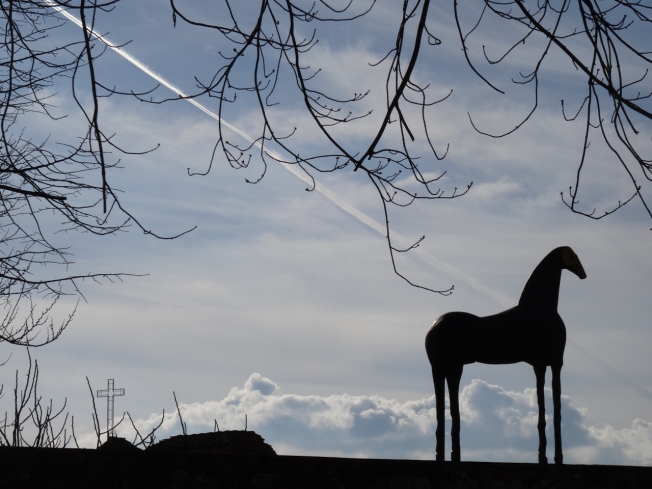 The horse in Benevento

Detail is everywhere but it’s the horse that dominates – like the city it stands in, it’s bold and unafraid. 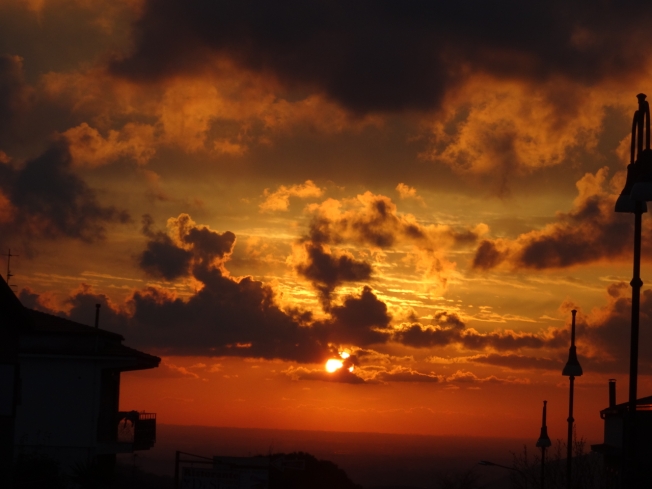 The sunset as we left Benevento

The evening drive home to Naples – the city where I first saw Mimmo Paladino’s horses – was busier than the morning’s …  but all we really noticed was the sunset. 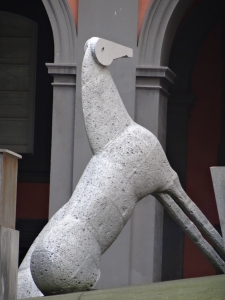 The following are some of the sources used for this article – special mention goes to the links to the witches of Benevento and their Strega recipe which was gifted, apparently, to the city:

The Longobards in Italy (on the church of Santa Sofia)

The witches of Benevento

Strega – the herbal drink of witches

The Longobards: Mythic origins, history and archaeology of an ancient people (Italia Longobardorum and UNESCO)

10 thoughts on “The horse that followed me to Benevento”