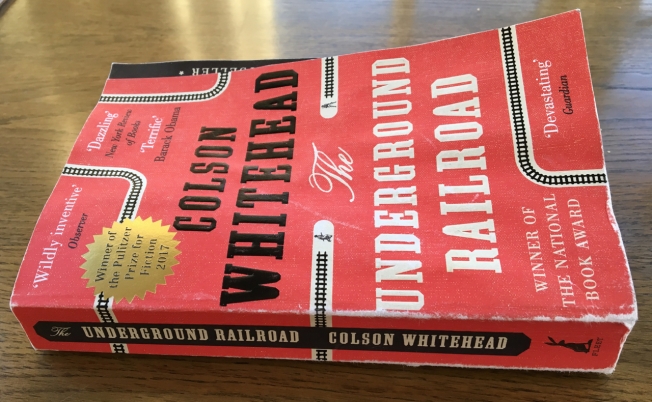 Thoroughly read copy of The Underground Railroad by Colson Whitehead

I know of slavery, of its shame and horror, and neither makes it my preferred topic when it comes to books. But this was a gift … so I began.

It was worth it.

Founded on captivity, and big on pace, The Underground Railroad is a pounding read of hope and murder. It rushes between settings on trains buried in magic realism.

What is this railway? It took me a while to work it out but I have now discovered that, in the real world, the underground railroad in America was a collection of routes and safe houses used to pass slaves on to freedom. In the book it is brought to mystical, physical life as a network of buried tunnels and trains, that link runaways to those prepared to help.

This is the system that carries Cora, the teenage slave, towards freedom.

We meet Cora first as a young orphan on a plantation in Georgia. She is isolated and abused, and persuaded finally to attempt to escape. Her flight across the mainly southern states of America is one of danger, and uncertain opportunity.

As a tale it has a life of its own, but it also allows the author to show us more. Tied to Cora, first we are taken inside slavery, and then faced outwards towards the risks of freedom. The danger is vivid. It flexes between the pages, ominous and everywhere, as Cora tests each of her new beginnings.

“Each time they completed one leg of their journey, the next unexpected segment commenced. The barn of shackles, the hole in the earth, this broken-down boxcar – the heading of the underground railroad was laid in the direction of the bizarre.”

Wherever she arrives she is the outsider, the alien, and must adapt quickly. The journey takes her from slave, through terror and experience, to the brink of ‘freedom’, to the point where she feels tempted to stay, and to contribute.

An easy tale of progress you might think … but it’s not. Scattered throughout the book are real advertisements for the return or report of runaway slaves. They, and the slave catcher Ridgeway, stalk the stages of Cora’s journey – one is hard evidence, and the other character coloured to stick in the mind like a splinter. Both add drama and tension to the tale – both underline the ache that still haunts America.

I loved the strength and story of The Underground Railroad. It made me feel, and it kept me interested and on edge.

The Underground Railroad has won plenty of prizes: the Pulitzer Prize; the National Book Award; the Carnegie Medal for Fiction; the Heartland Prize; the Arthur C. Clarke Award; and the Hurston/Wright Fiction Award. There’s probably more.

If you’d like to read a little more about the book, the subject and the author here are some links: