Statue in the square that overlooks the old cave houses in Matera, in Basilicata in Italy

Our three days of travel are almost up.  We have one day left and one last place to see.

We leave the coast near Puglia and, with global positioning satellite technology as our guide, travel alien-style towards some of the oldest homes on earth – the cave dwellings (sassi) of Matera. 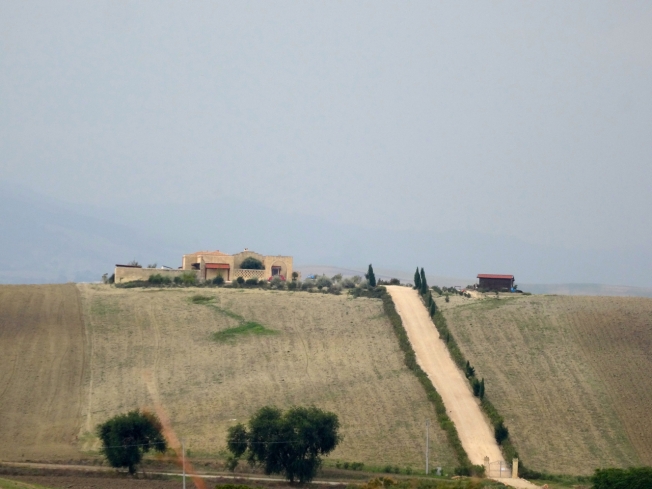 Basilicata, near Matera in Italy

It is a grey, misty day.  The roads are good and there is little traffic as we thread our way up the instep of Italy to the eastern edge of Basilicata.

In no time the dense olive plantations of Puglia are behind us.  We wind on for miles over damp Tarmac laid out between low hills. 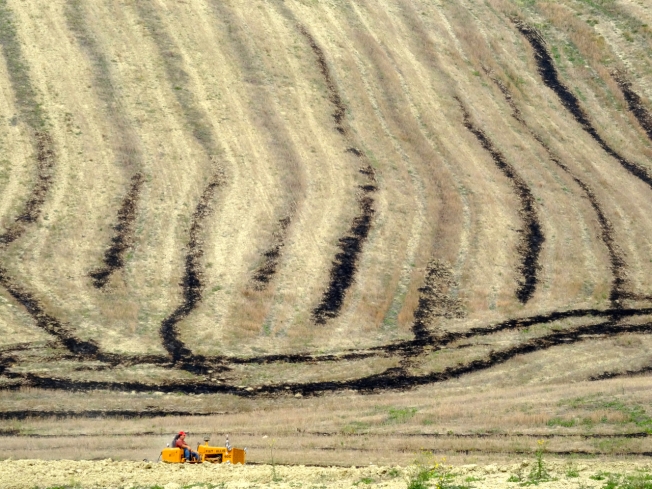 In the fields to either side of the road there are goats but no cattle, and just one glimpse of a handsome black horse.  The grazing looks sparse and the soil un-giving. 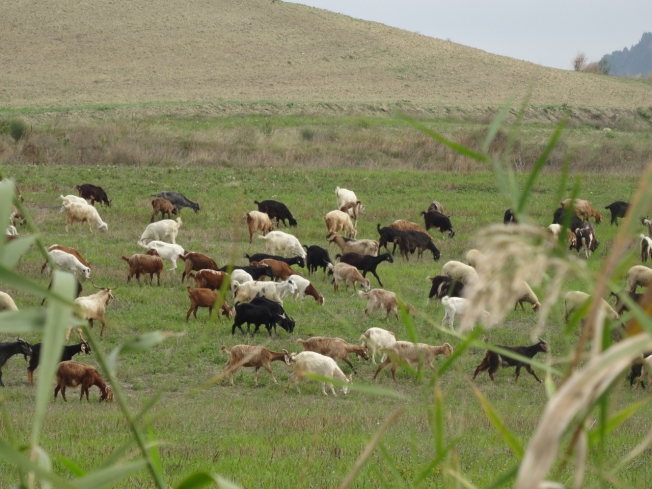 In places the Tarmac struggles to hold its shape, but …

Road damage in Basilicata in Italy

… it apologises and takes us on through the rocks and gorges towards our destination.

Basilicata near Matera in Italy

Suddenly, out of nowhere, Matera is there.

Our route takes us in through modern suburbs where a policeman at a barricade tells us that all traffic must wait ten minutes for a parade to pass through the town centre.

Eventually the blockade is lifted and we drip-feed down through the town.  We are amongst unremarkable buildings lined with cars, and with no sign of anything that is worth the parade-day stress of trying to find a park.  We’re about to give up when a space decides to lay itself down right in front of us.  We accept.

We discover the sassi on the far edge of town … just the sight of them is worth every shred of stress.

One bright banner in Matera in Basilicata

Their pale, hand-made facades cling like honey to the sides of the uneven bowl that drops in front of us.  We stand on its lip and wonder. 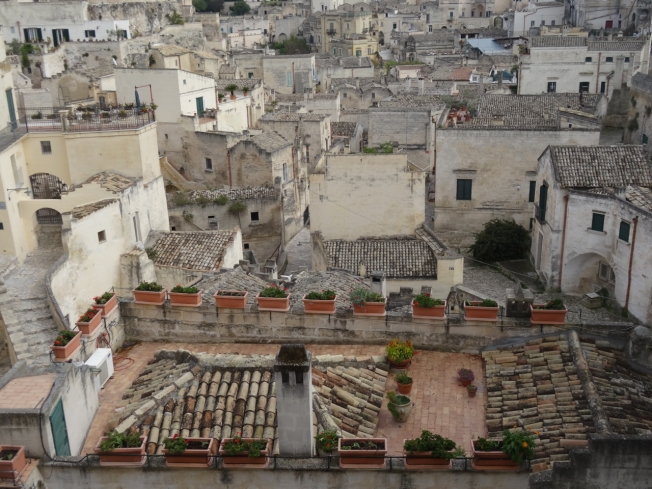 Soft browns jumble around stairways of worn stone.  The quiet colours are marked by flowers and the sound of bells.

A sprinkle of tourists in Matera in Basilicata in Italy

Tourist umbrellas trickle past.  We watch their plastic colours zig-zag through the sassi – new life drawn back to the age old rocks of Matera.

Then we too choose our own cross-hatch of stairs down to the base of the bowl and pick a path upwards … new additions to the awkward, modern dots in UNESCO’s “most outstanding, intact example of a troglodyte settlement in the Mediterranean region, perfectly adapted to its terrain and ecosystem.”

The stones that surround us are clean, organic. There’s no sign of the squalor that forced the evacuation of the sassi of Matera in the 1950s.

The old site, once impoverished and abandoned in shame, is now reclaimed and sits, tidy and venerable, where it has always sat.

We wander around the simple, interlocked caves, many of which still provide shelter, some as new hotels for tourists.

Each stone we step over belongs … it is poetry written in rock, crafted over millennia.  The connection to The Passion of The Christ feels real – Mel Gibson was right.

They also remind us of our need to return to Naples.  We don’t have the hours to do justice to the centuries of Matera … but at least we have seen a sample.

We make our way out of the sassi and across a piazza where a tired statue aches with hardship – a reminder of the pain behind the beauty of what we have just seen. 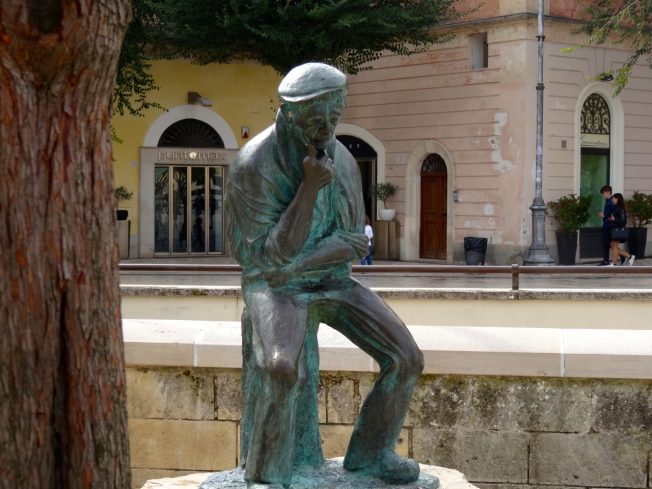 In the square in Matera in Basilicata in Italy

It seems too easy to climb back behind our navigation system to drive away … but we do.  We move on.

Here are two links with background detail on Matera.

This links to UNESCO and its reasons for listing the sassi of Matera as a world heritage site.