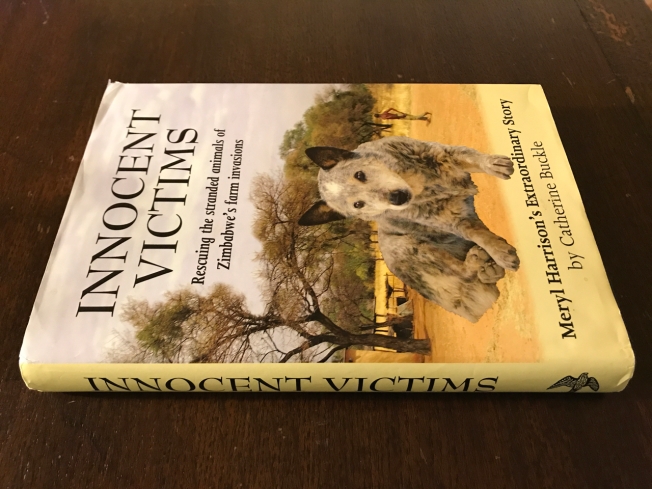 Turmoil tore into Zimbabwe’s farms in the early 2000s, the years Mugabe’s government chose to ignite its programme of land redistribution. Thousands of animals were trapped in the mayhem that followed.

Innocent Victims tells the story of the rescues carried out by a small team from the Zimbabwe National Society for the Prevention of Cruelty to Animals (ZNSPCA). The team leader was Meryl Harrison.

The book begins in March 2000 shortly after Meryl Harrison’s 61st birthday, and it ends on 31 December 2004 – her last day with the ZNSPCA.

Cathy Buckle, the book’s author, provides the context to Meryl Harrison’s first-hand accounts of the rescues carried out during the upheaval.

“Meryl didn’t know in July 2000 that, for the next five years, virtually every day of her life and every aspect of her job would concentrate almost entirely on rescuing animals from seized and invaded farms.”

Surprisingly, the tale does not sink the reader into misery. Rather it bumps across thousands of miles of Zimbabwe, frantic with frustration and desperate to protect.

Meryl’s diary entries are to the point.

“Concession: Addmore and I travel to Concession and rescue four Border Collies, one old cat and three owls. The farmer had been physically beaten by war veterans and the son was not allowed back to the farm to feed the dogs.”

The book takes us miles around Zimbabwe as we rush with Meryl and her team to reach the animals on the wounded, isolated farms.

“I remember realising that life for folk in town had been proceeding as normal, the majority of my friends and even work colleagues really having no idea what hell the farming community – not that many miles from Harare – had been going through.”

Those who know Zimbabwean farms will understand instantly the setting of each rescue.  They will know the distances, the landscape, the feel of the homes.  They may also know the fear and confusion caused by the mobs at the farm gates, mobs Meryl has to face again and again.

“I was scared because the situation was noticeably getting out of hand. I was conscious that I was the only white person for miles and the youths had now also come back, attracted by all the shouting.”

Innocent Victims remembers the dangers, and the courage of those who helped.

“One cannot describe the absolute desperation and devastation knowing that you have, by force, had to leave your pets unattended, essentially abandoned. The weeks leading up to the animals being rescued were terribly emotional. Thank God for the courageous SPCA Meryl, Addmore and Misheck.”

The book, made up of diary extracts and statements from those who were there, is calmly pieced together by Cathy Buckle. It remembers pain and loss, as well as success and recovery. I highly recommend Innocent Victims to anyone, but especially to those interested in animal welfare, or connected to Zimbabwe. It bears witness to a chaotic, damaging time.

Innocent Victims was published by Merlin Unwin books in 2009.  I contacted them again in October 2018 to find out if hard copies of the book are still available, and have been told that it will be as ‘print on demand’.