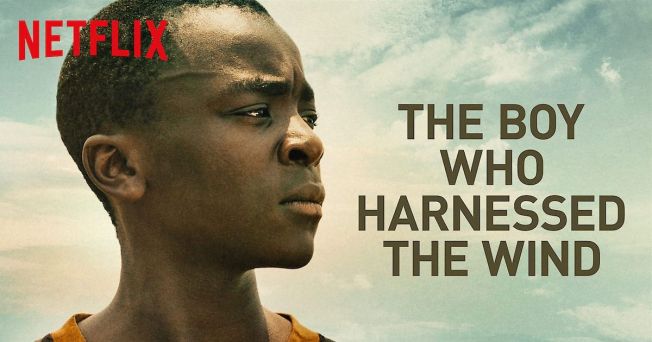 The Boy Who Harnessed the Wind

This is the story of a young Malawian boy, William Kamkwamba, who makes a windmill out of scraps to bring water to his father’s fields. William is at the heart of the film, surrounded by family, in a country approaching chaos.

The cast is excellent … and so is the windmill.

The tale unfolds in a small, rural village, as it dragged towards starvation by a drought complicated by politics.

These overwhelming themes lie across the story, but we are taken inside them to life in an everyday family as seen through the eyes of the only boy in that family. He is a young teenager who is clever with his hands, and keen to be one of the cool crowd … and in his village that means being able to go to school.

I grew up in rural southern Africa and I know how precious school is to children there. It is a way out, hope for the whole family. I also remember the daily ingenuity needed to keep machinery working in societies outside the ‘throw-away’ habits of those with plenty. William’s life is an example of the possibilities of education and recycling, and both are depicted with real respect.

Kenyan actor, fourteen-year-old Maxwell Simba, who plays Kamkwamba, is the same age as the young inventor was when he struggled to build his windmill to save his family. Simba’s performance is absorbing, and carries home brilliantly the meaning of rain to communities that depend on it.

Chiwetel Ejiofor, a well-known British actor of Nigerian descent, is the film’s director. He also plays William Kamkwamba’s father, Trywell. Initially Ejiofor did not intend to take the role but, by the time research and casting for the film were complete, he realised that he was the right age to play such a man. So he does.

Together he, Trywell, and his son William, dominate the film but they also allow a powerful hand to the women, even those no longer there. In one scene William’s grandmother and her brick-making ability are discussed. Such skills were unusual for women of her generation, and it seems that her problem-solving determination lives on in William.

Around the characters the cultural side of village life, and the national context, are made clear. Much of the filming is done in and around the Kamkwamba’s home village of Wimbe itself which adds to the authenticity. Food, school, marriage, politics, death, and the indignities that surround the distribution of food aid, are all given roles. So too is the tree-hungry nature of the tobacco industry, and the disturbing shadow of climate change.

To me the mix is relevant and urgent, and the central story intimate enough to care deeply about. It is carefully told, and even more impressive, it is true.

I’m not sure what locals think of the accents, but I appreciate the feel that the use of subtitles and the Chichewa language give the film … perhaps that is because, deep down, I want to believe that Africa has told this story itself.

My verdict – absolutely worth seeing. I loved it.

Here are two links – the second includes a trailer of the film: